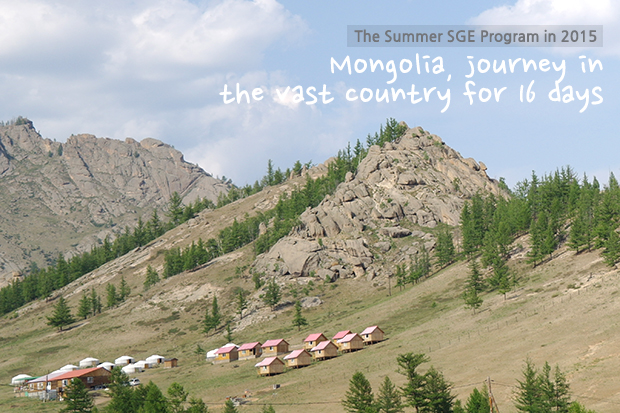 “Blue sky of Mongolia.” Mongolia, located between China and Russia, is a country endowed with vast meadows and beautiful sky. People who visit Mongolia for the first time often gaze at the sky – they are so amazed by the clouds beautifully floating in the sky. When we think of Mongolia, we envision Mongolian people riding their horses through the meadows. Aside from its beautiful landscape, Mongolia is also world-famous for its Naadam Festival and Gorkhi-Terelj National Park. In order to get to know Mongolia better, Kookmin University’s Summer SGE (Sungkok Global Exposure) 2015 selected 15 College of Law students to explore this mysterious but attractive country. Aside from traveling to Mongolia, the students attended lectures on Mongolian language and Mongolian law. 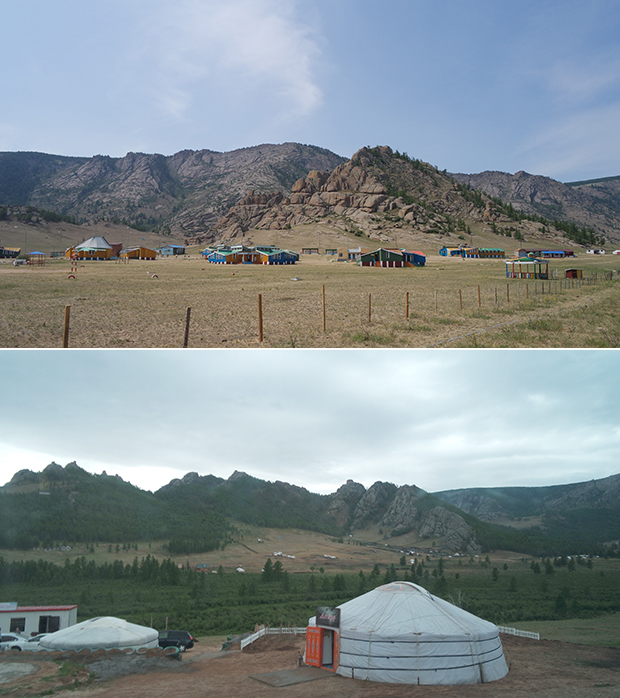 ▲ The traditional house ‘Ger’ located at the Gorkhi-Terelj National Park.

The Mongolian territory is about 15 times the size of South Korea’s land area; however, its population is just about three million people. Since 1 million people reside in the capital Ulaanbaatar, there are only a few Mongolians who still live in the traditional house locally known as ‘Ger.’ The traditional houses are installed in the vast meadows, except for the nomads and residents of the local area. For this reason, the famous attraction Gorkhi-Terelj National Park was built to depict the lives of Mongolians. The park is located about an hour away from Ulaanbaatar so it is easily accessible to tourists and other visitors. 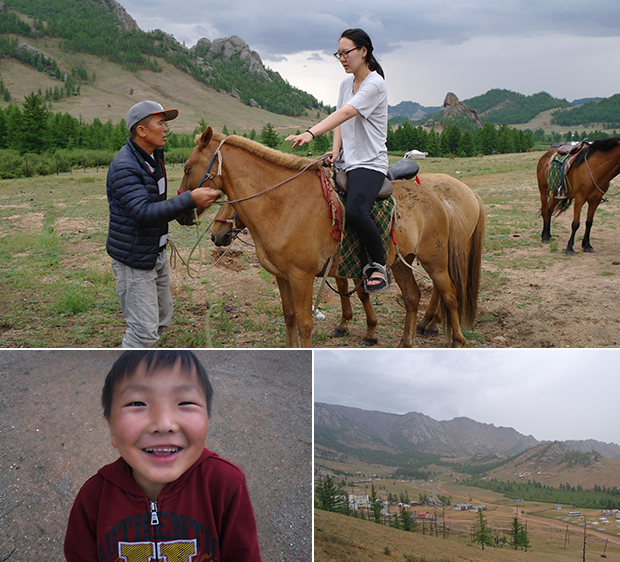 In the Gorkhi-Terelj National Park, visitors can see horses and many animals running freely across the wide meadow. It is also possible to experience horseback riding and camel riding. The traditional Mongolian dish ‘Horhog’ can also be tasted in the park. It consists of lamb and various vegetables served on a hot stone. Nonetheless, the traditional house ‘Ger’ is the main attraction in the park. Visitors can sleep and eat inside this tent-like abode so they can indirectly experience the life of the Mongolian nomads. On the other hand, the stars in the night sky provide the best view at the Gorkhi-Terelj National Park. Various constellations that can only be usually seen in textbooks, such as the Milky Way galaxy, can be seen at the park during the night (stargazing). 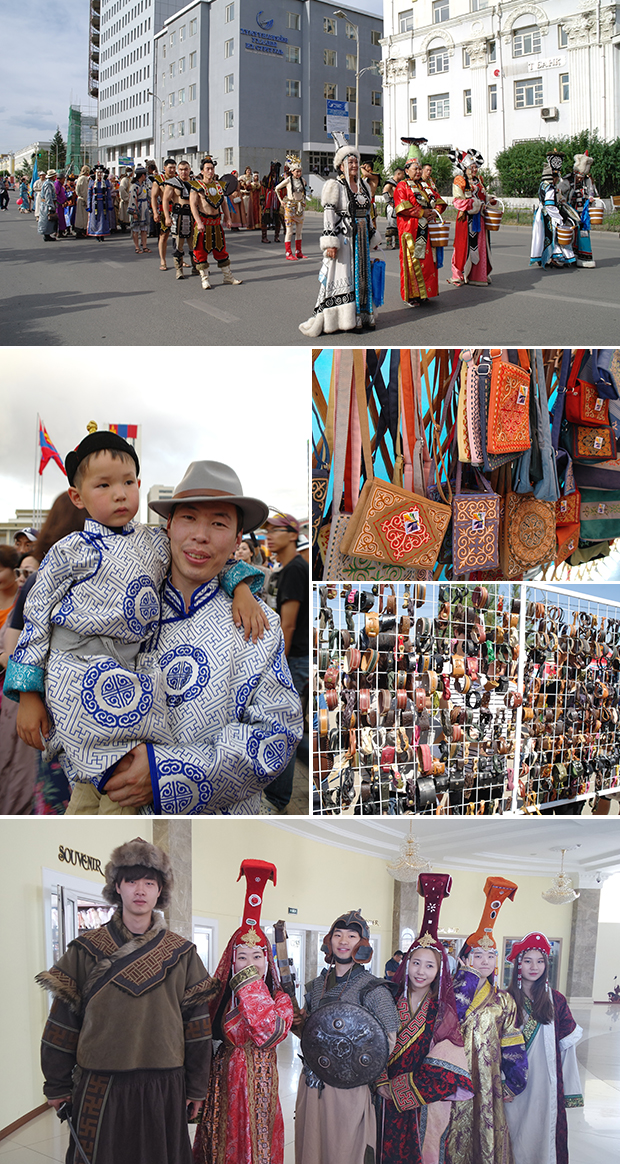 The Naadam Festival is the biggest annual event in Mongolia. It is autonomously held in all cities and towns every year, while the official event is held in Ulaanbaatar, the capital of Mongolia. Naadam Festival is composed of Mongolian traditional wrestling, archery, and horse-riding activities. The festival invigorates the entire Mongolian country for about three days. Hundreds of children and adults, who march down the street, wear costumes that reflect the different Mongolian tribes. Around the stadium, various traditional costumes, traditional dishes, and activities can be seen and experienced. During the Naadam Festival, most companies and restaurants are closed in Mongolia as almost all of its people enjoy the festivities during this period. 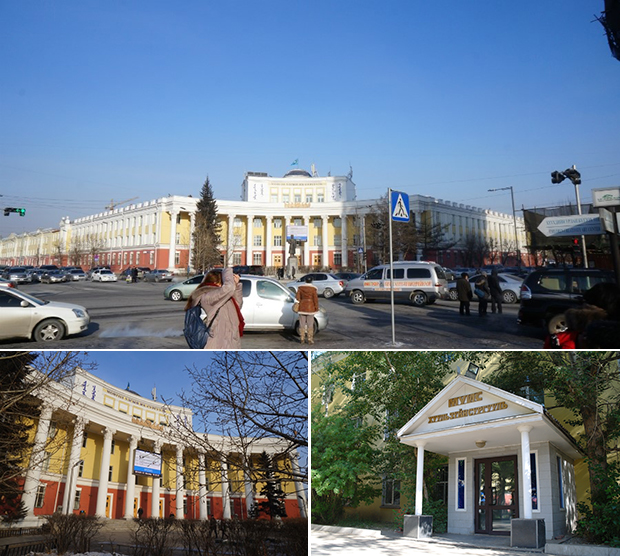 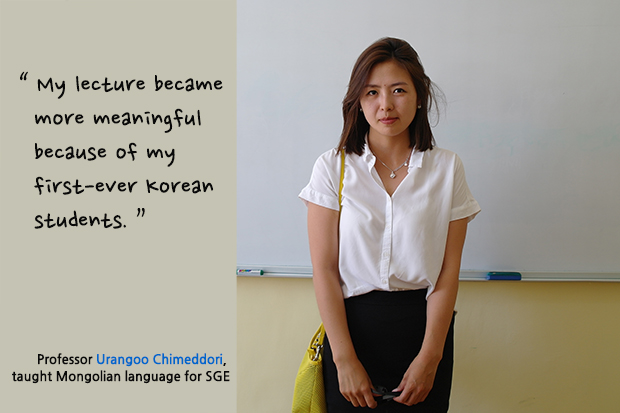 Q. You previously stayed in Korea for seven years but eventually, you came back to Mongolia. What is your current occupation?
I went to Korea right after graduation from the high school. Since the basic education curriculum of Mongolia lasts for ten years, we enter the university at 18 years old. After graduating from university, Mongolian students are already 22 years old so many of them go abroad to study. I went to Korea and studied the Korean language in a language school for about one year. After completing the language program, I enrolled at Seoul National University. After graduation from university, I worked in a Korean law firm for one year and then I came back to Mongolia. I passed the civil service examination so I am currently working at the National Security Council.

Q. What were the most difficult things that you experienced while studying in Korea?
Language barrier was the most challenging experience. In campus, I took the same courses like other Korean students even if I was a foreign student. It was very hard for me to follow the course lectures when I was a freshman. I wanted to enjoy various activities as a university student but I had a hectic schedule managing lectures, assignments, and exams. It was also very difficult to live alone away from my home and family. I needed people I could rely on and thankfully at that time, my Korean friends helped me a lot. I still keep in touch with my Korean friends from the university and whenever I have a chance to visit Korea, I also meet up with them.

Q. What were your thoughts about the Mongolian language class that you conducted with the Korean students who were part of the SGE program?
Actually, they were my very first Korean students, so the experience was more meaningful for me. The time allotted for the lectures was too short so I did not know what to teach and from where to start. However, the students were able to follow my lectures so well. We really had a good time in the Mongolian class, but it was also good to see the students’ interest in Mongolian culture and daily life during break times. During the last class, I gave them an exam and I was surprised that everyone got excellent scores. At the beginning, I was very worried whether they could follow my lectures, but I really had a pleasant and good time with my Korean students. 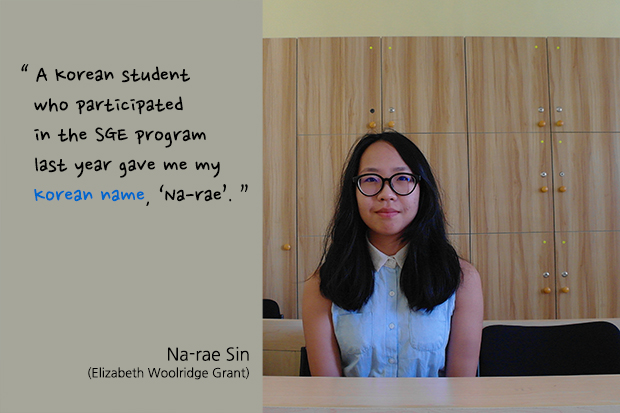 Q. Unlike other Mongolian students, you have a Korean name (‘Na-rae’). What is the story behind your Korean name?
Through the SGE program, I have helped Korean students for about three times now. During the two weeks that the program is held, I am able to make new friends and gain good memories. Last year, one of the Korean students named me in Korean. We also gave Mongolian names to the Korean students and at that time, they gave me a name in Korean. My real name is Woolridge Grant meaning ‘smart and jewel’ in Mongolian. Mongolian names also have meanings. At that time, my Korean friend gave me a last name so my Korean name became ‘Na-rae Sin’ (laughs).

Q. There seem to be many differences in university culture between Mongolia and Korea. What are these differences?
The biggest difference is in how the lectures are conducted. In Mongolia, all lectures are based on discussions so we ask and answer questions repeatedly for two hours. This way, there is no student who falls asleep. It is also very difficult to get good grades. It is really hard to get a grade of A so most of the students receive B or C. Some professors give credit at their discretion so sometimes, all of the students get C. Moreover, the buildings in our campus are in different locations. In Korea, the buildings are located within the campus but in Mongolia, the colleges can be located in different places. For instance, the College of Law is located downtown while other colleges are located in other areas. This is also the reason why there is a strong bond between juniors and seniors. In and around the university, the prices of foods are very cheap. There is a cafeteria in the university but it is more like a kiosk for light snacks. In general, we can get a sandwich or hotdog for about 2,000 Tugrik (1,400 Won) to 4,000 Tugrik. Lastly, many people wonder whether Mongolians really ride horses very well. Almost all of us grew up riding horses. Starting from childhood, most Mongolians can easily ride a horse. However, some people who were born in the city cannot ride a horse at all. Nonetheless, some of my friends’ ideal man is someone who can ride a horse very well.

Q. What is your dream in life?
I dream of becoming a lawyer someday so I am studying at the College of Law. After graduating from university, I plan to have an internship for about two years and then I will take the qualifying exam to become a professional lawyer. But before accomplishing these, I want to study in the U.S.A. That’s why I am saving money by having a part-time job. I am not yet sure about my future career, but I want to do something meaningful by studying law.

Kookmin University is the only Korean university that has an exchange student program with MUIS University. Mongolia established its constitution in 1992. Regardless of the relatively short period of its history of law, the legal exchange between Mongolia and Korea is very active. Furthermore, students from Korea and Mongolia visit each other’s country to strengthen the two countries’ ties. This mutual relationship allows the Mongolian and Korean students to help each other overcome various challenges. It is expected that solid relationship among the students will be built through the SGE program.

[Another Kookmin*People] A girl from America, Malina Fairchild