[Another Kookmin*People] A girl from America, Malina Fairchild 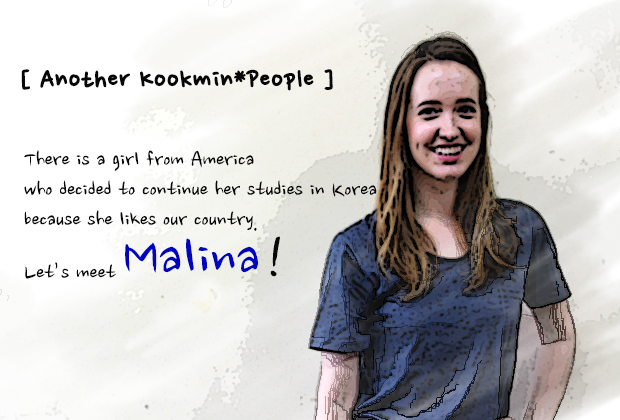 We often see foreign students walking inside the campus. This is no longer a surprising sight. Due to the active exchange among nations and universities, there are many foreign students who take courses at Kookmin University. Most of them stay in Korea as exchange students for a short period of time. However, there is a Kookmin*People with a strong ambition who wants to finish her studies in Korea. Which country has a close relationship with Korea? Maybe, nine out of ten people will confidently say, ‘America.’ America is a country that feels so near, and yet it is so far away. In this edition of <Another*Kookmin People>, we shall meet Malina, the girl from America.

Q. Please briefly introduce yourself.
Hello! I am Malina Fairchid from Indiana State, U.S.A. I am 22 years old and a foreign student at Kookmin University, majoring in Public Administration and Public Policy. I transferred to Kookmin University in 2013 and currently, I am staying in the dormitory.

Q. How did you come to Korea?
Six years ago, my elder brother came to Korea as an English instructor. He taught in an institute located in Naju-si, Jeollanam-do, Korea. At that time, I came to Korea to visit my brother and I became interested your country. During my ten days of stay here, I was really impressed with Korea. So when I came back to America, I kept thinking of studying in Korea so here I am now. 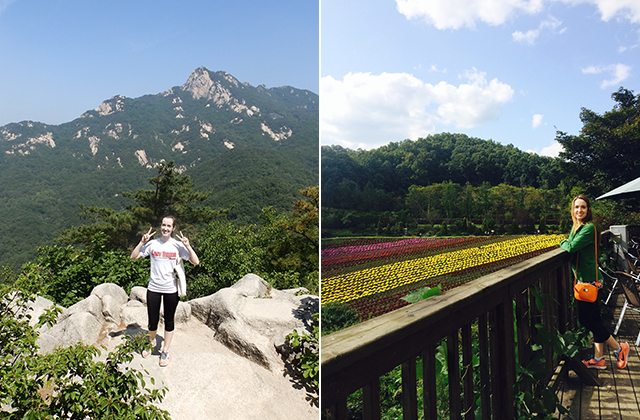 Q. You speak Korean very well. How did you study the Korean language?
I studied the Korean language by myself. I thought Korea was very attractive when I first came here so I decided to study Korean through the internet and books. During weekends, I went to a Korean Sunday school to learn Korean. I went to the Sunday School for four semesters but I learned much more about Korean culture than the language itself.

Q. I heard that you have a Korean name. How did you happen to have one?
Oh. First of all, my Korean name is Da-ye Bae. When I was in America six years ago, my Korean best friend gave me that name. My Korean name has neither special meaning nor any relationship with my real name Malina (laughs). ‘Bae’ sounds similar to my true last name Fairchild. ‘Da-ye’ was given to me by my friend because she said it is a pretty name. I like my Korean name a lot so whenever I meet new Korean friends, I introduce myself with both my American and Korean name. I am often called as ‘Da-ye.’ 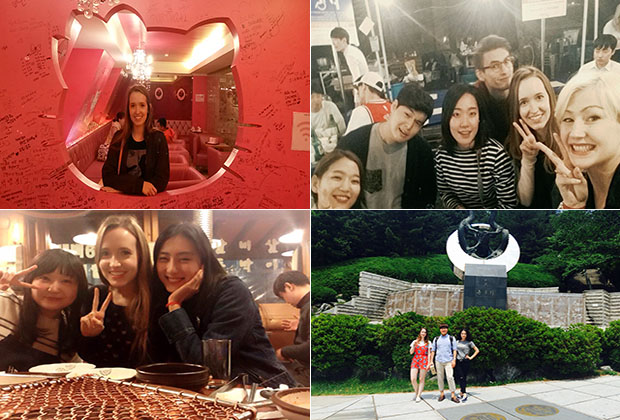 Q. What was your first impression about Korea?
Korea is really different from Indiana, where I live in the U.S. First of all, Indiana is located in the countryside so for me, Seoul is very impressive as it appears like a big city. People seem to be always busy in Seoul. In the beginning, I was really out of my element but eventually, I got used to living such a busy city life (laughs). Also, I was impressed by the Korean people who welcomed me. I thought people felt uncomfortable or shy around me but they approached me first. I really appreciate their gesture of friendship.

Q. What are your memorable activities while living in Korea?
I participated in the Global Buddy program at Kookmin University last semester. My buddy introduced many hot spots in Seoul. I have studied Korean by myself but I still have a lot of difficulties in the language. Whenever I had a hard time, my buddy helped me a lot. Through the Global Buddy program, I was able to adapt to Korean culture and environment much faster. Another memorable activity was my visit to the demilitarized zone (DMZ). I don’t know much about the relationship between South and North Korea, but it was an interesting experience as I visited Panmunjom and DMZ. 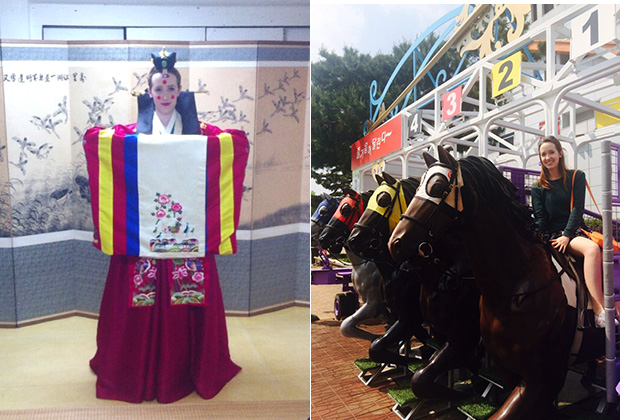 Q. How do you spend your spare time?
I meet friends and travel around Korea. I like to experience something new and travel a lot so I have already visited many places. Currently, I have a part-time job that I enjoy. I work in a café near Hansung University. I work inside the kitchen where I cook pasta and other dishes. It has been three months since I started and now, I’m used to my job. The people I work with are very kind so I enjoy working with them. 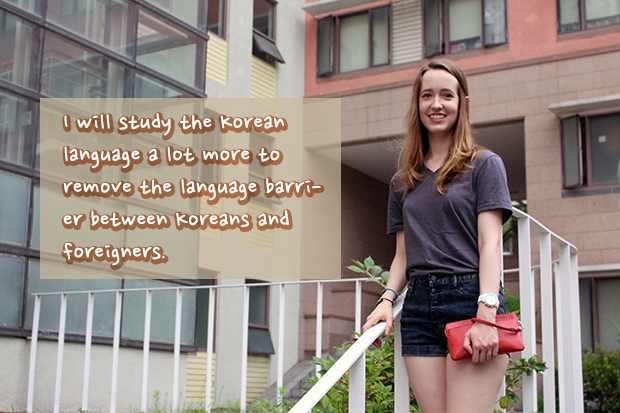 Q. What is your goal?
My dream is to become a linguist. I also want to interpret or translate Korean language into English since I feel that there is a necessity for language interpretation or translation while living in Korea. For instance, my English-speaking friend went to the Korean immigration office and she said that she had a hard time because there was no one in the office who could speak English well. The immigration office is a place where many foreigners go to process some documents. However, there are only a few personnel there who can speak English. Moreover, it was also hard to communicate with the doctor when I became sick. As I experienced such difficulties, I want to help people who need translation services (Korean to English and vice versa). So I will study the Korean language a lot more to remove the language barrier between Koreans and foreigners.

Korean students go to America under the exchange student program and to learn about the English language. But Malina came to Korea to continue her studies simply because she likes Korea.