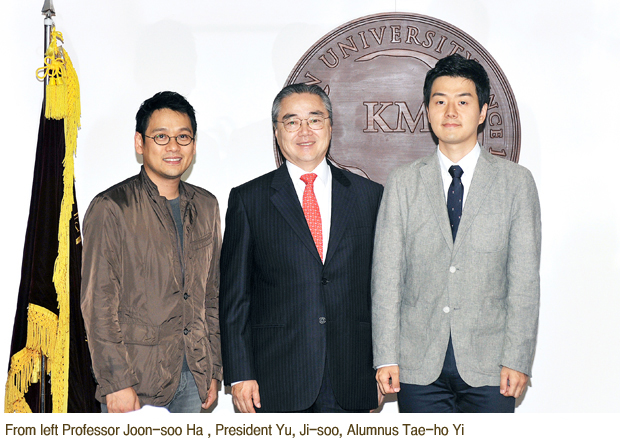 Alumnus Tae-ho Yi from the Department of Visual Design in 2008 was selected as a Fulbright grantee by the U.S. Department of State.

Fulbright scholarship is the topnotch program supported by the U.S. Department of State and operated by the Korean-American Educational Commission for Korean university students and in case of studying abroad, it supports round-trip airfare as well as tuition, dormitory fee, living expenses, and insurance for two years. Since it supports a maximum $40,000 for the first year and $30,000 for the second year, the competition is fierce and qualification for applicants is very strict.

For this, the document screening process requires official English score (more than 100 points for TOEFL iBT or 7 points for IELTS), academic performance at the undergraduate course (more than 75% out of 100%), major-related essay or thesis, three letters of recommendation that can prove academic excellence, self-introduction, and detailed academic plan. After two months of document review, the final grantee is selected through English interview with 10 interviewers.

Q. Summarize the preparation process for a Fulbright grantee.
Korean-American Educational Commission (KAEC) decides various policies on the selection of grantee and operation of Fulbright program. KAEC accepts applications of those who are preparing for master’s or doctorate course at the start of July. Among those who passed the preliminary document screening, the secondary in-depth interview is promoted and in general, the interview is provided between the end of August to early September. The interview is progressed in English by the professors specialized in major academic fields and the interview time is about 15 minutes per person.

The scholarship granted to me is ‘Degree Study’ that is designed as a scholarship program for master’s course. It took about 16 months to prepare. There are several things to be prepared before application; application form, English score (TOEFL), portfolio of major field of study (only those in the field of arts), letter of recommendation (more than three people), certification of graduation in English, and English transcript. Since academic plan and self-introduction that should be included in the overall application are very important, I obtained information from those who were previously granted in the program while editing and reviewing the documents for several times. I started preparing for the interview two weeks before the result of the document screening was announced. Also, I practiced the expected interview questions in an English academy for about a month before going to work while having casual conversations with a native speaker introduced by my friend for two hours during weekends.

Q. What do you think is the merit that helped you to be selected in the program?
I think I have an excellent interview. Unlike other interviewees, I have the interview for 25 minutes. There were several difficult questions and at that time, I honestly answered that I didn’t know and I would study about it because I find it interesting. Since the interviewers carefully review the application documents, I sincerely answered for the area that I fully knew. There was a photo of an old lady in the portfolio and the interviewers asked a lot about that photo. While comfortably answering about the old lady in the photo, I felt a relaxing interview atmosphere. Of course, I did my best to prepare for the things required in each process of the application.

Q. Feeling after being selected in the Fulbright program and future direction and plan
I would not have been selected as a scholarship grantee if not for the good education and excellent faculty in the school. The topnotch faculty from the major field of my study developed me for four years through various opinions and methods. At this point, I don’t have a detailed plan or great ambition for my future; however, I hope that my future actions will be good and beneficial to the world. Also, I expect to live in a new environment that is completely different from the world where I have lived until today. I still have several more months until the application to the graduate course, so I plan to come up with a better portfolio and apply to the university. 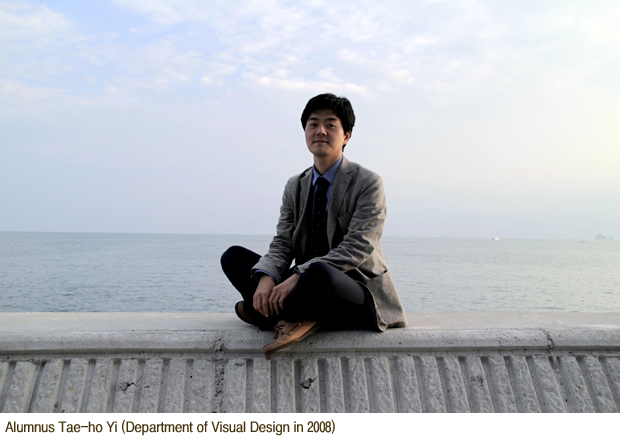 Q. Leave a comment to the juniors of Kookmin University
Since opportunities are everywhere in the undergraduate school, I encourage you to attempt various possible ‘tries’ and ‘practices.’ What is important during the undergraduate course is to set your future direction, rather than producing results or outcomes. It is also good to have a little bit of persistence and favorable taste on the things that you want to do. You have good companies right next you and excellent teachers in front of you. Therefore, try to get as much inspiration as possible. Do not be intimated by others’ thoughts and environment, but try hard in search for your own things.

Q. Tell us what you do for a living.
Currently, I produce TV advertisements, promotional videos, campaigns, music videos, and video arts in an image studio called Camera Design. With good friends, I practice the field to be further studied from the basics. Maybe at the point of this new publication, I will already be independently working outside the company.

Professor Joon-soo Ha (Department of Entertainment Design) who helped in the selection of the alumnus Tae-ho Yi delivers the expression as “The Fulbright grantees are working as the leaders of all sectors in the society not only in Korea but also in the world. Even the foreign countries have great respect to the Fulbright grantees, recognizing them as the best among the elites. Nonetheless, what they do is not for individual success but to return and serve what they achieved through the scholarship grant. Including Tae-ho Yi, Kookmin University produced two Fulbright grantees until now. Although both of them are from the design major, there are many intellectuals in other major fields of study. In line with this, I believe that more people will be granted under the Fulbright program. As a Fulbright grantee, I will diligently exert efforts so that more Kookmin University students can apply and be selected for the Fulbright scholarship regardless of majors.”

■ About Fulbright scholarship
J. William Fulbright, the first-term senator of Arkansas in the U.S., proposed a bill in September 1945 to financially support educational exchange between the U.S. and other countries. This bill was passed in the 79th general meeting and on August 1, 1946, it was legally enacted with the signature of President Harry Truman.

All countries operating the Fulbright program are financially and administratively supported by the U.S. government. Korea is one of the countries that operate the Fulbright program in support of both the Korean and U.S. government. The Korean-American Educational Commission that supervises the educational exchange between Korea and the U.S. is unofficially known as “Fulbright Commission,” and it is an independent educational promotion organization that is supervised and financially supported by both countries.

For 62 years of the Fulbright program operation in Korea, KAEC produced about 3,095 Korean and 2,330 American scholarship grantees (total of 5,425 people – including those who extended the program). Many Korean Fulbright grantees have taken significant position in the major Korean educational organizations and the American Fulbright grantees also contribute to the improvement of mutual understanding between Korea and America, especially in the field of education. KAEC receives annual budget from the Korean and U.S. government. Also, considerable amount of finances in KAEC is supported by educational organizations, schools where the scholarship grantees are attending, and other resources every year.

Awarded in the 2013 Reddot Design Award / Department of Industrial Design