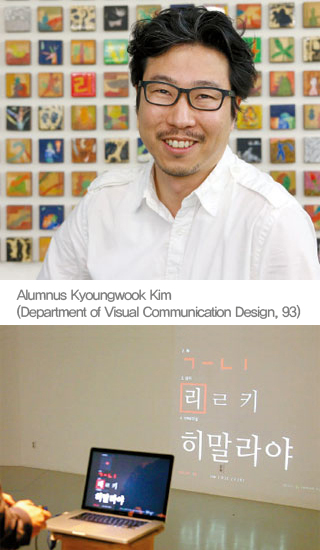 Kyoungwook Kim (39), CEO of the design studio Crosswalk Lab, is the person receiving attention during Hangul Proclamation Day, which is celebrating 566 years. He wonthe iF design award of Germany, which is one of the worlds best design prizes, this February with Hangul (Korean Character). It was even inthe Gold category which is one of the best, along with Apple’s iPad 2, BMW M 6 and Samsung’s Smart TV.

This work isn’t the result of developing a beautiful font. It attracted the judge’s attention instead by showing a new input method of Hangul. The judgesare descendents of Gutenberg who are interested in typing and printing techniques and gave extremely good comments about the interface representing Hangul’s unique format.

The prize winning work was inspired in that Hangul is made up from characters consisting of strokes. So it was realized that Hangul input can be done even if we don’t have a computer keyboard. The only thing we need is a joystick. For example, we can make the character ‘Gan (간)’ by moving sticks in order of ㄱㅣㅡㄴ. But the character ‘Gon(곤)’ can also be made like this so you can save characters which can be made with same number of strokes and place themin the software and pick them when you want to use them.

‘When we have to type many letters fast, the keyboard or Chunjiin (which is the method of key input method)is of course much more effective. However, character writing with strokes is much better when we input 3 or 4 letters only for searching and use small devices with small space such as cameras, TVs, remote controls and watches.

Mr. Kim graduated from Kookmin’s Department of Visual Communication Design and flew to the USA to study in 1999, where he then worked at the NHNUS branch as a design section chief. He worked as a design team leader in the NHN Japan branch as well. Did he become a patriot overseas? The idea popped into his brain 5 years ago in the USA. He was interested in the features of Korean when he saw people’s works which created new significancewith Hangul (Korean character) and heard stories about them. As a professional interface designer, he focused on connecting computers and Hangul in a more friendly way.

“I’d like to create a system for Hangul users to use to the max. For example, ㄹ, ㅎ letters located in the middle of keyboard are not the most frequently used letters. As I saw unnatural placement of Hangul in existing alphabet keyboards, I felt it was not ideal,” he said.

Since winning,  he has been pushing forward the project named Lettering with the Stroke.Commercializingit is an urgent priority. However, it hasn’t attracted domestic companies yet because most users still don’t feel uncomfortable with the keyboard input method. On the contrary, China and Japan are showing their interest because they have to rely on English pronunciation when they use keyboards, as their letters are too many.

He suggested that our Hangul has a weakness because it can be read by changing itsshape to sounds in the brain, in contrast with Chinese characters which can be recognized as pictures even though they have complicated strokes. So the part of the brain used for Hangul is different and it takes a longer time to recognize the letters.

“I think how we technically make up for this weakness is important even though Hangul is already outstanding,” he said.