This prize according to a recently published paper (Rotordynamic Performance of Shimmed Gas Foil Bearings for Oil-Free Turbochargers) was selected as the best thesis among all papers printed in the Journal of Tribology, which is the SCI journal of ASME. It focused on reducing engine weight and maximizing efficiency in existing diesel automobiles by replacing the turbocharger’s bearing, which uses engine oil as a lubricant, with a highly efficient air bearing.

The turbocharger is the technology that recycles energy by driving a small turbine, which burns emissions directly inside the automobile engine instead of producing burned emissions outside the car. This makes cars more powerful, enabling them to use fuel more effectively through the torque obtained from the small turbine by compressing outside suction air and injecting it into the combustion chamber. It was made for aircraft engines at first but in recent days, most diesel motorcars from major domestic and foreign motor companies use this.

Diesel motorcars with turbochargers are being produced in the domestic market; however, development and production are still difficult because of the lack of highly efficiency bearing technology. So Professor Kim’s team has, for 2 years, been developing eco friendly automobile technology with support from KIST. Through this, we can expect improvement in domestic eco friendly diesel automobile technology with high fuel efficiency. 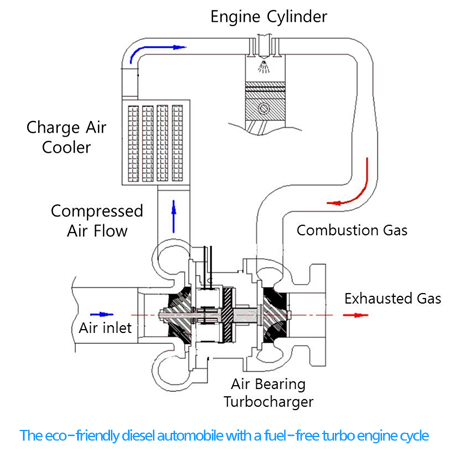 Professor Kim also won the ASME Journal of Tribology Best Paper Award in 2011 with a research paper titled: “Oil-free Bearings for Next Generation Helicopter Turbo Propellers,” supported by NASA when he worked at KIST before joining KMU. When we consider someone winning the best paper award of the SCI academic journal of the ASME from the domestic academic world, it is a very rare case and Professor Kim won the prize for 2 consecutive years, this year and last. His technical skills on highly efficient bearing research and development seem to be recognized worldwide.