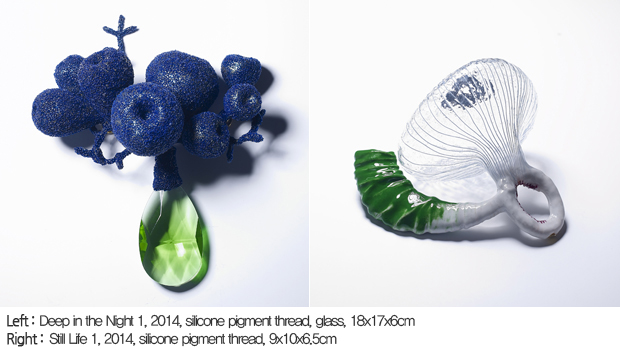 Jewelry designer Seul-gi Gwon (Class of 2002, Metalwork and Jewelry, College of Design, Kookmin University) was selected as the grand winner of the 2014 Art Jewelry Forum Artists Award by the Art Jewelry Forum, USA. She uses silicon as the main material in designing her jewelries.

The Art Jewelry Forum Artists Award is a prestigious international award established for world-class young jewelry designers 35 years old and below. It recognizes the functionality, innovation, and individuality of jewelry artists. In 2014, 123 artists from 27 countries participated in the event. In the competition, the finalists were evaluated based on originality of the artwork, depth of design concept, and craftsmanship. Seul-gi Gwon of Kookmin University (Class of 2002, Department of Metalwork and Jewelry) and Hui-ju Kim (Class of 2007, Metalwork and Jewelry, Graduate School) competed in the finals. Ultimately, Seul-gi Gwon had the honor of being the grand winner.

Gwon was chosen as the final winner because according to the judges, “She was able to express very beautiful and poetic transparency through silicon, glass, and fragments. Her work successfully combined poetic and classical elements and was organized in contemporary sense.” The judges also said, “The innovative and aesthetic arrangement of materials held our attraction.”

Gwon was granted an opportunity to exhibit her works in the Internationale Handwerksmesse in Munich on March 2015 with the other four finalists. She was also presented with USD 7,500 prize money. In a span of one year, she will be given various opportunities which include serving as a member of the Art Jewelry Forum and participating as a judge in the 2015 Art Jewelry Forum Artists Award.

Hong-seok Yun (Class of 2010, School of Computer Science) Wins in the Finals of the Microsoft …