Hong-seok Yun (Class of 2010, School of Computer Science) Wins in the Finals of the Microsoft Imagine Cup Korea 2015 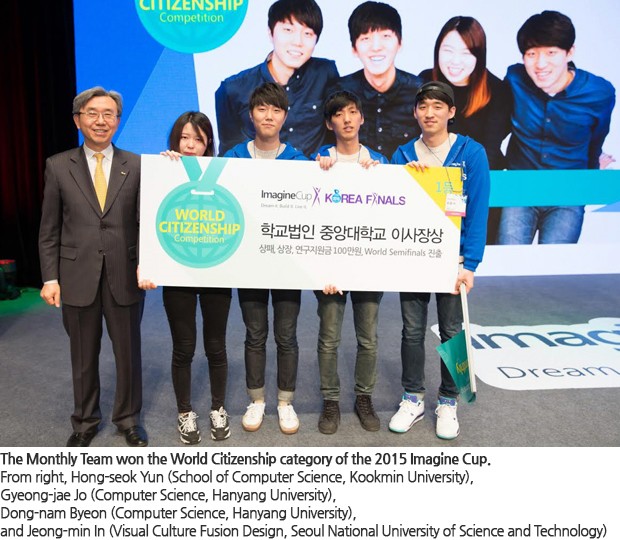 The 2015 Imagine Cup was hosted by Microsoft Korea. During the pre-match, Korea was represented by the Monthly Team of Hong-seok Yun (Class of 2010, Computer Science, Kookmin University) and they won in the World Citizenship category.

The Imagine Cup, now on its 13th year, is the world’s largest annual competition hosted by Microsoft that aims to hone the students’ technical capabilities. Any student older than 16 years can participate in the competition. The participants of the Imagine Cup competed against each other for a total of three “Game” categories. These categories were: entertainment and originality; “Software Innovation” that can change people’s lives; and “World Citizenship” that can generate ideas to overcome world problems.

Among 21 teams competing in the preliminary round, the final six teams were selected. They were given 30 minutes to present and demonstrate to the judges and audiences, and they also participated in the Q&A session. During the pre-match, the judges from the academe, industry, and audience screening group (composed of about 700 people) participated in the evaluation. The audience screening group initiated a lively atmosphere by asking smart questions to the finalists.

The Monthly Team of Hong-seok Yun won in the World Citizenship category with its “SafeDay” mobile application. The mobile app’s concept came from the notion that the voices of women (of childbearing age) change during their menstrual period. The team is expected to get the ticket and compete in the finals for the 2015 Imagine Cup that will be held in Seattle, USA. They will compete against the winners of the two other categories of the pre-match. 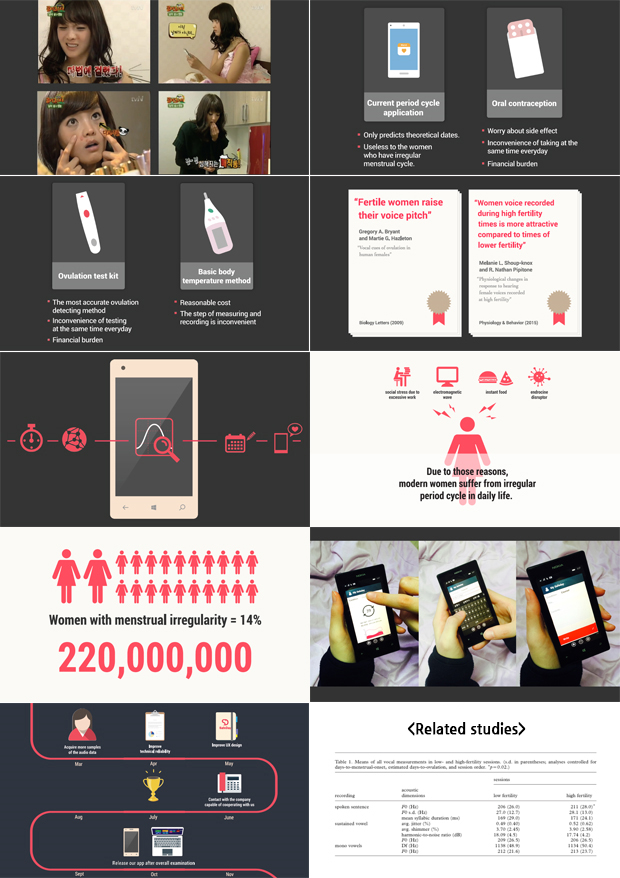 James Kim of Microsoft Korea said, “We will provide multilateral technical support and meaningful advice for the Korean representatives in order for them to have substantial accomplishments in the world stage.”

Meanwhile, Kookmin University concluded MOU on industry-university cooperation last January 2015 for the joint development of industry-university connected curriculum. Since then, the parties have jointly developed and implemented this particular curriculum/educational program for the development of students’ creative talents. On the other hand, the curriculum “Internet of Things (IoT)” utilizes Microsoft Windows phone and Microsoft Search Tool. It is expected to be applied in the Multidisciplinary Capstone Design program.

Seul-gi Gwon (Class of 2002, Department of Metalwork and Jewelry) Receives Top Award in the 20…