The International Design Biennale of Saint-Etienne Invites President Kyeong-ran Choi of the Graduate School of Techno Design as Curator; Installs Korean Hall in the Exhibit 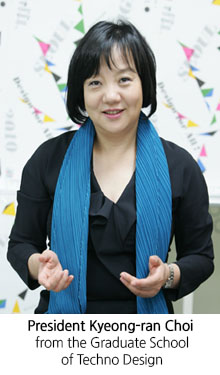 President Kyeong-ran Choi from the Graduate School of Techno Design was invited as a curator of the International Design Biennale with the theme “Vitality 2015: Beyond Craft & Design”. About 140 artworks of 30 craftsmen and designers were presented in a 400-square meter space.

The concept of this exhibition was about generalized modern craftsmanship, which aimed to use traditional arts in new ways and how these could be highlighted anew in our daily lives. Ultimately, the exhibition intended to show the possibility of mass-producing traditional culture-inspired arts and crafts and searched for opportunities towards the direction of commercialization.

This event was held in Saint-Etienne, France for about one month from March 12, 2015 to April 12, 2015. Saint-Etienne, designated as a UNESCO Design Creative City, has been transformed from an industrial city to design-art city. Seoul, South Korea was specially invited to the Biennale as a UNESCO Creative Sister City; thus, the Korean Hall was installed and presented here. About 30 craftsmen and designers participated in this biennial design event.

In this exhibition, Professor Kyeong-ran Choi and the Oriental Culture and Design Center (OCDC) specially planned the Korean-style Proust Chair in collaboration with the world-famous designer Alessandro Mendini and patchwork master craftsman Geum-seong Gang. The Soban (small tray-like table) was also presented in the exhibition; it was built through the collaboration of world-renowned architect Daniel Libeskind and Korean master carpenter Tae-hong Park.

During the Biennale exhibition, an international conference with crafts and design theme was supervised by the France Design Biennale and Oriental Culture & Design Center of Kookmin University.

President Kyeong-ran Choi said, “We will present the craftsmanship of Korea that is newly highlighted today in modern ways. The collaboration with world-renowned designers and Korean master craftsmen will provide a new aesthetic experience to people.”

Since holding the first event in 1998, the International Design Biennale of Saint-Etienne has sponsored the ninth event this year. It is a festival participated in by 45 countries and is one of the programs of the UNESCO Creative Cities of Design (with partners of the world ‘Citi du design’). As the most important event of Saint-Etienne, it offers not only creative design experience but also an opportunity for experimental exchange as well.

Seul-gi Gwon (Class of 2002, Department of Metalwork and Jewelry) Receives Top Award in the 20…