Yu-mi Jung wins the Ragazzi Award, the Nobel Prize of children’s publications, for two consecutive years, /Class of 2000 in the School of Fine Arts 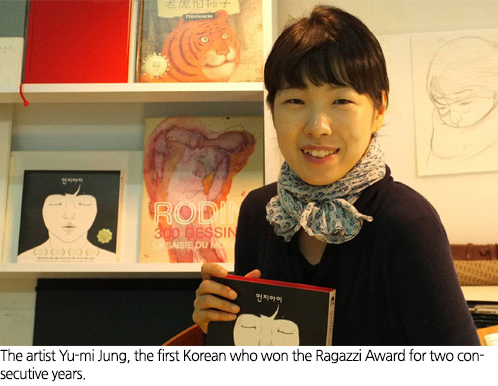 The artist Yu-mi Jung (34) was the first Korean who won the Ragazzi Award, considered as the Nobel Prize in children’s publications, for two consecutive years. Jung’s book, ‘My Small Doll House,’ was selected as the Excellent Prize in the fiction category. Last year, Jung was awarded with the Grand Prize of the New Horizon category (for countries outside Europe and North America) for her work, ‘Dust Kid.’

The Ragazzi Award, which welcomes its 50th anniversary this year, is the award supervised by the Bologna Children's Book Fair in Italy. For international children’s books, the Grand Prize and Excellent Prize are selected in four categories including fiction, non-fiction, new horizon, and opera prima (rookie award). The awarding ceremony will be held in Bologna on the 30th of next month, the opening day of the book fair.

Jung attained a splendid achievement by receiving the award for two consecutive years. She was too busy working on the last touches of her new picture books in her studio located in Seodaemun-gu, Seoul. Although she became the ‘rising star’ in the picture book industry by receiving the Ragazzi Award for two consecutive years, she was very cautious. Asked for the reason why she was selected as the winner by the award-giving body, she said, “Lots of hard work and endless revisions of my book for two years may be the reason for winning the prizes.”

‘My Small Doll House’ is the story of a little girl Eu-jin as she travels in a self-made doll house and shares things with other dolls in the house. When she gets out of the doll house, she was encouraged to understand herself and explore the vast world by going beyond the narrow space. This book will be published early next month.

Jung said, “I remember that my neighborhood friend asked me to show her the doll house that I made and at that time, I was ashamed. Through the picture book, I hope children in Eu-jin’s age will banish their inner fears and conflicts within themselves, and develop the capability to comfort others.”

The artist Jung graduated from the Department of Painting in Kookmin University and majored in animation direction in the Korean Academy Film Association. Her ability was acknowledged in the film industry as she won the Grand Prize in the World Festival of Animated Films – Animafest Zagreb in Croatia, which is one of the four major international animation festivals.

She created her picture books and animations through pencil drawings. While she works hard, the area around her little finger gets black because of the pencil’s lead content. “Since it is easy to revise my drawings with pencil, I can quickly make a story. Also, making detailed expressions is an advantage of using a pencil,” Jung added. She always read picture books when she was young so she highly recommends to parents to let their children read picture books. “A baby who reads picture books observes things in detail. By reading a picture book, it is possible to experience and imagine stories more vividly.”