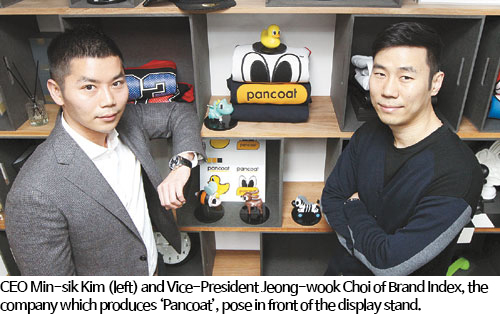 In the middle of this month, the Shanghai Fashion Show of a Korean brand ‘Pancoat’ was ranked No. 1 in the largest Chinese portal site Baidu. This milestone attracted the attention of Chinese fashionistas and consumers. The ‘Pancoat’ Fashion Show that featured Taiwanese model Wu Chun was broadcasted all over China, and gained considerable media coverage with about 120 local journalists.

According to the fashion industry report on the 29th, the Korean character and fashion brand ‘Pancoat’ increased its number of stores up to about 160 after only one year of opening its first store in China on June 2013. This Korean fashion fever is currently booming in China. ‘Pancoat’ has concluded a license partnership with Hongbang Group of China and within this year, the number of ‘Pancoat’ stores will increase up to 200 due to popular demand by the consumers.

‘Pancoat’ is considered to be one of the brands with the fastest growth in the Chinese market within the past five years. It was selected as the ‘Global Leading Brand 2014’ in the Global Brand Cultivation Project that has been promoted by the Ministry of Trade, Industry and Energy since 2009.

CEO Min-sik Kim and Vice-President Jeong-wook Choi of Brand Index (the company which produces ‘Pancoat’) are the ones responsible for the Korean fashion fever in China. These young businessmen who are in their 30s decided to create the ‘Pancoat’ brand in 2005 and started the business with 60 million Won in capital. When CEO Kim studied in the medical school of Yonsei University, he really liked fashion so he promoted it online or through electronic commerce. On the other hand, Vice-President Jeong-wook Choi graduated from the Department of Industrial Design in Kookmin University and after graduation, he entered the fashion industry by venturing into an online fashion business. When they first met, they became quickly acquainted with each other because of their shared interest in fashion. Eventually, they established the company Brand Index to realize their dreams. CEO Kim, who was good at accounting, took charge of administration. Vice-President Choi, who was talented in design, took over planning and marketing to create the well-loved fashion line ‘Pancoat.’

CEO Kim said, “When we launched Pancoat in 2009, we were not able to carry out marketing campaigns because our company was still small. So as our main strategy, we just concentrated on developing excellent products with strong colors and unique characters that are unforgettable.” He added, “Since we did not advertise the products, people called our products Duck T-shirt and eye T-shirt. In such a short time, our products (sold online) were all sold out.”

The key for the success of Pancoat was a clear character design that can be loved by anyone. The ‘big eyes’ used in animal characters attracted the fancy of adult consumers. Currently, the number of Pancoat stores in Korea is 125 and the annual sale of the previous year was 96 billion Won.