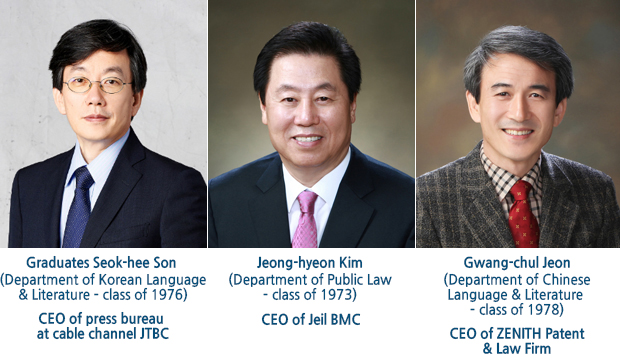 The Alumni Association of Kookmin University (President Jong-ung Yun) decided to award three people as winners of the ‘2015 Proud Kookmin People Award.’ The winners are ‘Seok-hee Son, the CEO of press bureau at cable channel JTBC,’ ‘Jung-hyun Kim, CEO of Jeil BMC,’ and ‘Gwang-chul Jeon, CEO of ZENITH Patent & Law Firm’. Especially, CEO Son of press bureau at JTBC was awarded for the ‘13th Song Kun-ho Prize’ last year and these awards were given in recognition of the contribution he made for the honor of Kookmin University by dedicating himself to his duty. Also, the family of President Sun-hui Park of Korea Dance Sport Association was awarded as the Proud Alumni Family and Professor Chang-ro Mun was awarded as Proud Kookmin Alumni. Also, CEO Sang-won Nam of ID & Planning Group won the achievement award. The awarding ceremony of the ‘Proud Kookmin People Award’ will be held at the New Year’s celebration ceremony of the Kookmin University Alumni Association in The Wein at Seocho Station at 6:30 p.m. on January 15, 2015 (Thurs.). The ‘Proud Kookmin People Award’ that welcomes the 26th event this year is an award given every year to the alumni of Kookmin University who elevated the status and honor of the university in the political relation, academy, finance, and cultural & arts. Since its first award to former Prime Minster Deok-wu Nam in 1986, it has been developed as the award with the greatest authority and prestige of Kookmin University that produced Assemblyman Maeng-wu Park, former Vice-Minister of Health & Welfare Geon-ik Son, former Assemblyman Yeong-dal Jang, and Editorial Writer Hwa-jong Baek of The Kukmin Daily.