Working as the Main Agent of Your Class

Entering college, many of you might have dreamt about studying what ‘you’ really wanted. In the case of the people who were interested in politics, being able to feel as if they are entering the National Assembly, or for those in psychology, to be like in a consultation company, etc. But things don`t always go just as you wanted. Still, even in college, you have studies to do which you don’t actually want to. Not long after we begin our college lives, we notice this fact and even before our first year ends, we get tired out.

Then is this unsolvable? Do we have to spend our entire college life always walking the streets like zombies? The answer would be “No”. There are actually some lectures that can act as a ‘breather’ in our busy schedules. Professors of those type of class don’t actually call it a ‘lecture’ since most of the progress of that class is done by the students. They usually require full participation from students, making quite a free and active atmosphere for the students to do some activities. Students can improve and refresh themselves, both internally and externally, eventually noticing at the end of the semester, that they actually got something great from the class.

Many of you reading this article might be struggling to find out these kinds of classes or to get specific information. So I brought here, through interviews with the professors, three classes that students might be interested in: ‘Talking with Confidence’, ‘Swimming’, and ‘Body Expressing’. 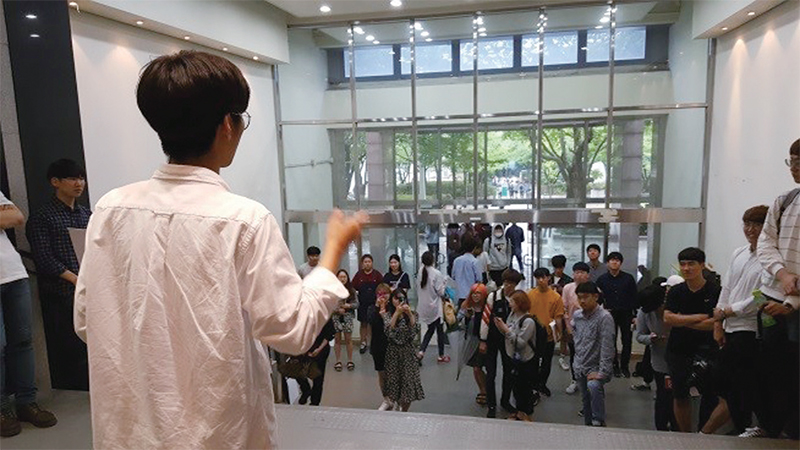 ▲ A student making a speech in ‘Talking with Confidence’ class.

Life is all about talking and presenting for a considerable amount of time in college. But since a whole lot of students in Korea haven’t learned ‘how’ to express themselves, they usually have a hard time on preparing and doing it. But we need not be worried, since we have a class just for those who are struggling with talks and presentations. Even if you already feel no single problem, it would be a great chance for you to earn a lot of things you might not expect.

Professor Eui Yong Lee is the creator of this class. By his faith that experience is the fundamental part of talking, the whole process of the class is mostly made by the student themselves. A lecture doesn’t take place most of the time. When the professor suggests some activities and practicing methods, the students should prepare and have a speech or discussion every week. Despite this fact, there is one thing for students who are willing to acquire some more theoretical content. This class adopts a KOCW (Korea Open Courseware) method, which means that you can see the lecture online, and then apply it to yourself when the class starts. Having activities like speeches and discussions, or role plays in front of the other students every week might seem quite busy and embarrassing for some of you. However, those times you spend and experiences you get would not be even a little bit meaningless. At the end of the semester, you would be able to see that most of the students who were having a hard time speaking in front of people, are actually now giving a speech in the middle of Kookmin University with little difficulty.

For those who have worries and concerns about giving a speech, Professor Lee advices some points to think about when speaking in front of people. The first is trust. Having trust in your audience is an important part of being confident and fluent. “How would you talk in front of them when you don’t even have faith in them?” Professor Lee says. He also stresses the importance of knowledge and persuasion. While talking to people, they won’t pay attention if you don’t have credibility, meaning if you fail to persuade them. And the basic factor for persuasion is knowledge, he says. If you have a lot of background and fully understand about what you are talking about, people will also get what you are talking about. Lastly, during the interview I received the so called ‘23 notes for having a speech’ made by the professor himself. I brought you, not all, but some notes that would be impressive.

23 notes for talking with confidence
1. Stick to your topic!
…
3. You’ll get nervous when it is unfamiliar. Practice and have a rehearsal in a similar place and atmosphere where you will present.
4. Believe the audience! They are just like the water that makes a swimmer float. You’ll float when you believe them.
10. Endure the first 3 minutes! Have a speech looking at your close friend.
11. ‘I’ am the original text! Tear the script. Make nothing to be there between you and the audience.
…
21. To receive an ovation, start and finish in time.
22. Greet people even if you don’t know them. Greeting is a door to ‘Talking’.

A lot of students always have a sport they are eager to learn. Not like soccer, badminton, or other sports that are not that hard to experience and learn, there actually are some that are not able to be seen and experienced easily. Swimming is one of them, leaving a lot of students just ‘wanting’ to learn it. But here, we have a class that can solve your problem, with an appropriate learning mechanism for students with different abilities.

Professor Dong Hyun Kim of this class was actually a swimming athlete who even participated in the Olympics, and who took 2nd place in the Asian Games. He always tries his best to make students understand the skills of swimming with an appropriate method and through a lot of experiences themselves. A few, but not many theoretical lectures are done, and most of the lesson is done at an external swimming pool. Less than 10,000won will be needed for each student for use of the swimming pool every week, which is not that expensive to learn the one sport that you always wanted to. Because of the schedule of the external swimming pool, the class is mostly on Sundays, spending about 8 hours a day. Even so, students are still able to have plenty of break time and can concentrate more, learning with a great efficiency because of the continuity of the learning process. There are three levels of the lesson for students’ different abilities: Beginning, Intermediate, and Advanced. And not only the professor himself, but also his colleagues from when he was a professional athlete come to give a lesson.

Not only the class that students can actively participate exists, but also the professor is giving an opportunity for the students who want to complete a Life Guard license. Even the student in the beginning level can apply for it if he/she is eager to try and practice for the license exam. And the greater part is that students can apply for it with a discounted price. At the end of the interview, the professor asked one simple thing for the students of Kookmin University. As a professor of Sports major, he is quite regretful to see that the recognition toward sports is getting lower, compared to the past. He says, “We had the most developed sport facilities in Seoul, back in the 1970’s.” So he urges students to be more interested in the sports-related activities in Kookmin University and to always be eager to request from the school whatever they feel they need for a more efficient sports life. 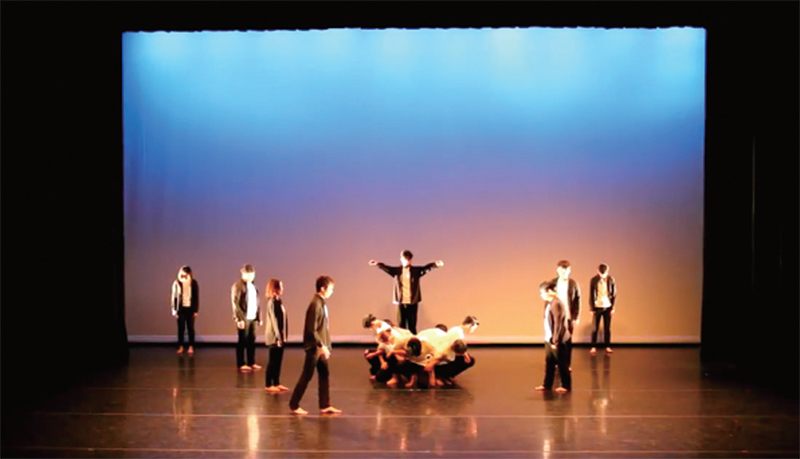 ▲ Students from class of 'Body-Expressing' performing in Concert Hall.

Getting stressed out hiding what you feel is a common situation in college. But you’ll have a great chance to get rid of all of that stress with this class: Body-Expressing.

Like the classes introduced previously, Professor Mi-Ha Lee of this class lets the students design most of the class. She gives students one topic and simply demonstrates how to use your body to express that topic. Then, after exchanging opinions for a short period of time, students come out to the stage as groups and express what they feel about that topic. According to the professor, students are not even a bit shy in doing the activities. “At first, being a part of a group makes it easier for them to do the activities. And as time goes on, as they are expressing their own deepest feelings, they can concentrate and be more passionate in doing it.”

The most interesting part in this class is the performance students will execute at the end of the semester. At the Concert Hall of Kookmin University, they will have a performance which is prepared all by themselves. Professor Lee says she gets surprised every semester to see students showing professional skills while performing. Even students who were clumsy at the start were no exception. And this meaningful experience even inspired some students to change their major to dancing.

A Special Field Trip for Students from Harlem