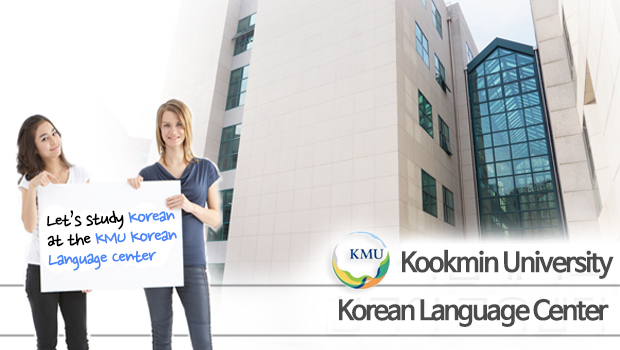 Youth around the world are increasingly becoming interested in Korea because of the popularity of the “Korean Wave,” led by K-Pop and K-Dramas, and the country’s rapid transformation and growth on the world stage. This has resulted in more and more foreign students seeking to complete their majors in Korea. As most conventional education institutions in Korea require Test of Proficiency in Korean (TOPIK) scores, a key requirement for these foreign students is learning Korean, and that presents a formidable task for most of them. But worry not, as Kookmin University’s Korean Language Center is here to help. The KMU Korean Language Center provides language training for foreign students who find the Korean language difficult, who want a fun way to learn Korean, and who hope to experience Korean culture. So, let’s learn more about the KMU Korean Language Center. 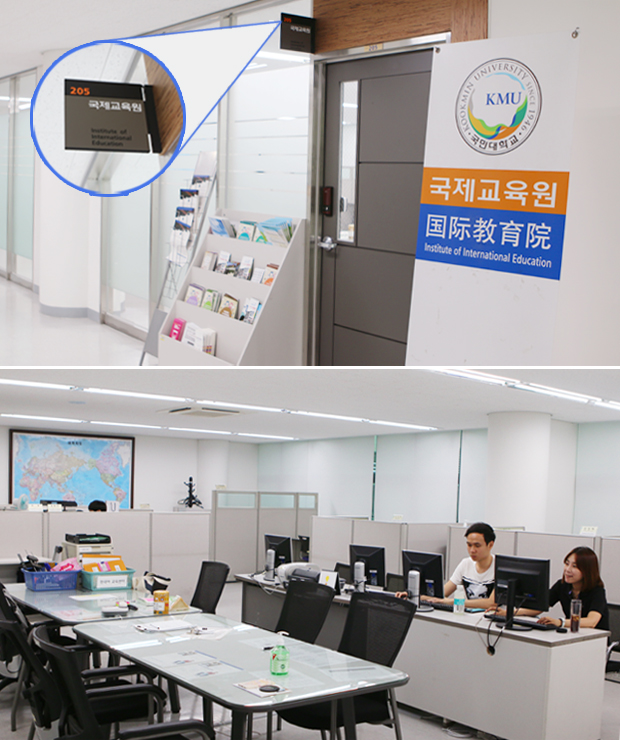 KMU’s Korean Language Center provides a wide range of programs from regular to short-term courses. Students are tested on their Korean and placed in classes according to proficiency levels. Classes are small, with around 10 to 15 students, and each class’ head teacher is responsible for the students, overseeing attendance, consultation, and curriculum management. The program is basically divided into four sections: writing, reading, grammar, and speaking. All classes are taught with a focus on teacher-student communication so that foreign students can easily keep pace with the program.

The Language Center also has facilities and space to assist foreign students in learning, daily life, and social activities. For example, there is a break room where students can talk and interact with each other, and there are recreational facilities for playing table tennis, air hockey, and even table-top soccer. The Center is also equipped with Wi-Fi. So students have plenty of options for unwinding from the stresses of studying. With a neat and clean environment and a range of learning and leisure facilities, KMU’s Korean Language Center is not only the best place for students from around the world to learn Korean, but also where they can interact with people from different cultures and build networks and friendships.

The education program at the Korean Language Center includes various off-campus education visits in addition to in-class language education. For each proficiency level, the off-campus visit program allows students to experience traditional Korean customs or visit famous Korean sites. It means they can learn Korean culture through actual experiences while also having fun and making great memories. As well as site visits, students can participate in other on-and-off campus events, such as Korean writing/ speech contests, cinema day, and tea-tastings. Through these diverse events and programs, foreign students can gain a better understanding of Korean culture as they enjoy a wide-range of experiences. 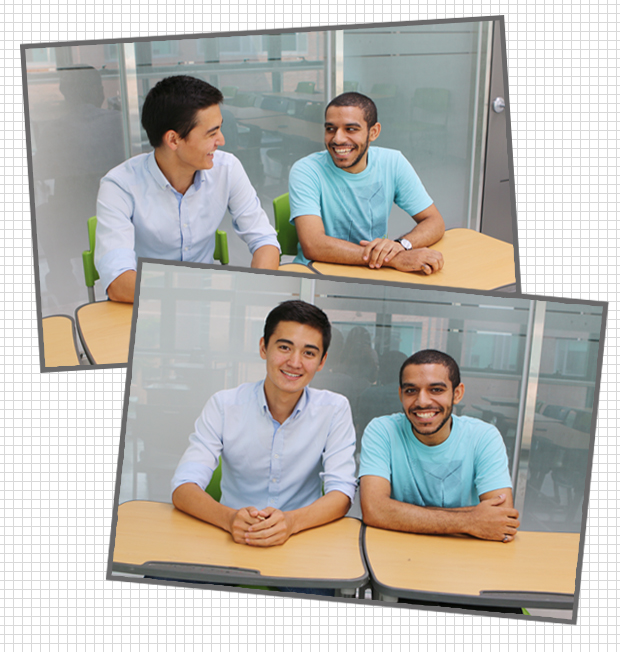 We interviewed two students who first met at the KMU Korean Language Center and became close friends while studying Korean together. When they first started their studies in Korea, neither spoke Korean and both were overwhelmed by Korean college life. But now, as they prepare for the TOPIK level 4 exam, they speak like typical Koreans in their 20’s, even using popular slang. Here’s see what Valiulin Dastan and Almutawa Hanni had to say. 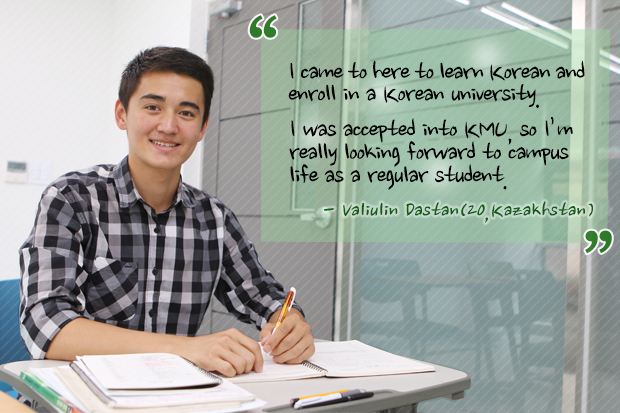 Q. What brought you to Korea?
I came to Korea specifically to learn Korean and enroll in a Korean university. When I was pondering my future during high school, I became interested in trade. So I considered studying abroad in either the United States or Korea, but I chose Korea as it shares many cultural similarities with Kazakhstan. When I finally got here, I was indeed able to make many friends, and as my Korean gets better, my hopes grow. So I am really enjoying studying here (laughs).

Q. It sounds like you are having a fun time. So how did you end up choosing the KMU Korean Language Center over other institutions?
As soon as I graduated from high school, I visited many study-abroad consultancies in Kazakhstan and they all recommended the KMU Korean Language Center. This was because the application timeline coincided exactly with my graduation date. After I started my studies here, I was very satisfied, and so I’ve been studying here since Level 1 and I’m just about to complete Level 4. Then I’ll start college life. Actually, my application to enroll in KMU was accepted just two weeks ago! (My sincerest congratulations!) Thank you (chuckles). I was accepted into KMU’s College of Business Administration and will start my studies in September. Soon, I’ll be studying at the Business Administration building instead of the Institute of International Education. I’m really looking forward to campus life as a regular student.

Q. What was the best part of studying at the Korean Language Center?
The friendly interaction with people from around the world, some of whom have become great friends, and the fact that the office staff and teachers really made me feel comfortable. Thanks to them, my time as a foreign student went smoothly. I really liked the KMU campus too, especially the sports gound. 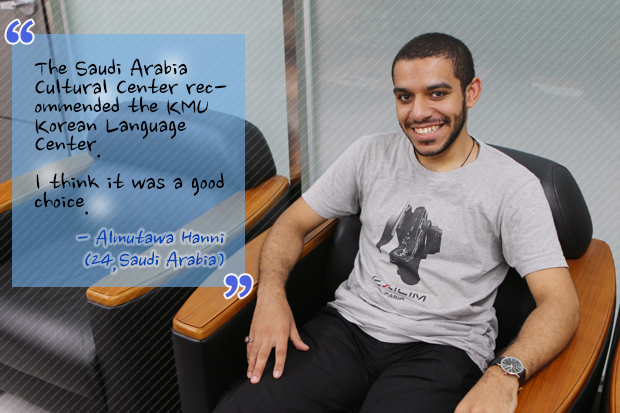 Q. Why did you choose to come to Korea, Hanni?
I was working here at a Saudi Arabian company. While in that job, I dreamed of new experiences and a new career and studying Korean was the first step in fulfilling that dream. (Can you tell us what this dream is?) I want to learn the culture and language of many different countries around the world, so I decided to start with Korea. Once I’ve learned enough about Korea, I plan to study in China or Japan. For now, I’m preparing for admissions to KMU next March. I want to major in electrical engineering.

Q. What was it like after you actually started the program?
I am very satisfied. In particular, my teacher always talks to me a lot no matter where we meet, which has really helped my Korean improve. And if I have any issues, my teacher always helps immediately, which has been great. Also, I was able to meet and spend time with people from around the world, and even made friends like Dastan. Also, there’s a Saudi Club in KMU, so I can study comfortably here as well as give my prayers.

We’ve just heard from two foreign students who are studying in Korea as the first step in achieving their dreams for the future. If you want to start fulfilling your dream in Korea, KMU’s Korean Language Center will not only provide you with the best language education, but you will find a place that eases the emotional strain and loneliness of studying abroad. If fact, the Center covers all aspects of studying in Korea for foreign students, even things new students might not have considered. This is what makes KMU’s Korean Language Center a trustworthy partner for foreigners studying in Korea.