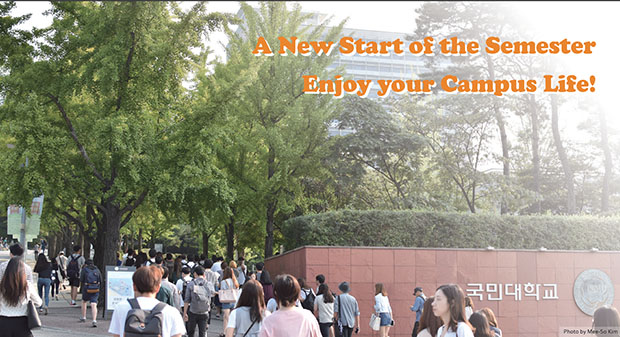 When you were a freshman, you may have heard this. “Freshmen should have more fun rather than studying.” This is because you have more time to prepare for your career. However it is not practical at this time since the domestic job market is getting increasingly fierce. The unemployment rate of the younger generation is at its highest in history. This means if you do not start to plan and prepare for your career, you may not have a job that suits your expectation.

A fast changing society will not wait for you
In the past, there were not many undergraduate students. This made situations easier for graduating university students when they looked for new jobs. Thus, it was possible for freshmen to have more fun than to focus on their studies because of the favorable conditions. However, as times change, situations change as well especially after the IMF, which was the situation that the Korean government was short of foreign currency to repay its debts to foreign creditors. Therefore, the Korean government borrowed huge amount of US dollars under the condition to take a massive structural reform not just only for the private sectors but also for the public sectors. The Korean economy went through massive structural reforms. It became a general trend for corporations to use temporary employees rather than to hire permanent employees in order to increase employment flexibility. In addition, unlike in the recent past, there are many job seekers who have university degrees in Korean society. This puts pressure on job seekers to be more competitive than before. That is why so-called ‘SPEC’ is a big issue for all university students. SPEC is another word that is used to describe the form of qualification in Korean society. Students spend a lot of time and money to prepare for SPEC such as taking tests to earn licenses, internships and to learn how to speak English fluently. In fact, most students start this preparing process when they are juniors in university but actually it is necessary to take action when they are freshmen. They can therefore do extra-curricular activities like internships later on when the time comes. This is because most internships require TOEIC/TOEFL scores or at least higher than average school grades. That requirement should be met in advance. Students who think it is time to have fun and not study when they are freshmen will be in trouble later on when they want to apply for any extra-curricular activities because they will not be ready.

The main reason behind freshmens’lack of eagerness on their majors and studies
A main problem of this matter is the students' uncertainty and confusions regarding their majors. According to professor Dong Hee Lee, Department of Business Administration at Kookmin University, students do not choose their majors based on their aptitude. They base their decisions on the name value of the best university to which they can apply with their final university entrance exam scores. This causes students to waste their time finding out whether they like their majors or not. Some students even write the university entrance exam for a second or third time to be accepted by a university with a better name. Thus, freshmen cannot focus on their majors. If students get the chance to find their aptitude, they should do it. They should then seek the major that best suits their aptitudes and then select an appropriate university. However, normally this is done in the opposite way.

Professor Dong Hee Lee also emphasized that while you are a freshmen it is important to know what your major is like and what you can do with it after graduation. This is necessary because if not known thoroughly, you cannot judge whether it is interesting to pursue later for career. In addition to this, if students do not know their majors and just study for graduation, they will not be able to get decent job opportunities even with great cover letter writing skills. This is because they will not have competitive contents to write down on their cover letters to distinguish themselves from others. If it is enjoyable for them, it really helps them to study thoroughly, to focus harder and to run towards it at their best, which is the most efficient and effective time management.

Time is given to everyone equally so what makes life different is what people do with this time. Nothing is too late in life but it is always better to start early just like the old saying “the early bird catches the worm.” Thus, freshmen year is important and this will obviously decide whether someone can be more successful in getting a decent job and achieve their goals. This is because time and a fast changing society will not wait for anyone.