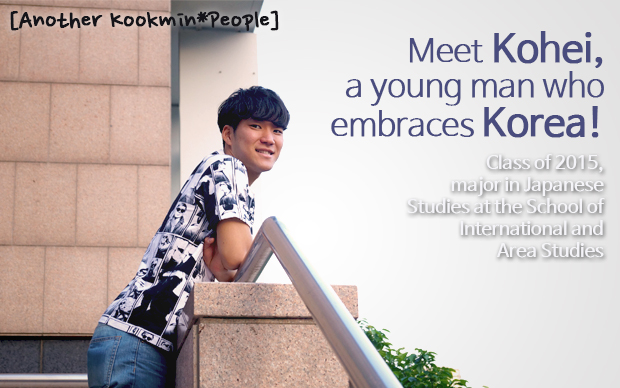 The scorching heat of the sun beats down on Kookmin University campus in the hot summer month of June. Because of the upcoming final exams, pens inside the backpacks are taken out but they are not used for studying. Among the students who are daydreaming, there is a foreign student who concentrates on the lectures through his crystal clear eyes. He says that every moment in Korea is so joyful, especially the university life and cultural experiences during his travels, that his stay in Korea will be an unforgettably precious experience for him. This man is a Japanese exchange student named Kohei Kuhawara. Let’s meet Kohei who is enjoying his splendid youth more than others. 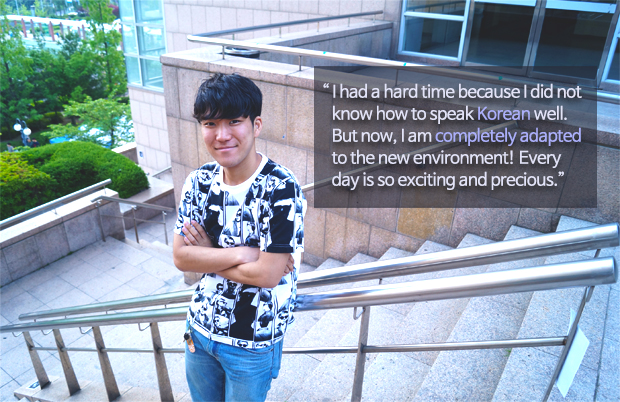 Q. Hello! I’ve heard that it has been more than three months since you came to Korea. How do you assess your life in Korea so far?
It has been three and a half months since I came to Korea. At the beginning, I really had a hard time because I did not know anything about the Korean language. But now, I can speak a little Korean so it helps me have simple conversations with Koreans and also, I can go out by myself. I can do more things by myself and I am more independent now as compared to my first few months of stay in Korea. I was also able to make many new Korean friends here so I spend more time with them than with my other foreign friends. I also have a lot of fun moments shared with my Korean friends.
About campus life, there were many challenging things. In general, the foreign exchange students make friends by participating in the ‘Global Buddy’ program of the Institute of International Education and experience culture by learning the Korean language. But in the beginning, I was not aware of such program so I was not able to participate at all. Since my Korean skill was inadequate, I had hard time checking information in the school’s website and printing out materials in the computer room. However, Korea is perfect when it comes to food. There is no problem with food. Korean food is delicious and I love it. I can eat any dish and enjoy the taste (laughs).

▲ Kohei says that the most joyful moment of his stay was experiencing Korean culture with his friends.

Q. You could have visited another country as an exchange student. Why did you choose to study in Korea?
Actually, I initially thought of going to America. But at that time, I became interested in Korea and after much thinking, I decided to study in Korea. At the time of my decision, I did not know anything about the Korean language so was I worried about how I would be able to cope in Korea. When I arrived in Korea, I saw many Korean students who studied and played hard. That made me curious about Korea and its culture. So I was able to set aside my worries. Also, English education in Korea is evaluated as excellent so I wanted to learn English in Korea.

▲ Kohei enjoys having picnic with his friends.

Q. I heard that you really like the culture and atmosphere in Korea. Specifically, what made you fall in love with Korea?
For one, it appealed to me how many people do things together in Korea. I like to eat and play with other people. Especially, it looks cool how students study hard when they need to and then play hard as well when time permits. Also, the jacket of my department looks cool. In Japan, there is no concept of uniform clothing that shows the identity of a particular department. That’s why in Korea, it looks good how the sense of belonging and friendship of the students in the department are shown in their clothes. Whether working alone or together, Koreans seemed to do their best in everything and that is the best thing that I love about Korean culture. 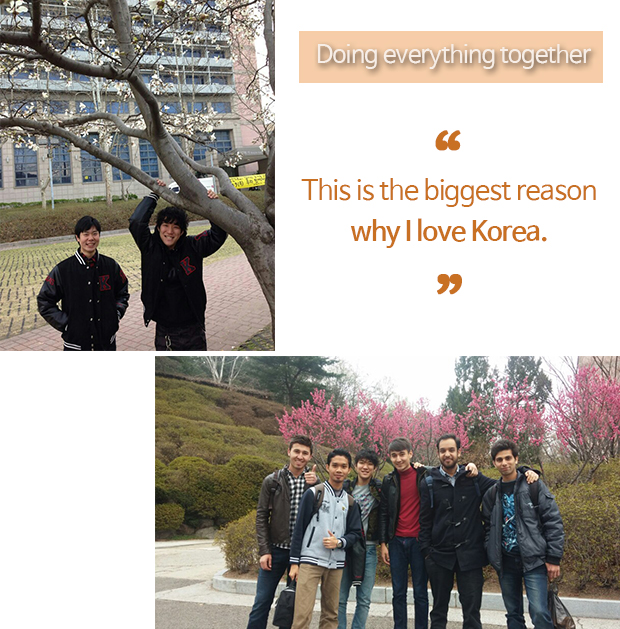 Q. How about your major study in Korea? What was your learning experience so far?
I was surprised that there are many lectures provided in English. In Japan, there are only several lectures taught in English and only foreign students take English lectures. But in Korea, many Korean students, along with foreign students, participate in lectures that are taught in English. I was really amazed about this. Also, many of my professors talk about Japan regardless of the course being taught. While seeing many similarities between Korea and Japan, I realize that our countries are connected in so many ways.

In addition, the lectures here are more interesting than that of Japan. In Japan, we do not study the courses in-depth but lectures in Korea are very systematically organized and complicated. So I have to do a lot of thinking when choosing the courses that I have to take. Also, a course is taught only once a week in Japan but in Korea, there are two sessions every week. So there are much more assignments that make me work harder (laugh). 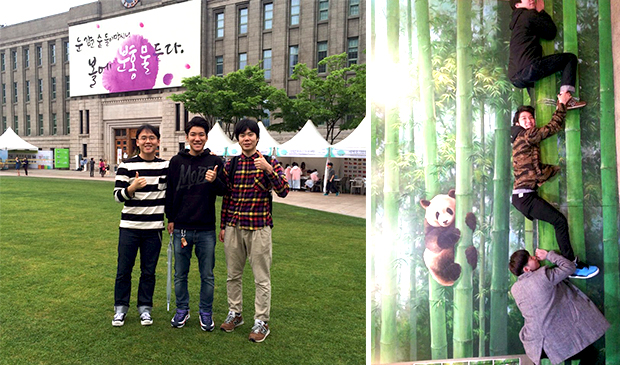 ▲ Hohei’s motto in life is to experience everything.

Q. There are many differences between Korea and Japan although they are very similar. When you compare the two countries’ university life and atmosphere among the young generation, what do you think are the differences?
The ultimate goal of Japanese students is to enter the university. Of course, this is somewhat the same in Korea but I think that there is another beginning upon entering university in Korea. Japanese university students do not really want to study in university. After entering the university, Japanese students have part-time jobs and are more interested in playing computer games rather than studying in general. It is also possible to only take the exams without taking lectures so many Japanese students neglect their studies. But in Korea, students realize the importance of studying so they study really hard. Many Japanese students think, ‘We only have to graduate from university.’ On the other hand, Korean students are concerned about their future paths and careers after graduation from university. I think those are the cultural differences between Korea and Japan. 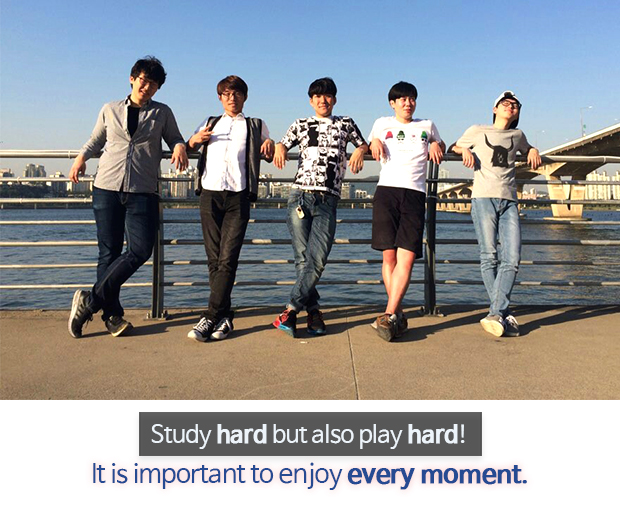 Q. What are the best things and hardest moments of your life while staying in Korea?
I was happy that many of my friends are interested in Japan and they actively talk to me. Many students seem to be interested in Japan in general. We often talk about Japan while attending lectures and since I am Japanese, I can explain about the things that Korean students want to know about. I am happy to give answers to the things that they want to know about. Sometimes, I even thought that I have to know Japan really well as Koreans know a lot about Japan. The most challenging thing in Korea is learning the Korean language. It is hard to read only Korean without English translation. Except for language-related difficulty, there is really no difficult moment that I can think of while living in Korea. It is always fun and exciting. 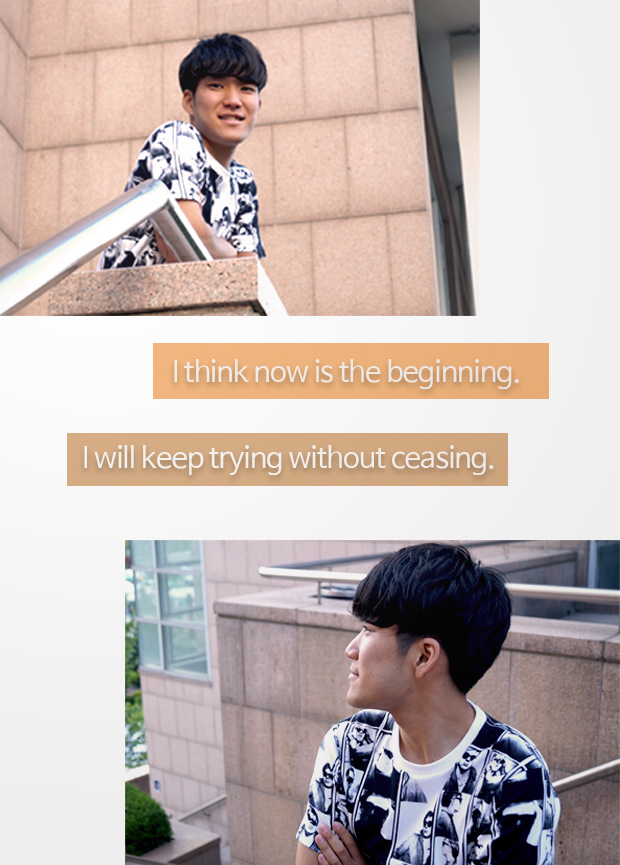 Q. What are your plans for the rest of your stay in Korea?
It has only been three months since I started my studies and life in Korea. I will study Korean language hard and play hard as well. After a year of studying in Korea, I will come back to Japan and return to school. I feel sorry about this. I will not only make unforgettable memories during my one-year stay in Korea but also, I will keep trying to do new things and explore other activities while I am in Korea.

When we listen to the word ‘youth,’ it often reminds us of university life. Particularly, it is widely accepted that university life holds special moments that are significant and not easily forgotten. Although university life also contains hardships and difficulties involving real-life issues like credit management, employment, and part-time jobs, we are still granted with the gift of ‘youth’ so we can still pursue the things that can make us happy. Kohei is a foreign student from Japan and he is filling every moment of his life with joy and happiness. Through this interview with him, we were able to glimpse at the value of ‘happiness’ that needs to be truly pursued by the youth of today.