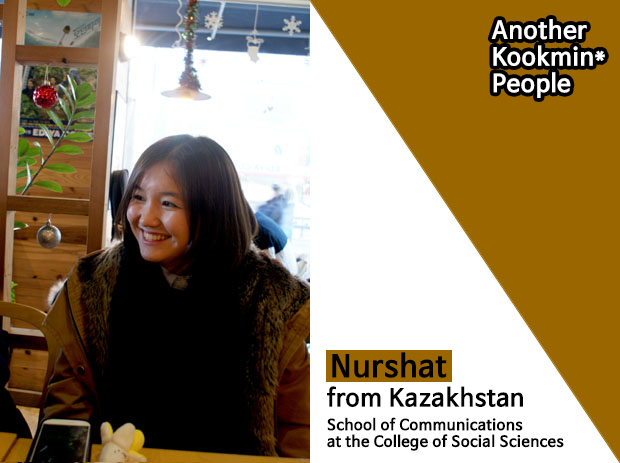 The heroine of ‘Another Kookmin*People’ this time is Nurshat from Kazakhstan. Nurshat was born in 1997 and turned 19 years old this year. In this interview, she shared how she was able to study with other older students at Kookmin University and the things that made her life difficult in Korea. Surprisingly, Nurshat has only stayed in Korea for six months but she is able to speak decent Korean. Let’s take a closer look at her daily life and studies in Korea.

Q. What is your main reason for coming to Korea?
The most fundamental reason is that I like Korea. Especially when the Korean fever started in Russia or Kazakhstan, I already felt that Korea was an attractive country. A lot of my friends go to the Korean Cultural Center. Also, I thought that Korea has a better educational system compared to that of Kazakhstan. In my country, there is no course registration but students are given fixed course schedules that they should take. So the students in Kazakhstan are forced to take courses that they do not like and it is one of the main drawbacks of the educational system in our country. However, in Korea, I can study any course that I want so for me that is the best part of Korean educational system.

Q. How serious is the Korean fever in Kazakhstan? 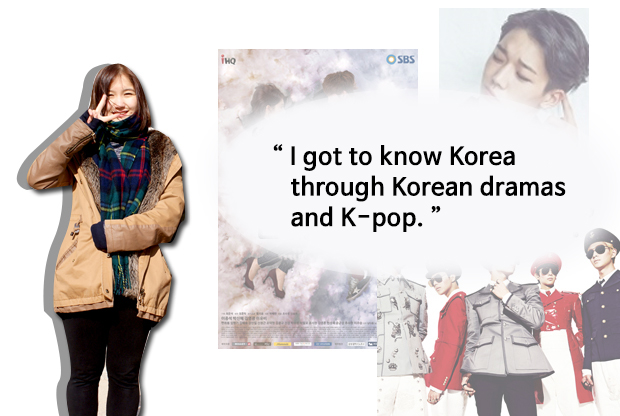 I watch Korean dramas a lot. Actually, I grew up watching Korean dramas. Since dramas were translated in Russian or Kazak, I thought those were just other foreign dramas, not Korean ones. When I found out about the official sound track of those dramas, I realized that they were Korean and as I was aware of Korean singers, I became interested in K-POP. I was able to watch the latest Korean dramas as these were translated in Russian and available in a video website. With the increased interest in Korea, there were many people in my country who wanted to learn about the Korean language. I was able to learn Korean through Korean dramas and K-pop. I went to the Korean Cultural Center Kazakhstan but since there were so many people who wanted to join, I had to wait for a year and a half to become accepted. Presently, I think there are many more people who want to study at the Korean Cultural Center.

The interview went well amidst the pleasant campus atmosphere.

Q. How were you able to enter the School of Communications?
Actually, I was interested in acting. Although I wanted to change my major to arts and physical education, my mother disapproved. My next choice was communications so it became my major. Since I am a freshman, I study about communications and advertisement but I will have further studies in communications in the future. Sometimes, I have a hard time understanding the professors’ lectures as they conduct the courses for both Korean and foreign students. There are many words that are hard to understand in the textbooks. So I think I have to exert more effort to overcome such difficulties.

Q. Is there any special experience that you had in Korea? 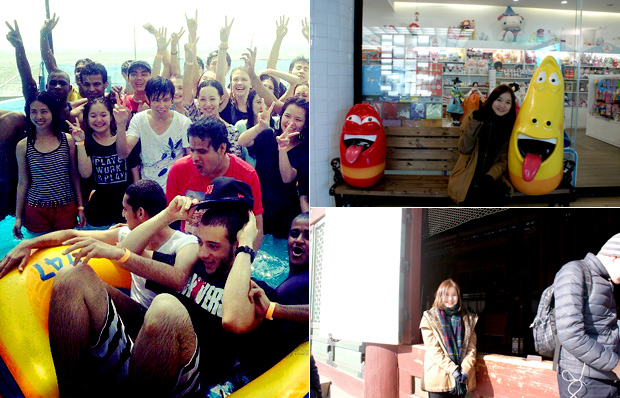 One time, foreign students got together and went to Yeongyang in Gyeongsangbuk-do. It was not like MT but a program promoted in the language school. This program included the actual experience of brewing the Korean alcoholic beverage. I was very shocked as people do not enjoy drinking alcoholic beverages in Kazakhstan. Kazakh people drink just a little for special occasions like birthdays so I was not used to drinking too much. But after coming to Korea, there were many gatherings that involved social drinking. It was a little bit hard for me to adjust at the beginning.

I also went to Gangneung right before starting the semester. I hurriedly planned the trip as I had to travel before starting classes at the university again. I was unexpectedly surprised as the place was good and water was clean. I went to the Gyeongbokgung Palace with my Korean friend. It was really beautiful so it became an unforgettable memory for me. I want to visit there one more time when spring comes.

Q. What were the things that made your life difficult while studying in Korea? 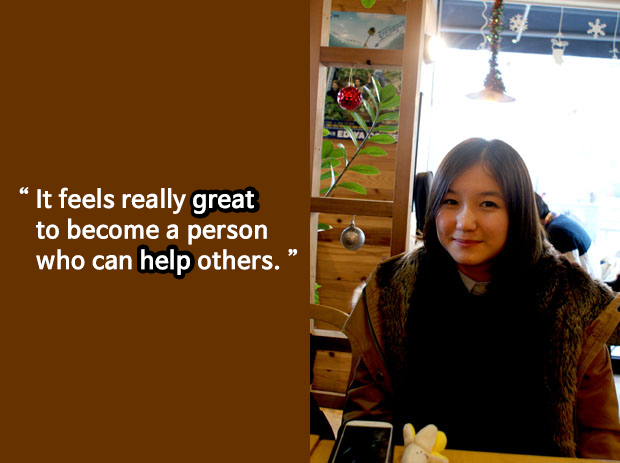 Unlike Korea, Kazakhstan provides basic education for 11 years. As I went to school earlier than usual, I was able to enter the university although I was born in 1997. At the beginning, it was difficult to make friends that were my age. But I have two older Chinese friends who have taken care of me since I came here. They said to me, “We are now your elder sisters as you don’t have any family in Korea.” I really appreciate their kindness and hospitality.

Recently, many students from Kazakhstan came to Kookmin University for their studies. Since most of them cannot speak Korean well, they come to me and ask me to solve certain problems for them. For instance, I accompany them to the doctor so they can communicate their symptoms or illness better. I also correct their assignments. Although I am the youngest, they say I am like their elder sister. When I first came to Korea, I had to manage everything myself since there was no person or center where I can ask for help. Although helping the students is hard, I feel great about myself whenever I’m able to help them.

Q. Is there any message that you want to share with other Kookmin*People? 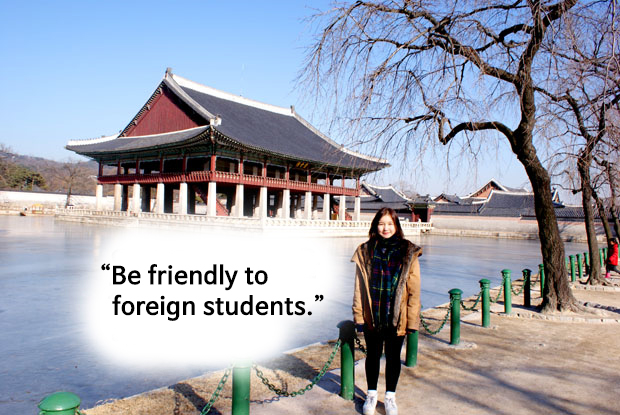 When a foreign student approaches you or comes close to you in campus, please be friendlier to him/her. I feel that the students from Asia are less welcomed than those from Europe or America. Of course, there are students without such idea but we are hurt because of unfriendly attitude of some Korean students. More particularly, I hope Korean students will be more welcoming and pleasant to Asian students. Also, thank you for showing us the beauty of Korea, especially those places that I have not been aware of previously. I will try to have good memories during my stay in Korea.

Nurshat looks like a teenage girl who likes K-POP and Korean idols. It is amazing to see her living alone in Korea away from her parents. She always thinks that she must not complain about difficult things that she experiences no matter how tough these are as she herself decided to come to Korea. Based from her way of thinking, I thought Nurshat is more mature than most teenagers in Korea. Nurshat confidently took a step forward to realize her dreams in Korea and I hope she will become successful in the future.