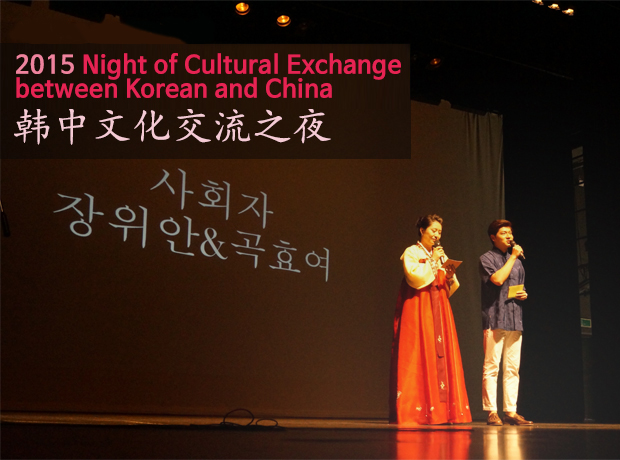 Last May 14, 2015 at sunset, the Grand Theater of the College of Arts at Kookmin University was full of cheer and applause when the festival for Korean and Chinese students was held. This festival, known as 2015 Night of Cultural Exchange between Korean and China, was held in order for the students of these two countries to get to know each other, and more importantly, to unite their minds and transcend their nationalities. The event was supervised by the Chinese Studies of the School of International and Area Studies of the College of Social Sciences. In the festival, various talents of the Korean and Chinese students were exhibited such as singing of Korean and Chinese songs, demonstrating martial arts, and acting in Chinese theatrical plays. The splendid presence of Yuan Zhang as the event’s host added excitement to the event. Let’s take a look into the energetic festival site of the Cultural Exchange Festival between Korean and China. 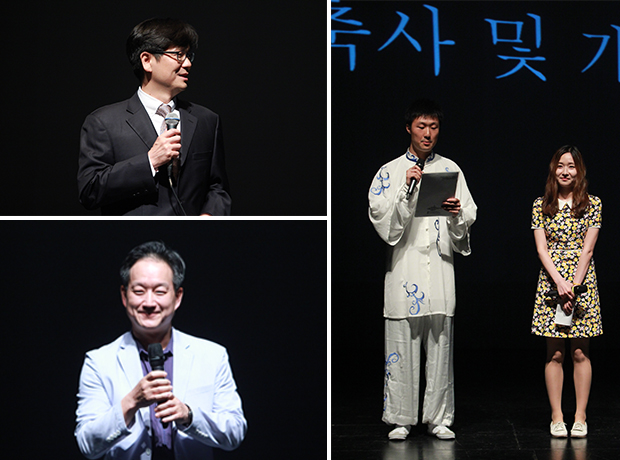 The 2015 Korea-China Cultural Exchange was hosted by the CK-II East Asia Frontier Project Team of the School of International and Area Studies at Kookmin University. The event was participated in by the students of Chinese Studies of the School of International and Area Studies; exchange students from countries like USA, Japan, India, and Malaysia; and students from other colleges including the College of Social Sciences. The actual event started with congratulatory addresses of Professor Jong-hak Eun from School of International and Area Studies and Vice-President In-jun Kim from the Office of Student Affairs. Opening addresses were given by the Korean and Chinese representatives. Vice-President In-jun Kim said, “I was once a foreign student in Italy so I know how important this event is to foreign students. I hope this will be a meaningful event for the Korean and Chinese students so they can communicate with and understand each other better.”

The students from the Chinese Studies of the School of International and Area Studies actively participated in the event that was planned and managed by the students themselves. The festival took about three weeks of preparation, in which 12 students participated in operations while 50 students participated in the performances. President Seung-hyeon Choi of Chinese Studies (Class of 2009, School of International and Area Studies) managed the overall event preparation and said, “Many students prepared really hard for a short period of time. What we prepared may not be enough but I hope you will enjoy the event as if you are participating as a member.” 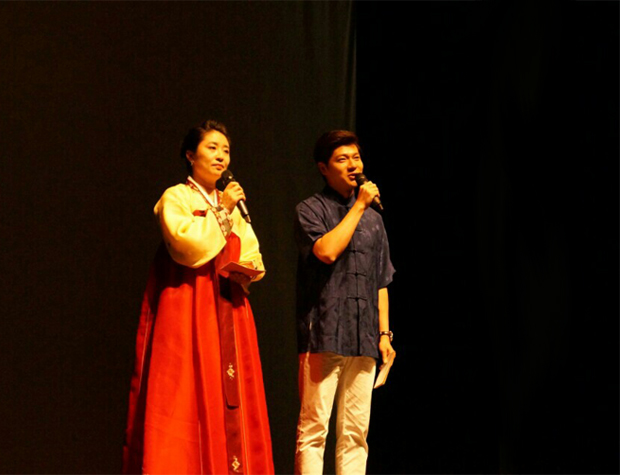 ▲ Professor Xiaoru Qu from the School of International and Area Studies planned
and hosted the event; special host Yuan Zhang

A very special guest visited Kookmin University just for the festival - Yuan Zhang, who became popular by appearing in the TV shows ‘Non-Summit’ and ‘Where Is My Friend's Home.’ He was invited by Professor Xiaoru Qu (School of International and Area Studies) to participate in the event as a special host. He expressed his views as, “I hope that this event becomes an opportunity for the Korean and Chinese students to understand each other better and become much closer.” Whenever Zhang appeared on stage as a host, the explosive cheering and screaming of about 300 spectators livened up the stage. 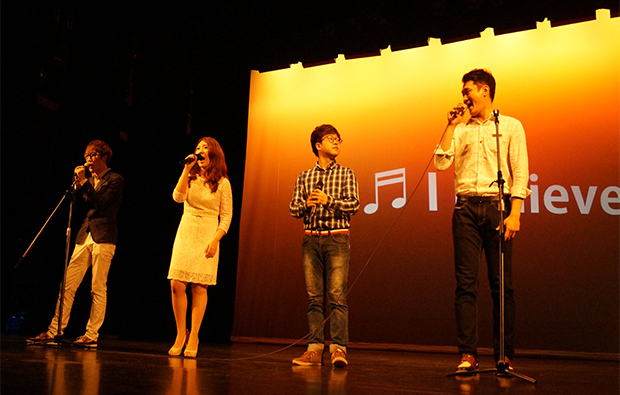 ▲ The opening performance of ‘I Believe’ began the intense event.

The joint performance of the Korean and Chinese students (‘I Believe’) was the opening program at the 2015 Korea-China Cultural Exchange. Three Korean students and one Chinese student performed in the opening number. They were able to make the event’s atmosphere relaxing and comfortable with their rendition of the English song ‘I Believe.’ The beautiful harmony made by the Korean and Chinese students with their united minds and hearts fully delivered a sincere message to tear down the wall of misunderstanding and prejudice among the students, as likewise declared in the lyrics of the song ‘I Believe.’ 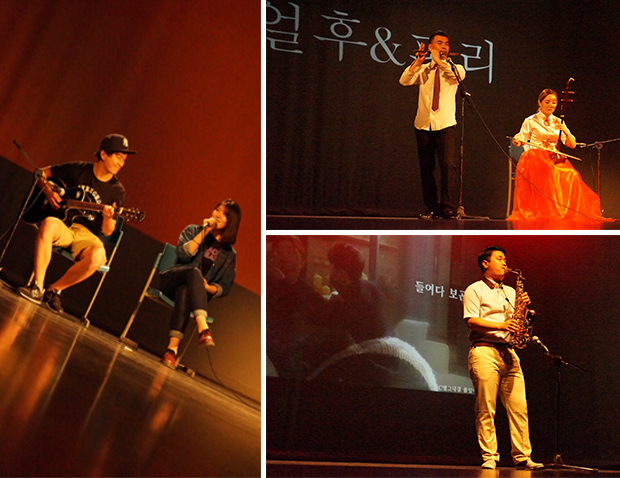 Following the opening number, the Chinese mixed duo ‘Jun Yang’ and ‘Dong Ning Lee’ also delivered a fantastic performance. Moreover, the melody of Chinese traditional musical instruments Erhu and pipe surrounded the Grand Theater of the College of Arts building. The beautiful tone of Erhu, probably from the story of the Romance of the Three Kingdoms, aroused the Korean students’ interest in the traditional Chinese culture. At the same time, the outstanding talents of the Chinese exchange students were witnessed by everyone in the audience. The next performance was saxophone playing by Chinese student ‘미개.’ The melody that he chose was ‘My Destiny,’ the theme song of a Korean drama called ‘My Love from the Star’ which was also loved in China. The romantic sound of saxophone, together with the reenactment of the drama scenes, fascinated the eyes and ears of the audiences. 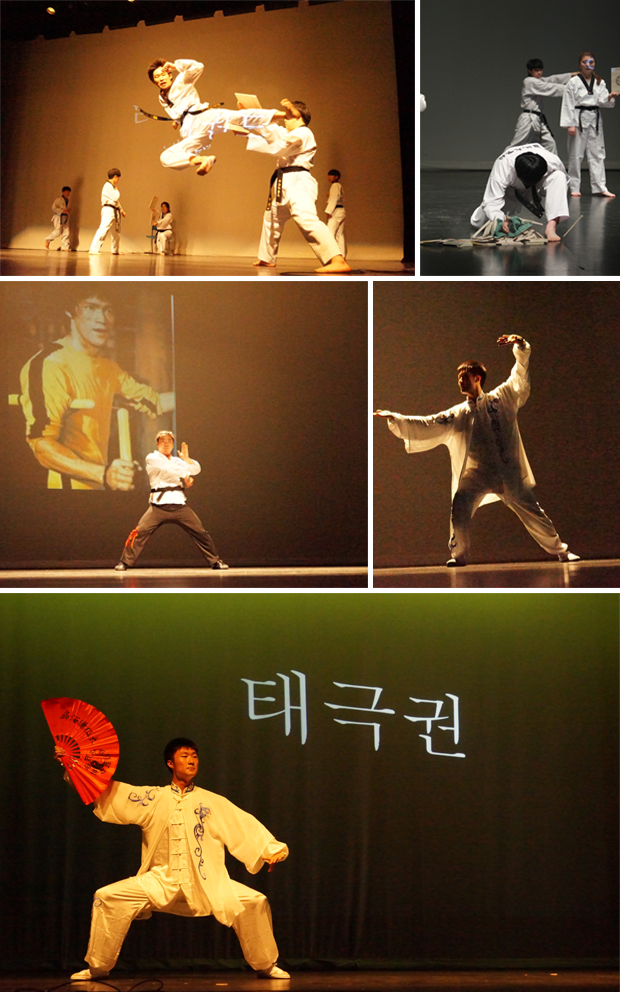 ▲ Demonstration of Taekwondo by the Korean students,
and nunchucks and Tai Chi demonstration by the Chinese students

After the fascinating musical and drama performances, martial arts demonstration of the Korean and Chinese students followed. The Korean traditional martial arts Taekwondo was demonstrated by the students of Chinese Studies of the School of International and Area Studies and by ‘Tae Rang,’ Kookmin University’s Taekwondo club. Whenever fancy kicks and splendid fine board smashing occurred, the hall became filled with cheers and excitement. Afterwards, the Chinese students presented their ‘Nunchaku’ and ‘Tai Chi’ demonstrations. The restrained performance of the Nunchakus was marvelous enough to evoke the audiences’ admiration. Particularly, the ‘Tai Chi’ and fan dance of Chinese student representative ‘MinBin Wu’ was very graceful and reminiscent of scenes in Chinese action movies. 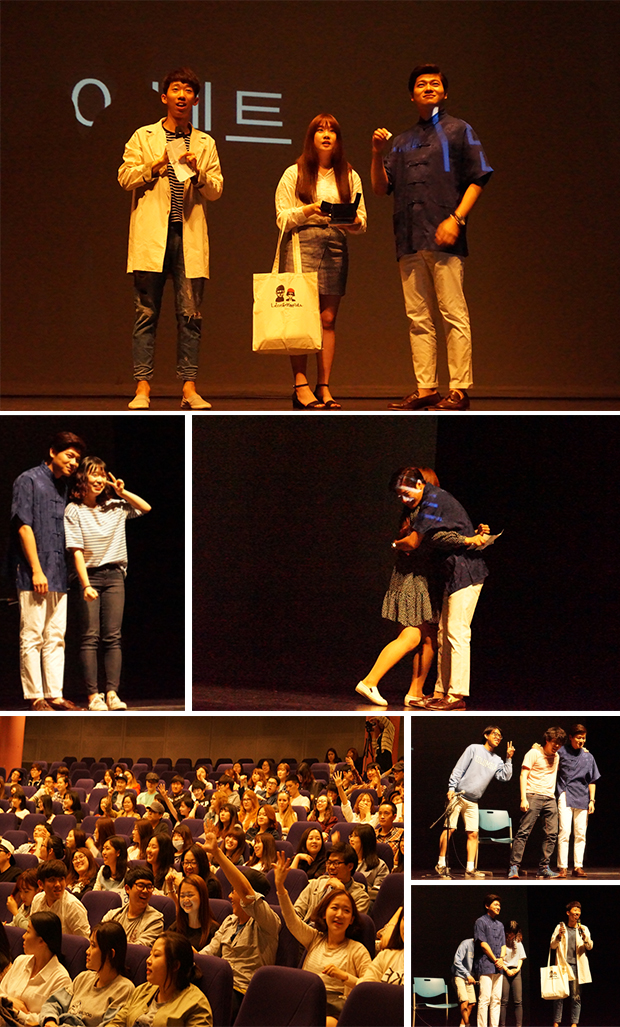 ▲ Surprising events that were promoted by Yuan Zhang in-between events

Aside from the beautiful melodies and splendid performances on stage, the most anticipated portion in the event was the appearance of Yuan Zhang! There was a giveaway segment where a prize was drawn from the pamphlets handed out to the audience at the entrance. Various gifts were given away, ranging from small items to expensive alcoholic beverages. Among many gifts, the most popular gift item among female students was the autograph directly signed by Yuan Zhang and taking photos with him. Some female students even received a hug from Zhang, which they considered as a very special gift from him. With witty event composition and a sensational host, the intense atmosphere of the event lasted for over three hours. 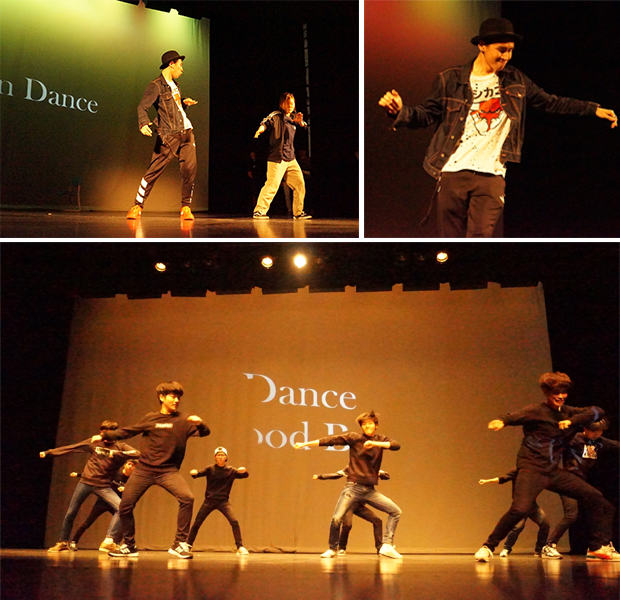 The intensity of the event reached fever pitch as it drew to a close and dance numbers energized the crowd. The Chinese students performed an elaborate poppin dance. The ‘Good Boy’ dance group, consisting of freshmen from the School of International and Area Studies (who won the grand prize at the Haeoreum Fair hosted by the College of Social Sciences also performed on stage. These two acts notably aroused the excitement of the audiences. Particularly, the ‘Good Boy’ dance group electrified the audience with their amazing performance and their god looks made the countless female students’ hearts pound. 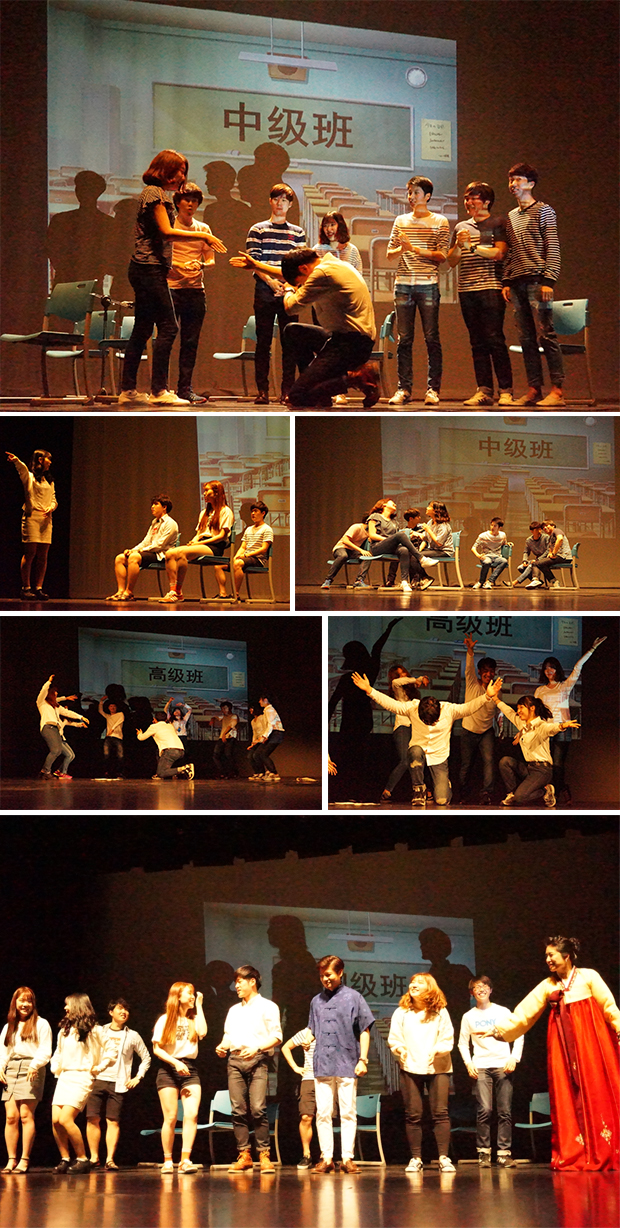 Following the elaborate performance, a Chinese play ‘Our Chinese Skill is Getting Better’ was performed by the Chinese students. The play was composed of three classes: beginners, intermediate, and advanced levels. The performers were real students of Chinese Studies from the School of International and Area Studies. Although the actors and actresses were only beginners and just started learning about Chinese language for two months, they delivered a credible performance through hard work and lots of practice. The students asked and answered questions in Chinese and they showed their Chinese language skills, ranging from easy concept of numbers to difficult expressions. They also danced along with a popular Chinese children’s song. All Chinese students applauded and cheered while watching the play and they also enjoyed participating in the play. It was the significant moment that truly reflected the purpose of the 2015 Korea-China Cultural Exchange.

After the Chinese play performance by the Korean students, all Korean Chinese students who participated in the event sang a Chinese song together called ‘Friend.’ The students became true friends just like in the lyrics of the song; the different nationalities (Korean and Chinese) were transcended by discovering the hidden talents and intellect. The 2015 Korea-China Cultural Exchange festival culminated with the meaningful song ‘Friend’ sang by all participants. 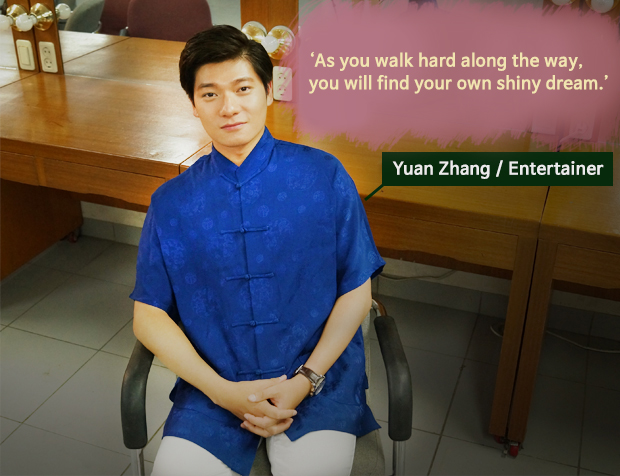 Q. You were the special host of the 2015 Korea-China Cultural Exchange at Kookmin University. Is there any special reason why you accepted this hosting task? Also, please tell us how you felt about hosting the event.
The main reason why I agreed to host this event today is because of my close ties with Professor Xiaoru Qu of Kookmin University. As Professor Xiaoru Qu said in my introduction, I started my career in broadcasting. It has been three years since I have met her. She helped me so much in many ways. I owe my current success to Professor Xiaoru Qu. So when she asked me to host the event today, I was very willing to participate in the event. Not long ago, I had a special HSK lecture in her course at Kookmin University. I often met students from Kookmin University when teaching Chinese in a Chinese academy. I came here mainly because of my special relationship with the professor, but I also take this as an opportunity to meet and communicate with students. These are the reasons why I agreed to be the host in today’s event. 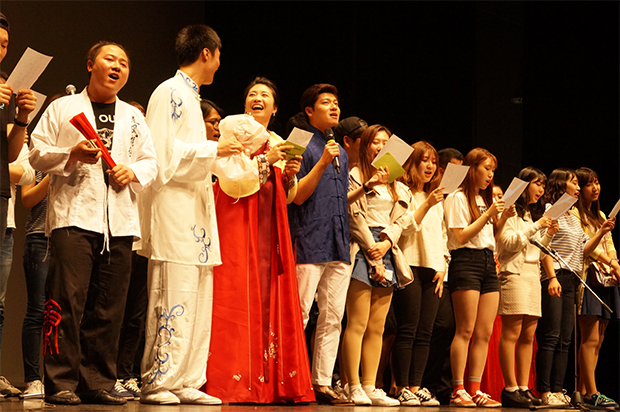 ▲ The Korean and Chinese students sang together.
It was the grand finale of the evening's entertainment program.

Q. Is there any message that you’d like to share with Kookmin*People?
I heard that many students today are concerned about their future as they do not know ‘how to realize’ their dreams. When I heard about this, I contemplated on this matter over and over in my mind. I think that students can search for their dreams while studying hard as it is their duty. I also found my own way of living my life while doing what I could do best at the moment. I was able to realize my dreams when I was 30 years old and now I live the splendid life that I had dreamt of. If you have a special dream, work towards it and even if the path is not clear, do the best that you can at the moment. Once you start to exert efforts, you will eventually find your own path and direction. I want you to be empowered for your dreams. Keep on fighting!

We often face situations that cause unintended misunderstanding and prejudice as we are too close to each other. Although we are close enough, we cannot truly see others without making an effort to understand each other. China is a country that has deep influence in our lives and there are many people from China in Korea. WE build relationship with them not based on nationality but as companions living in the same era. When we see and understand each other with open minds and expansive point of view, Koreans and Chinese will become true ‘friends’ to each other.

Andante: The aesthetics of slowness, exhibition of the juniors from the Department of Metalwor…