The field sketch of the 2015 entrance ceremony 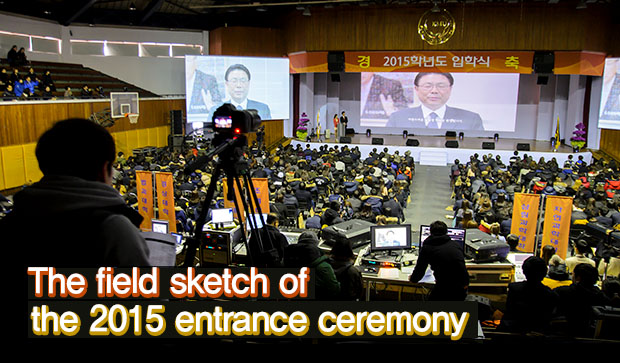 Last February 27th, the entrance ceremony for 2015 was held in the gymnasium of the College of Economics and Business Building of Kookmin University. The scenario: piercing wind, withered trees as if being naked, thick coats covering up the folks, and flushed faces. The five senses of those entering the campus were numbed with coldness. However, such coldness didn’t last long. The seniors welcomed the newcomers with smiles, hot heater packs were given by welcoming hands, and busy people walking around the campus brought warmth to the place. Like how the season changes from winter to spring, the 2015 entrance ceremony ushered a new beginning under a new environment. Here is the sketch of the site:

▲ The welcoming banners for freshmen were all over the campus. 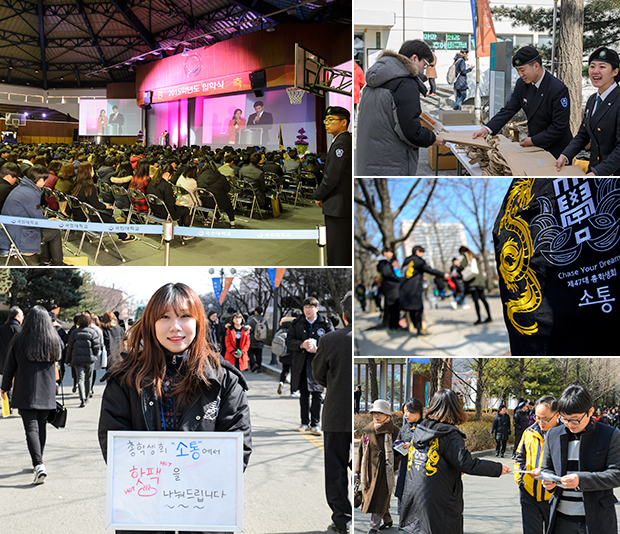 # The seniors who welcomed the freshmen
Aside from the banners that welcomed the freshmen of Kookmin University, ROTC cadets were positioned all over campus to guide the freshmen and their parents who were not yet familiar with the campus facilities. In addition, the 47th Student Council ”Communication” handed out hot heater packs that can be used inside the little cold gym. They even filled the pockets with additional heater packs although people already held them in both hands. 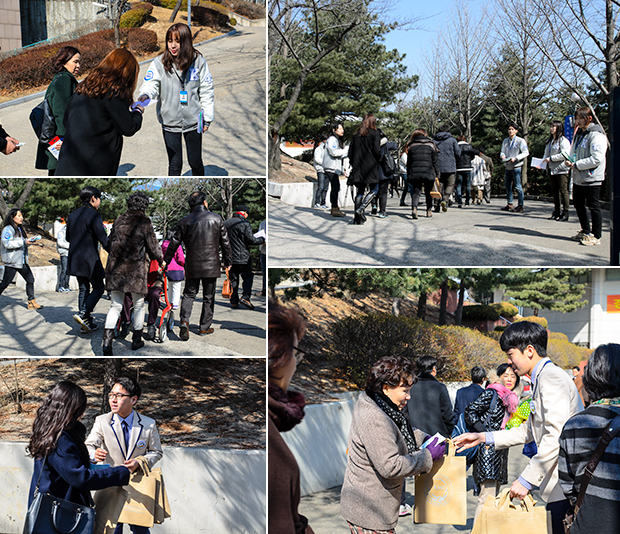 The entrance ceremony was held in front of the gym. The broadcasting station of Kookmin University (BBS) and University PR Ambassador Gukhui, with smiles on their faces, greeted the freshmen and their parents and also provided them with event information. As representatives of the university, the ROTC cadets, members of the Student Council, Press, and PR ambassador showed their staunch looks to the freshmen. 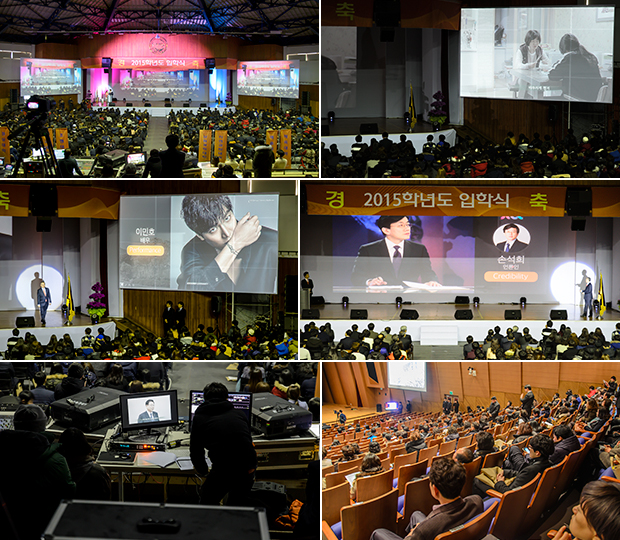 ▲  Part I of the entrance ceremony included the students’ visual contents,
presentation of President Ji-soo Yu, introduction of alumni, and welcoming video of the graduates.

# Part I of the entrance ceremony
The actual entrance ceremony was held in the gym at about 2 PM. This was shown in real time at the Concert Hall of the College of Economics and Business Building. The opening speech began with the anchor Min-hui Hong and In-seong Hwang, followed by the Pledge of Allegiance and Oath of New Students. Also, a video was shown that elevated the sympathy for the students and their parents who exerted great efforts in order to enter Kookmin University. After the video, the students were allowed to say “Thank you and we love you” to their parents. However, the freshmen looked somewhat embarrassed after they expressed their appreciation for their parents.

President Ji-soo Yu’s presentation of his Welcome Remarks and Vision generated questions for the students like, ”Why did you come to Kookmin University” and ”What kind of person do you want to be at Kookmin University?” After this, prominent graduates of Kookmin University who actively work in various fields were introduced: Min-ho Lee (actor), In-sik Bae (Chair of Gretech Council), and Kwan-ho Park (President of Wemade Entertainment). Based on the profiles of these successful alumni, the ideal courses that may be pursued in Kookmin University were explained. The alumni who were not able to attend the entrance ceremony because of their busy schedules were Suk-hee Son (journalist), Eun-jin Pang (film director), and Maeng-wu Park (assemblyman). They welcomed the new students with their recorded videos. Lastly, the university song was sung to close Part I of the ceremony. 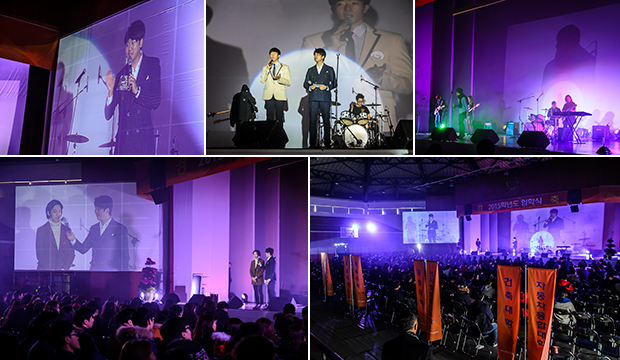 ▲ The welcome assembly in Part II proceeded with the introduction of school representatives
and the performance of Jungang Club.

# The welcome gathering in Part II (gymnasium)
Part II was divided into two segments: the “welcome assembly” for new students who are anticipating their new life in campus which includes participating in the student council and club activities; and “communication with parents” for the parents who were wondering about the roles of the university in relation to their children’s future. The “welcome gathering” started with a simple quiz about the university, as handled by the witty event host. Afterwards, the welcome greetings of the University Council President and University PR Ambassador “Gukhui” were presented. Finally, the performances of the Jungang Club “Auseong” and Busta enlivened the crowd. 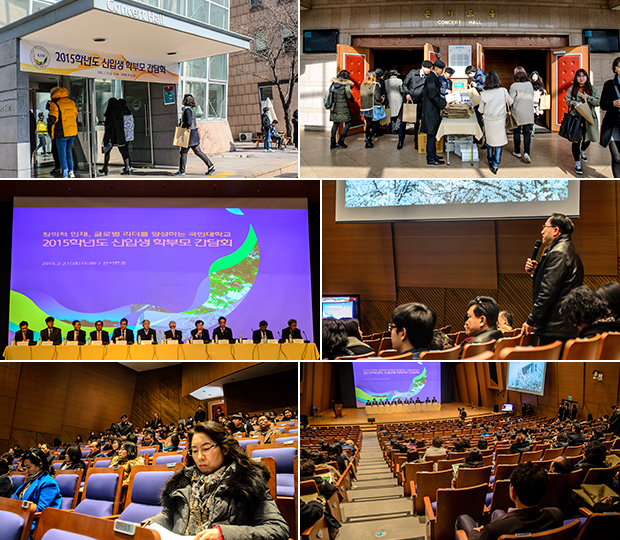 ▲ “Communication with parents in Part II” was held at the Concert Hall
of College of Economics and Business Building.

# Communication with parents in Part II (Concert Hall of College of Economics and Business Building)
In the “Communication with parents” segment, President Ji-soo Yu, deans of academic affairs, and the parents shared and discussed various issues on academic vision and employment. President Ji-soo Yu said, “We are concerned about the employment issue as many students and parents are interested about it. We emphasize requirements that are demanded in businesses. Moreover, when given the chance, we discuss with human resource managers the qualities that students should possess. Detailed issues about job competence and desirable personality are also addressed.” The parents in turn asked questions about the departments that their children have been admitted to. They asked about the vision of the Department of Automotive Engineering and the graduates of KIS (KMU International School). President Ji-soo Yu and deans of academic affairs earnestly answered their questions. 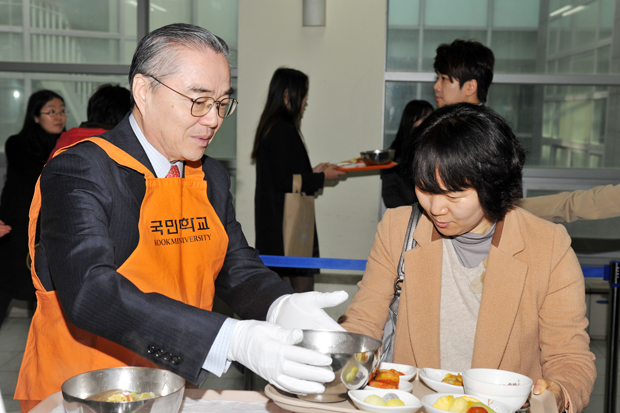 ▲ “Noodle soup shared with parents in Part III” was an opportunity to share special moments
among the parents, freshmen, and faculty.

# Noodle soup shared with parents in Part III
In Part III, President Ji-soo Yu and deans of academic affairs personally distributed meals to the new students and their parents. The parents gathered together to share their impressions on the entrance ceremony and college life. A student named Jun-cheol Ma (Class of 2015, Civil and Environmental Engineering from the College of Engineering) said, “It was very impressive to know much about the President, the activities of the graduates, and the plans and vision of the university. The performance of the seniors in Part II was also fun.” Many new students expressed their expectations on their future university lives.

A parent named Jeong-eun Yu (parent of a student majoring in Automotive and IT Convergence from the College of Automotive Engineering) said, “It feels great for parents to be given a chance to directly communicate with the university officials and faculty members. It will be nice if regular communication with the university will be implemented.” The parent also expressed gratitude for the university’s program of events. She added, “I expect the university to build sound infrastructure that will allow the students to learn other majors and gain knowledge, and to develop and refine their skills.

Unlike the entrance ceremony of elementary, middle, and high school that requires the student’s presence, the university entrance ceremony attendance is a personal choice. It is to stand at the crossroads and making the first choice. There is no failure in any choice made, but the value of each one’s choice can be compared. What can be compared to the appreciation that new students feel about their parents and the seniors present in the entrance ceremony? I hope that the new students can act as grownups that are able to enjoy their freedom with broader opportunities, enhanced personalities, and better dreams throughout their university lives.

The construction world of Swoo-geun Kim: The space that reflects humanism