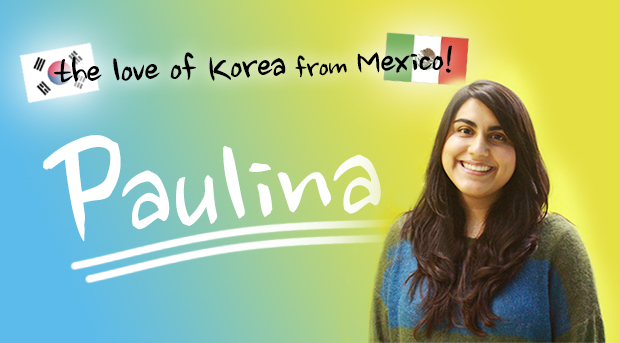 There is an expression of ‘Korea Fever.’ Why is the word fever added to Korea? In English-speaking countries, ‘~ fever’ is often used for those who are fascinated with and excited about something. As such, people often get very excited about something that one really likes, experiencing a burning sensation similar to that of having a fever. For those who really like Korea, they are into such ‘Korea fever’ as their heart feels burning just by thinking about Korea. In this [Another Kookmin*People], a female foreign student who goes with the expression ‘Korea fever’ the most is introduced. This exchange student is Paulina Gomez Martinez from Mexico. She has been into the ‘Korean fever’ for 10 years and thinks to keep having that fever from this point onwards. Starting from K-POP, she spent her teenage period with Korean dramas, movies, and food. She suggested Korean culture to people around her and finally flew to Korea to spend the winter semester in 2014. Let’s listen to the story of Paulina who loves Korea very much.

Q. Briefly introduce yourself and where you are from. 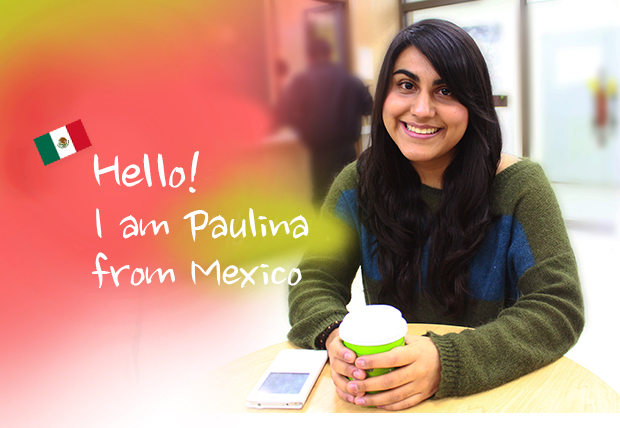 Hello. I am Paulina from Mexico City in Mexico. I am 24 in Korean age and senior in the university. My family includes a father, a mother, and a dog named Luna. I am the only daughter but I was not lonely because I had been surrounded with cousins.

My major in Kookmin University is industrial design. More accurately, it is transportation design. First, i went to a university in Mexico to major in marketing. But as i studied more, i knew it was not the field that I wanted. I later changed my major to transportation design as i loved painting and designing. I applied to the exchange program for industrial design. I am very happy with my major.

Mexico is located in North America. It is close to the border of the U.S. The climate is similar to that of Korea. In general, it is warm and not cold like Korea during winter. I first saw snow after coming to Korea. In Mexico, not many people go to a university as Koreans do. We are not enthusiastic about education. In Korea, more than 80% of high school graduates go to colleges but in Mexico, about only 5 out of 100 students from my elementary school went to college. Since I went to an international school when I was young, I was able to enter the university. That’s why I speak decent English.

Q. I wonder how you became interested in Korea.

Korean fever is very popular in Mexico. Idol singers like ‘Bigbang,’ Girls’ Generation,’ and ‘2NE1’ are popular. Not everybody knows other Korean singers except for a singer like ‘Psy’ but there are one or two students in each class who are fascinated towards the refined Korean culture that is different from Japanese culture. Since there are many half-Spanish in Mexico, we don’t have many chances to see Asians. So we have a fantasy in Asians. For Mexicans, Asians, especially idol-looking Korean men are thought to be cute. I think the same way. Actually, Korean men are cute and they are different from Chinese and Japanese men. They are sophisticated and kind. 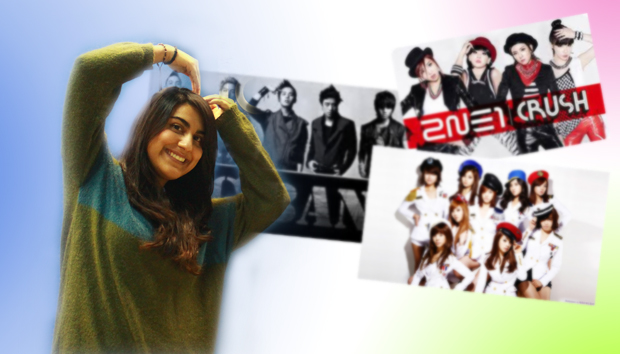 My love for Korea started with K-pop. When I first listened to Korean music, I felt the uniqueness and difference from the songs that I often listened to in Mexico. I truly enjoyed the songs of ‘Bigbang’ and ‘2NE1’ when I first listened to them. As I liked K-pop, I became interested in Korean singers and started to like Korean entertainment programs. I then grew fond of Korean dramas as well as actors and actresses. I wondered about the taste of food shown in the Korean dramas so I tried them myself by getting ingredients from the Korean market in Mexico. I sometimes went to Korean restaurants. I learned the Korean language being used in the Korean restaurant. I really liked everything about Korea and I am happier as I am now in Korea.

Q. What made you fell for Korea?
Everything. I like everything about Korea including Korean idols, Korean language, Korean history, Korean food, and unique affection. Especially, Korean idols are really cool and their songs are different from that of other countries. Singers perform really well. I went to many concerts and they sang really well.

I like the Korean language so I study hard. I think it is very scientific and sophisticated language. The more I learn, the more I enjoy. The pronunciation is cool, too. Mexico became independent on September 16, 1810 after being colonized by Spain in 1521. Due to the effect of the colonization, we still use Spanish but in Korea, it is amazing to have unique language and characters made by King Sejong. While staying in Korea, I went to the Digital Hangeul Museum located in Gwanghwamun. I am proud of the efforts made by the people who tried to maintain the unique culture and language of Korea while being occupied by Japanese.

To speak of the reason that I first like Korea, I think about religion. Christianity or Catholic is dominant in Mexico owing to the colonization effect and the disappearance of folk religions. My family is Catholic but Koreans are very open to religion. I heard that Korea is open not only to folk religions but also to Christianity, Catholic, Buddhism, and Islam. It is quite amazing.

Mexicans also enjoy spicy food. We have ‘Taco’ that is enjoyed with spicy sauce, pickle, vegetable wrapped with flour dough. There are similar foods in Korea like Kimchi pancake or green onion pancake. The Korean pancake is really delicious. I tried having Kimchi, seafood, pepper, and vegetables with flour and I cannot forget about its taste as I bite into it. So I often go to a restaurant to have the Korean pancake with foreign exchange students. Also, I love Maggolli! There must be an alcoholic beverage for the Korean pancake. Lately, I went to Insa-dong and drank plum Dongdongju (rice wine) and it was tastier than Maggolli. I did not drink before but I started to enjoy drinking. The Korean food culture is good for me. I hate to leave Korea because of its food.

It was possible to feel her great affection to Korea as she had continued the love from Mexico. I asked Paulina about the reason why she particularly chose Kookmin University.

I think it was an excellent choice as Mt. Bukhan is so beautiful. Of course, the lectures are good. I can reach many good places like Gwanghwamun, Samcheong-dong, Insa-dong, Jonggak, and Jongno within 30 minutes.

Q. What kind of activities have you done while staying in Kookmin University?
Ha, ha. I have been very busy while studying in Kookmin University because of assignments. We had really a lot of assignments. I spent nights without sleep because of design assignments. It had a tough time since I was not able to have enough sleep. Except for hanging out with friends after exams or drinking occasions, I couldn’t participate in many activities. I just stayed in Seoul. Instead, I visited many places in Seoul with my friends through the Global Buddy program. I visited Gyeongbokgung Palace and enjoyed tasty Korean dishes in Insa-dong. During the weekend, I went to the National Museum of Modern and Contemporary Art and experience Hanbok (Korean traditional costume) at Namsan. Whenever I did not have an assignment, I really had fun. 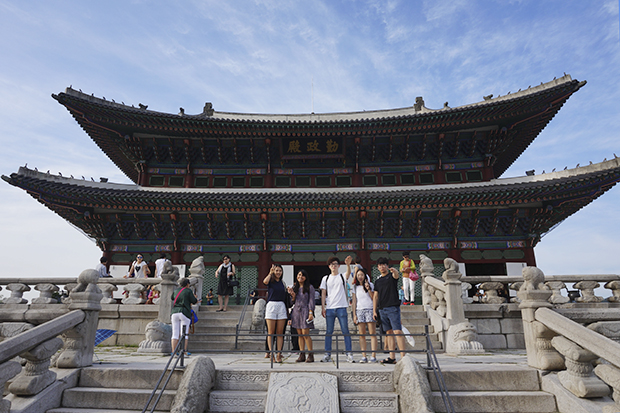 Although I did not participate in outdoor activities, I felt many wonderful things from the passionate students of the Department of Industrial Design. Kookmin University has created a good academic atmosphere. It is one of excellent things to be emulated. There are many people with distinguished competence. I looked back at myself and decided to exert more efforts. 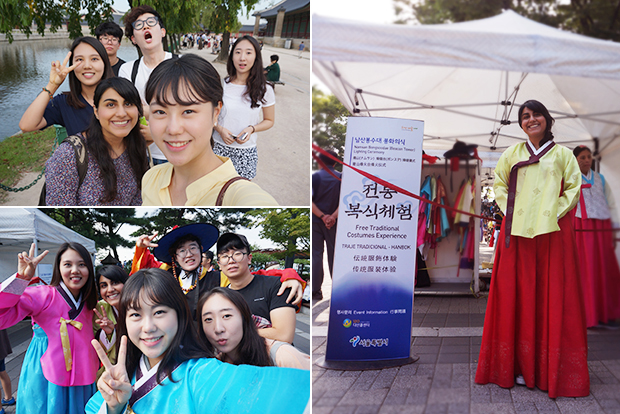 Recently, I designed a table for a dog. It was an individual task to design a table where a dog can comfortably eat its food. Do you think it is good for a dog?

Q. What is the most memorable event in Kookmin University?

There are so many things like going out with friends at night, having favorable review for the team project, and having a chat in a nice café near the university. There are so many great moments but going to Han River for the team project was most memorable. It was to design a bicycle and our team members rode a bicycle along the Han River. We enjoyed fried chicken and beer. Thanks to the assignment, we were able to spend quality time.

Lectures in Kookmin University inspired Paulina to study harder. After the long interview, I asked a couple of simple yet meaningful questions.

Q. Have you changed your mind before and after coming to Kookmin University in Korea?
Before coming here, many people around me said ‘I might be discriminated as Korea is an Asian country and there are not many foreigners.’ But it was not true. People are nice to foreigners. Whenever I asked where to go and about lectures in the university, the students are very kind to explain them to me. As they did not know where I was from, they thought I was from Turkey or Oceania due to the color of my skin. I appreciate people asking many things about Mexico after they learned I was from there. When I look back, I am simply thankful for everything. 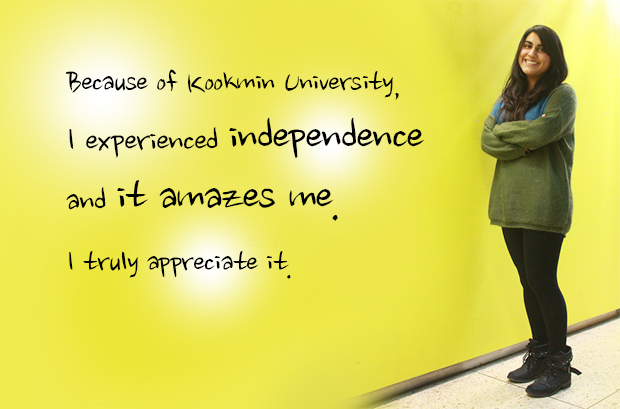 I have been really happy while staying in Kookmin University and I appreciate everything. I liked my friends in the department so much that I bought a varsity jacket for my major of Kookmin University. I will wear it in Mexico. I won’t forget about the last semester after going back to Mexico. I made so many unforgettable memories in Korea and Kookmin University. I made many Korean friends and I don’t want to leave. Of course, I miss my family but a great part of me doesn’t want to leave Korea. I am going to miss this country. I almost cry whenever I think of leaving Korea. But I will diligently study the Korean language and be back to Kookmin University to study design work. I will be back so please wait for me until that time comes.

While having the interview, Paulina showed her overflowing affection for Korea. She loves the commonly underestimated things of Korea and is proud of the unfamiliar Korean history. Such look impresses us. Until she comes back to Korea, I hope ‘another Kookmin*People’ will study, love, and be proud of Korea. Like Kookmin University presented good memories to her, I also had good memory because of Paulina. As I pledge to build more memories with Kookmin*People from this point onwards, I wrap up the last interview for 2014.

KPA, the genuine Korean beer that was brewed with the dreams and passion of two young men, hit…

The meeting of Russia, China, and Japan, “UNISON,” the cultural event of the School of Interna…