The meeting of Russia, China, and Japan, “UNISON,” the cultural event of the School of International & Area Studies 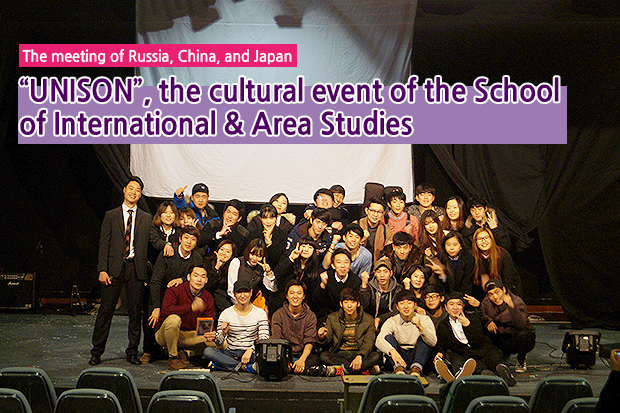 The student-led cultural event has opened on Thursday, November 27th again after 6 years of hiatus. This is the ‘UNISON,’ the cultural event of the School of International & Area Studies. Focusing on Byeong-jun Jeon who took charge of event planning, the students from the Department of Russian, Chinese, and Japanese got together to present unique event to Kookmin*People. They prepared food from their countries, experience-based tea event, stage for performance, interesting show, and event with outside guest performers. How was the event that was created with passion? Let’s take a look at the unique culture of this event. 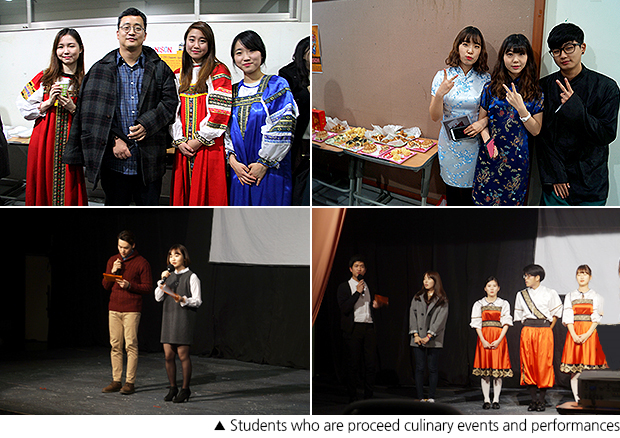 It was an event that was autonomously promoted by the students from the School of International & Area Studies with the intention to introduce the unfamiliar culture of various countries. Actually until 2009, it had been an annual event that was internally held among the School of International & Area Studies but it was temporarily stopped after that. After several years ofhiatus, this event was reopened this year as if spreading the wings of its resurrection. Along with the food and tea experience of each country, the main event involved the experience of dynamic culture of countries through symbolic performances. Then, how was the first half of the event progressed? 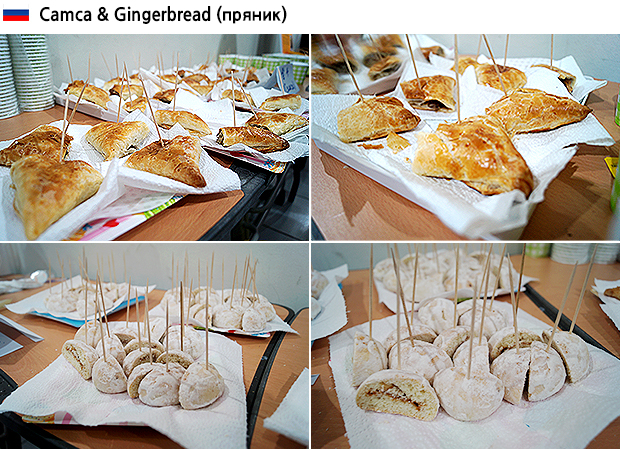 Camca was the traditional food of Russia and Uzbekistan and it was the most popular dish in the event. It is sort of a croquette that was baked in the oven after stuffing meat in the pastry. To make such dish, flour dough is rolled thin and lamb filling is stuffed into it. After shaping it in a triangle, it is coated with egg and sprinkled with sesame. This is then baked in a 200-degree oven for about 20 minutes. The gingerbread (пряник) is a representative Russian molasses cookie and is characterized by its sweet taste. Honey is originally used for it but depending on preference, lemon jam, condensed milk, chocolate, and cinnamon can be added. Also because of its special sweetness, it is often enjoyed with tea.

Mooncake is a Chinese bakery product that has been succeeded from South Song Dynasty and on the 15th day of the 8th lunar month, it is made to symbolize the round shape of the moon. It was offered to the moon with round fruits like chestnuts, watermelons, pears, and persimmons and by sharing it with close neighbors, people wish happiness to each other. For the ingredients, there are flour, lard, sugar, starch syrup, eggs, red bean paste, and dried fruit, and a round wooden mold is used. Saqima is pastry that is made by deep-frying thin noodles and covering it with starch syrup. With its chewy, sweet, and nutty taste, this is a very popular snack in China. Many people who tasted a bit of Saqima agreed on the unique sweetness of the Chinese sweets.

The cookies, wasabi beans, and ramen snacks that represented Japan attracted the passing students. These snacks made people addicted to the salty and nutty taste. The most popular snack here was ‘Wasabi Mame,’ the wasabi beans. Some pinch their nose because of the spicy taste whereas some asked for one more cup, suggesting that they liked the taste. The unique taste that clearly showed likes and dislikes was the reason why this snack is the most popular snack in the event.

The performance that represented Russia began with the classical song performed by Seung-jae Gang in the Department of Vocal Music (class of 2008). He sang ‘Cranes’ and ‘Don Juan’s Serenade.’ ‘Cranes’ is a well-known OST of ‘Hourglass’ and it was written by Rasul Gamzatovich from the mountainous area of Chechen after coming back from the battlefield of World War II. He wrote a poem as he compared ‘cranes’ to his fellow soldiers who could not come back after their death at the hell-like battlefield. This poem was then sung along with the folk Caucasia melody. After singing this song, the difference between the classical Russian songs and Korean popular songs was explained. 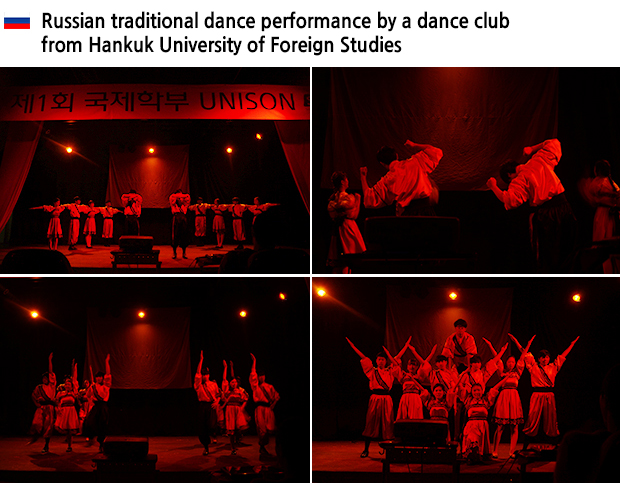 As for the second performance of Russia, the Russian traditional dance was presented by a dance club from Hankuk University of Foreign Studies. The dancers moved under the red light as if being measured with a ruler and presented the traditional Russian dance to the audience along with the grand music. For 10 minutes, members of the audience were attracted to the dancers and they followed the dancers’ movements. Also, the advanced dance technique like tumbling amazed the audiences.

For the performance of the Chinese team, a Chinese exchange student Byeok-gun Yang and Seung-wu Yi from the Department of Chinese (class of 2014) sang passionately. First, the pretty looking Byeok-gun Yang sang a Chinese popular song called ‘Zai Shui Yi Fang’ sang by Teresa Teng who sang ‘Comrades (Almost a Love Story)’ playing a guitar. This song meaning ‘I am at the riverside’ aroused deep emotion despite its beautiful and relaxing feel. After the performance, her impression shared in decent Korean also surprised the audience.

For the second performance, Seung-wu Yi from the Department of Chinese (class of 2014) showed his singing prowess by singing ‘Chuntian Li.’ Chuntian Li means ‘one spring day’ and it portrayed the longing of the beautiful days in the past shared with the loved one. With his unique voice using nasal tone, he delivered mellow sentiment while creating a mood where the audience can reminisce. These performances effectively showed the signature atmosphere expressed in Chinese music, which was affectionate sentiment. 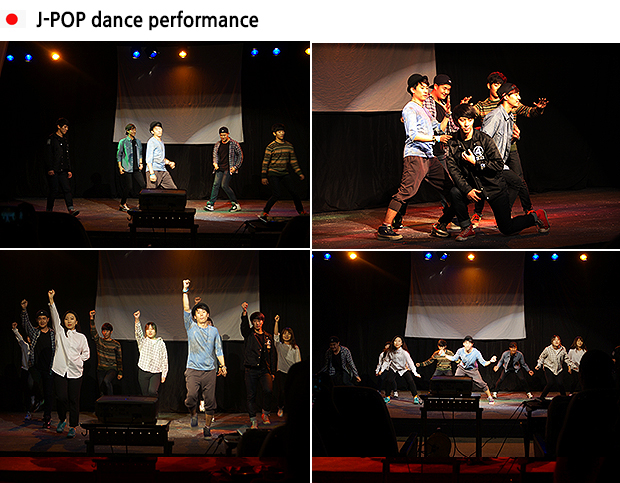 As for the performance of the Japanese team, the students from the Department of Japanese in the School of International & Area Studies presented cheerful dance along with the performance of a band club called Magenta. As if proving their efforts made for this event, the students of the first dance performance showed what they could do. The songs of the popular Japanese idol group Arashi and SMAP and Girls’ Generation’s Gee dance entertained the audience. 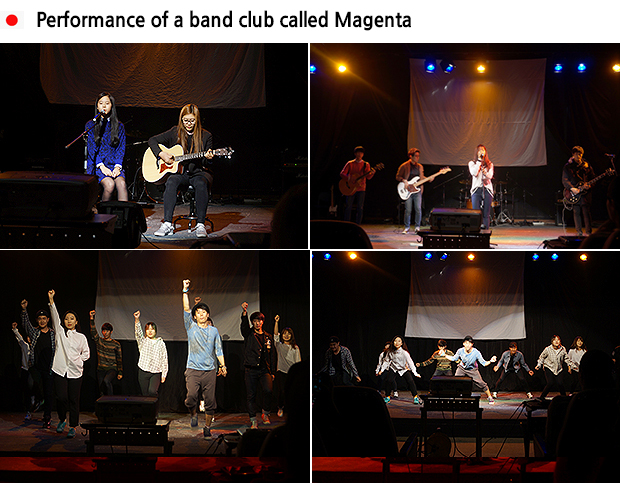 For the second act, the performance of a band club called Magenta was on stage to celebrate the event. According to the purpose of ‘UNISON,’ Magenta prepared Japanese popular song and J-ROCK and especially, ‘Ukino Hana’ that was a great hit originally sang by Nakashima Mika in Japan and Hyo-shin Park in Korea delivered the Japanese sentiment of winter. Lastly, the grand sound of the band music went out on a high note. 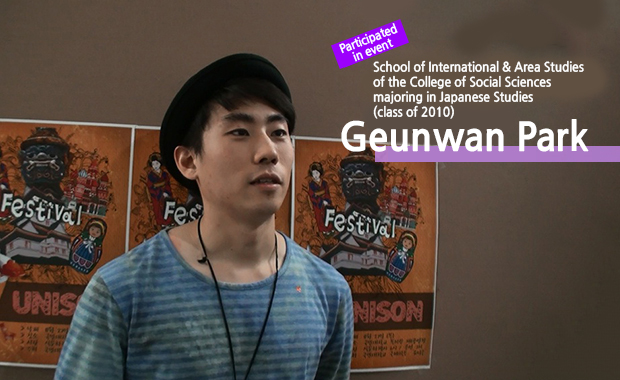 Q. How did you get involved the event?
I was suggested to participated in the event and while preparing the event, I wanted to make good memories with my juniors. For the preparation, members got together on weekends and spare time and they practiced while watching video. By preparing to the best of one’s ability, it was possible to successfully complete the event.

Q. What is your significance of this event?
Since it is a cultural exchange event, the significance of this event is to be able to indirectly experience the culture of the three countries. I obtained knowledge about other countries while preparing the event. Also, I am very happy to have such good performance with the seniors and juniors. I think it is possible only when I am in the university. From that point, it seems more meaningful to all students who prepared the event together. 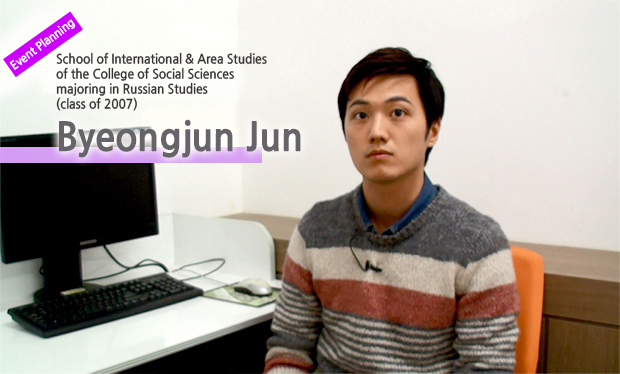 Q. What is the reason for the planning this event?
First of all, I was very sorry for discontinuing the tradition of the School of International & Area Studies. Various cultural events of each department that had continued until 2008 disappeared from 2009. Actually, there is nothing like a performance that can strengthen unity and camaraderie. Also, there is no better opportunity for us to learn about the experiences and know-how of our seniors. Due to the characteristics of the School of International & Area Studies that is divided into three departments and has a large number of students, I thought it was necessary to have a tradition where all students got together. Also, I wanted to provide an environment for my juniors to experience and participate more in the university while letting them know on how to work before moving forward to the real society.

Q. What do you want to talk about this event to Kookmin people?
Actually, the students of Kookmin University have more entertainment talent compared to those in other universities. We are just here to fit with the academic atmosphere. At least, I wanted to make an opportunity for my friends in the School of International & Area Studies to show off and explore their talents. Through ‘UNISON,’ I hope that not only the students of the School of International & Area Studies but also the other students of Kookmin University can experience dynamic foreign culture and showcase their hidden talent. As our friends majoring in classical music and Magenta shared with us, it is possible for anyone to be with us through Unison, the frame of Russian, Chinese, and Japanese culture. Besides dancing, singing, and other performances, the students managed everything including the planning, operation, stage design, sound, lighting, and poster production. There is nothing that we cannot do. I hope that others will open themselves to challenge and experience. Such chance of challenge and experience will be provided through UNISON.

The passion witnessed near the students was different. Such passion enabled autonomous planning, realization of high quality performance, and opportunity of harmonization. What is the most important element to do something? Of course, capability is important and the same can be said about capital and timing. From such perspective, there are so many things we have to consider. However, the most important thing here is the will to do something. This is what we call as passion, the will to do things. When we listen to the voice of our mind and measure the size of the voice, we tend to stay at the moment for the right timing. Let’s think about it. Can we really measure passion in terms of size? Is there really a right timing for a challenge? Look at them. If you want to do something, now is the time.

Hyeong-gyeong Lee, a young businessman who draws the attention of the 3D printing industry