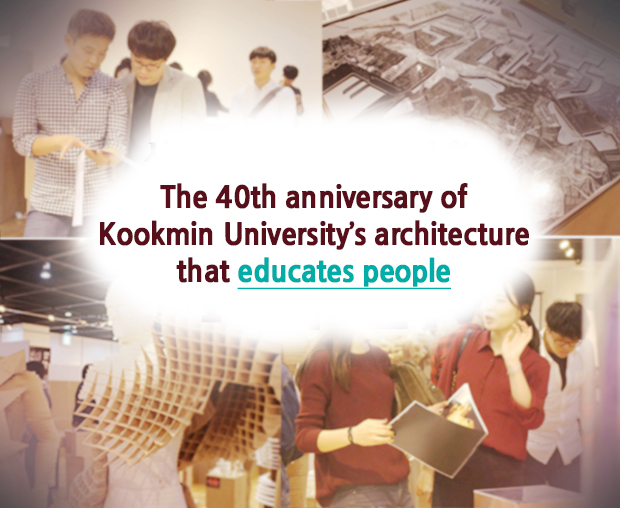 ＊ Triennale: It indicates a festival held every three years (Biennale is for every two years).

The exhibition venue was B1, of HDC in Dongsung-dong, Jongno-gu (Dongsung-dong, Jongno-gu, Seoul, Korea) near Kookmin University. Even 30 minutes before the opening ceremony, students and graduates filled the exhibition hall. The venue was overcrowded with professors from the School of Architecture and Fine Arts as well as students from other universities. They attended to celebrate the 40th anniversary of the Kookmin University’s architecture. 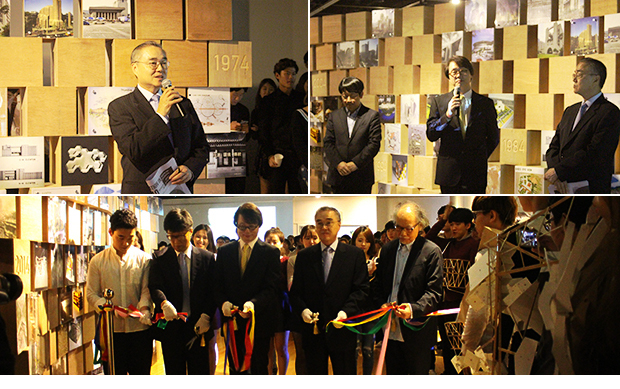 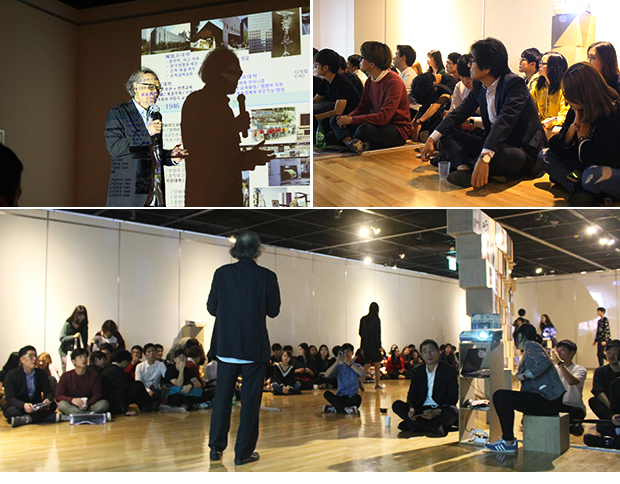 “The history architecture education in Korea has been almost 100 years since its start in 1916 passing the Japanese colonial era. Amidst the chaos, ideology clash, and period of the U.S. military government, university education began in 1940 ~ 1960 and in 1974 when nationalism surged, the architecture education in Kookmin University started. After Su-geun Kim, a professor of Architecture in the College of Design, served as the dean of the College of Design, what was known as ‘Su-geun Kim Effect’ was increased. As dynamic media emerged in 2000s and demand on various architectural styles besides traditional ones got increased, a new school, major, and department called the School of Architecture was established in Kookmin University for the first time in Korea. As an independent school, there were many benefits. Since the ‘design exhibition’ first started in 1976, the early look of Korean modernism appeared and after the introduction of ‘urban design’ in 1987, the structural architecture has begun. With that, green design and lighting design got commercialized along with the design studio system as we see today. After 2004, the architecture paradigm was changed and since then, individual-based freestyle within a theme is being pursued. That is the architecture of today.”

Professor Park emphasized, “You receive education today and exert efforts for your work not because you want to but because of the thoughts and efforts made by many professors in Kookmin University in pursuit of quality education for a better future.”

After the lecture, the *critic session was provided. The students stood in their positions depending on school year to receive critics from the professors. The critic for undergraduates is a special event that allows evaluation of the educational achievement for the past 3 years and supports knowledge enhancement of the students in the School of Architecture. The works that were prepared for days and nights in the entire semester were realistically and strictly criticized.

＊ Critic: It is a word from ‘critique,’ meaning critics and reviews conducted in a university on the works of a student who plans to become an expert in a particular field. 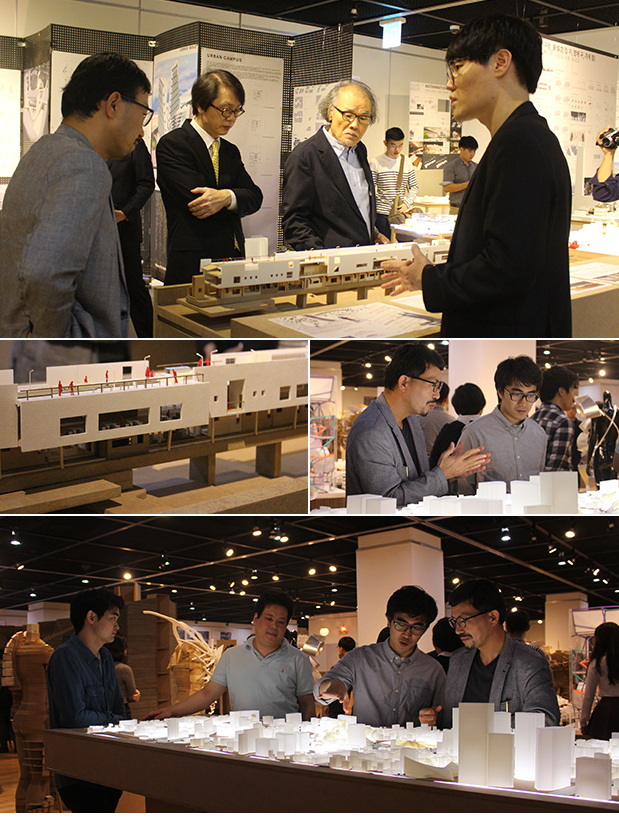 After the ceremony, the exhibition hall was introduced. In the first exhibition hall located right next to the entrance, there is a display of the works that expressed the 40 years of history in the Kookmin Architecture through installation and visual arts. Also, the works of the freshmen were exhibited on the left wall about 50cm in height. As you move towards the next exhibition hall, two paths were seen. You can freely choose to go wherever you want. There were works of juniors on one wall whereas the works of the 5th graders were displayed on the other wall. In the middle of these, the works of sophomores and seniors were arranged in 2 lines. At the frontmost line of the sophomores’ works, a beam projector was installed and in the visual images, you can see the look of the sophomores wearing their ‘wearable Architecture’ as they walk down the runway.

Professor Kyung-hoon Lee in the School of Architecture briefly explained the guideline of the exhibition.
“Since its establishment in 1974, ‘The Architecture Triennale’ has been held every 3 years. In celebration of its 40th anniversary, this big event was planned by comparing architecture with other sociocultural phenomena. From what we’ve seen, the studio system was first introduced in Korea, so we had some time to have critics by other renowned figures in the industry and talk about the development of the educational system. For this exhibition, the students had theme-oriented courses depending on studio as ‘Goldberg Machine’ was for freshmen, ‘Wearable Architecture’ for sophomores, ‘Typical Architecture Education’ juniors, and free imagination inspired architecture for the seniors and 5th graders. Please enjoy the exhibition in consideration of the characteristics.” 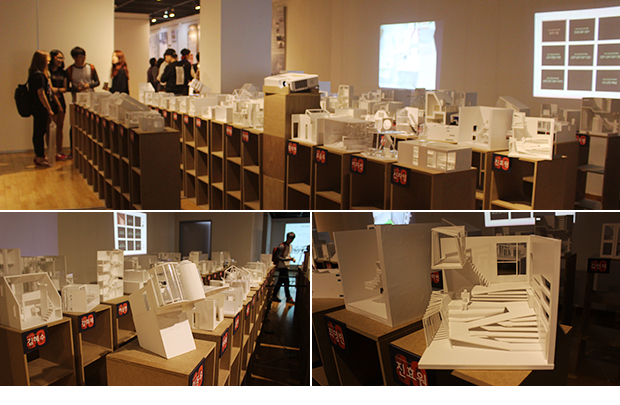 The freshmen created their ‘own room for ‘the Goldberg Machine’ project.’ ‘Goldberg Machine’ indicates satirical aspect and unpredictability felt from a grandiose and complicated contraption designed to do a simple job. The students newly reorganized their rooms using non-explicit satirical technique. ‘Their own rooms’ that were interior design as well as the most basic unit of architecture was a project that allowed for the objective view of designers’ living sphere. There were many works that delicately connected boards, a topnotch technique unlikely to be expected from the level of freshmen. 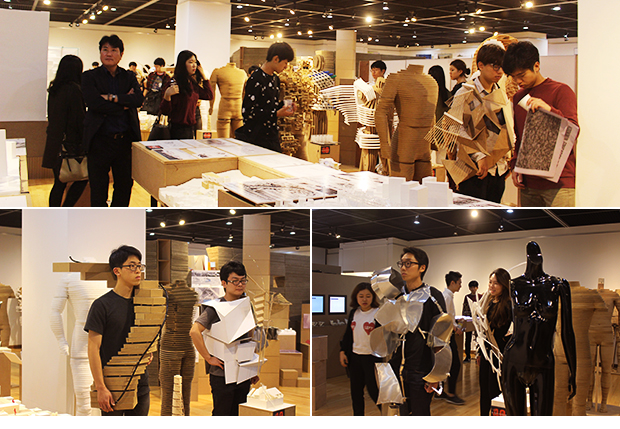 The sophomores executed a project called ‘Wearable Architecture.’ As its name implies, ‘Wearable Architecture’ was a unique attempt that did not look like fashion design but expressed architectural characteristics. Within the frame of modern arts that does not have limitation, this project enabled the strength to integrate the characteristics of architecture and other resources while stressing importance in architecture. Life-sized works were the perfect architecture that embodies its true essence while reflecting the installation and 3D arts. At the opening, the students gave a performance by wearing their own works in front of the audience. 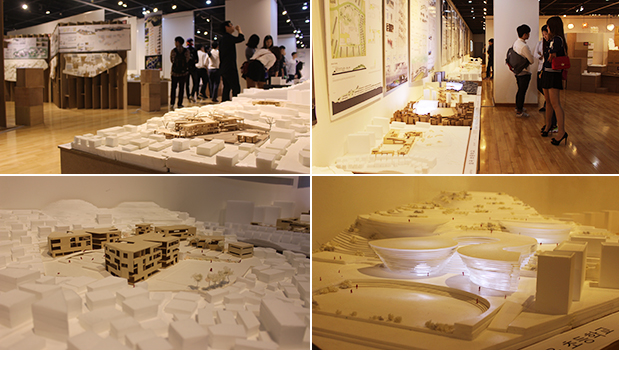 The juniors promoted the most typical architecture project. With the mind ‘of adhering to the basics,’ this project intended to learn about the structure of architecture, keep on creating reasons of architecture, and recognize the fact that architecture was the fundamental field of academe and its values did not change based on the passage of time. As there are houses where people live, the objective of architecture is to use hands to make a place for living as pursued by mankind since the ancient times. Among all projects, the one promoted by the juniors was the project that helped us realize the basics of architecture, the importance of places, people, and relationships. 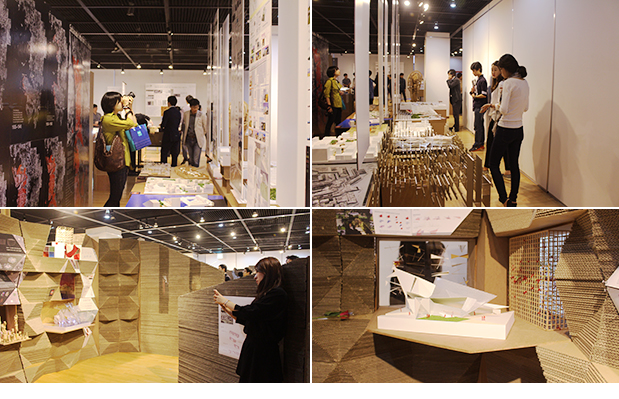 The seniors and 5th graders promoted the project with free themes. Freshmen and juniors who laid the foundation on design and basic structure through 2 projects while seniors exerted efforts to create their own ‘conceptual ideas and thoughts’ in architecture by intensifying what they have learned. It is the period of thinking about how ideas are developed and turned into reality. In the spiral-shaped wall using corrugated cardboards, the works of seniors were displayed. All works expressed different stories with a unique concept. It was possible to witness the refined works of the seniors as well as the architectural lighting in the middle that attracted the attention. It was amazing to see how they care even for a delicate part of the ceiling. It was like they planned not only the center of the project, but also the introduction, body, conclusion, and period that punctuates the end.

When students reached the 5th grade, they learn how to carry out a project while attempting to hone their creativity. As a pre-architecture before making a step forward to the society, it is the period to reorganize one’s personal thoughts and values. In this Triennale, the 5th graders must be the ones who were very serious and got nervous the most. The works using woodrock, hard boards, and acrylic plate showed their passion and love for architecture while letting us understand their pursuit of perfection in the works. We hope that they will have a bright future as their passion and efforts are truly deserving of a great success. 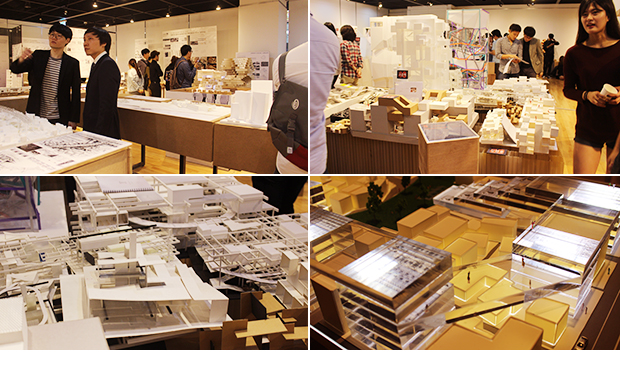 The Architecture Triennale in 2014 was successfully concluded. Throughout the Triennale from the entrance until the end of the works, it created an atmosphere as if seeing a grand-scale movie. Although their works were complicated, the exhibition hall for the audiences was perfectly arranged. Thanks to this, the visitors could view the changes of architecture along the exhibition course. Including the modern architecture at the early stage and that of today when signs of architecture are active, it offered an opportunity to get closer to architecture. Architecture is a comprehensive assembly of human arts. It does not use grandiose words; however, there exists its own design language. Architecture revives, teaches, and cultivates men with its language. As the students utilize the language they have learned for 5 years, we hope that they will feel the same sense of pride that they’ve experienced in the exhibition.

The 40th anniversary of the Kookmin Architecture will remain with the existence of good education in the future and it is believed to be one of the pioneering sources of Kookmin University.

Aggregation, the 42nd graduation fashion show of the Department of Fashion Design in Kookmin U…