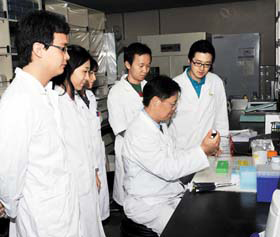 Kookmin University raised income of 8 hundred million won through technology transfers. It is ranked 5th among Korean universities. Professors of natural sciences and engineering conducted various researches which led to intellectual property rights (patent, practical draft, design) and as a result, the number of intellectual property registration per professoris ranked 7th among universities. In the case of patents, the professorstried to apply for 140patents, among which 81 of them are registered.

Professors at Kookmin Universityare the ones who can get these excellent results. For example, Professor Wong Choi from the Department of New MaterialsEngineering published a thesis with Prof. SunKuk Kim from Kyung Hee University last Augustin "Nature Communications," which is a famous academic journal in England.The title of the thesis is called 'High Movement and Low Electricity Thin Film TransistorsUsing Multiple MolybdenumDisulfide.' If graduate students are not from the Dept. of Natural Science and Engineering, the title of thesis may sound like a code, however if we try to this saying simply, they invent a new transistor which plays a key role in making clear display screensuse less electricity than LED TVs.

In the case of Prof. Jang Sik Lee, who works in the same department, he has been continuously publishing theses in famous academic journals like nature ‘Nanotechnology’ and ‘Nanoratous.’ A part of his research which the professor focuseson is the ‘development of non volatile memory devices.’ These days, cell phones and TVs, which can be flexible their figures show up in SF movies and electronic CF. is what this professor is fighting for in researching this technology.

The Foundation of University- Industry Cooperationat Kookmin University said various new technologies which professors developed received praise after publishing them at theE-Pitch Contest Expo. ‘Intelligent variously changing notice signs’ which change their content depending on traffic is representative of these technologies. Kookmin Universitysaid they pay attention to various new skills which main companies and schools utilize, as well as research results which have been published in ‘Expo.’