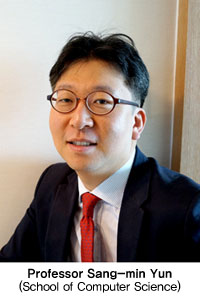 The project “Development of 3D Reconstruction Technology of Image-based Translucent Objects” conducted by Professor Sang-min Yun of School of Computer Science in the College of Electrical Engineering and Computer Science of Kookmin University was selected on April 10th to one of the ICT projects that were promoted among a total of 40 Samsung Electronics’ Future Technology Fostering Projects in 2014.

Samsung Electronics’ Future Technology Fostering Projects are the projects that have been promoted by the Samsung Group from last year in support of the creative economy by the government and cultivation of the core basic science technologies and for the three major areas of ▲ basic science, ▲ material technology, and ▲ ICT area, a total of 1.5 trillion won of research fund will be supported for 10 years.
The selected “Development of 3D Reconstruction Technology of Image-based Translucent Objects” of Professor Sang-min Yun refers to the development of the technology that can analyze physical properties of complexly formed translucent objects from an arbitrary point of view by reconstructing the translucent objects into 3-dimension from various image inputs in a camera. To achieve the 3D reconstruction of a translucent object, analysis of optical characteristics between the translucent object and images using computer vision technology, optimization through mathematical and statistical analysis on 3D reconstruction technology, and effective visualization technique of large data are to be implemented.
The research period of the selected project is from June 2014 to May 2015 and the total research expense is 150 million won. The technology developed through this project is expected to be utilized for 3D medical image, 3D visualization of microorganism and celestial body, and 3D movies and gaming.
Professor Yang Guk of Seoul National University who participated as a judge in the project screening explained, “About 70 judges in Korea discussed the basic concept for several days to select creative and challenging projects’ and added, “Overseas scholars who participated in the overseas screening, such as Nobel Prize winners recognized the high quality of the participating projects.”