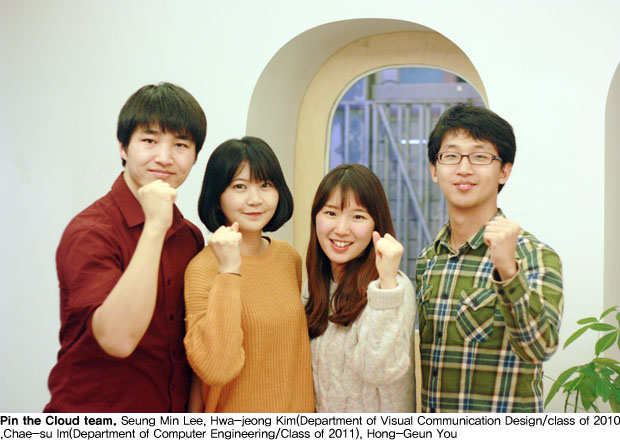 ‘MS Korea Imagine Cup’ is the world’s biggest technology competition for students older than 16 years old. Since its establishment in 2003, it has been held every year to solve global problems with creativity and imagination in use of IT technologies. The core competing area of the 2014 MS Korea Imagine Cup is the unique and entertaining ‘Game’ that can be enjoyed by people all over the world, besides ‘Innovation’ that selects an innovative software to change people’s lives and ‘World citizenship’ that competes with ideas to overcome difficult social issues.

In cooperation with Busan Metropolitan City, the selection of the national representative for the 2014 MS Korea Imagine Cup was held in the Centum Campus of Busan Dongseo University from the 28th in the presence of about 1,000 people. Two teams from each area competed fiercely, and Kookmin University team introduced an information sharing app called ‘At Here’ that allows for easy access and sharing of information. The emphasis on the necessity of information sharing throughout various platforms was highly evaluated for the final representative.

For this event, professional judges from the academic and business circle as well as over 1 thousand of audience judges participated. Participative environment was created as the audience judges continued to raise sharp questions beyond simple asking. CEO Kim of Microsoft Korea said, “I am very impressed by the passion and creativity of the students from all over the nation” and added, “I expect the Korean representatives that are selected in Busan, the city leaping as a global center, will have a good result in the world competition and I hope the winners will serve as an ideal model to the world students who are dreaming for the future.”
We met Chae-su Im who was selected as the Korean representative of the 2014 MS Korea Imagine Cup.

Q. Please explain about “At Here” project.
‘At Here’ is an app that easily and quickly enables sharing of various contents with people next to us. When we encounter people for a meeting or so, there are situations that demand information sharing. But it is difficult and awkward to share information with someone whom we are not familiar with. It is because we have to know their account information and let them know ours. While promoting this project, our team also had meetings with many people and often felt discomfort. In order to remove such problem, we planned and made ‘At Here.’ With ‘At Here,’ we can easily and quickly share various contents within the same place.

Q. There seems to be other applications realized with a similar idea. Tell us about the features that differentiate it from others.
As far as I know, there is no app that allows sharing of various contents without an account. For information sharing, e-mail, cloud, and USB are used and in case of e-mail or cloud, we have to know the account of the person. In case of USB and Bluetooth, it is impossible to share information with many people at once. Since our ‘At Here’ doesn’t require an account, there is no need to disclose our own personal information when trying to share contents. Once you share our app through the app spot, you can share various contents anytime with as many people as possible.

Q. The team is composed of students from other university. How did you make the team?
I am currently working for the 7th term of the Microsoft Students Partner (MSP). Through that, I met Seung-min Yi from Handong Global University and Seung-min introduced Hong-geun Yu. Also, Hwa-jeong Kim is from the same university and was introduced by my friend.

Q. Tell us the merits and demerits as well as any interesting experience while working together with students from other university.
Hwan-jeong, Seung-min, and Hong-geun did not know each other before but there was a close friend between them. We mainly prepared for the Imagine Cup in our school but the members from the other school knew the menu at our cafeteria better than us. Since we are attending a different university, the members from the other university had to come to Seoul from Pohang to have a meeting with us every weekend. 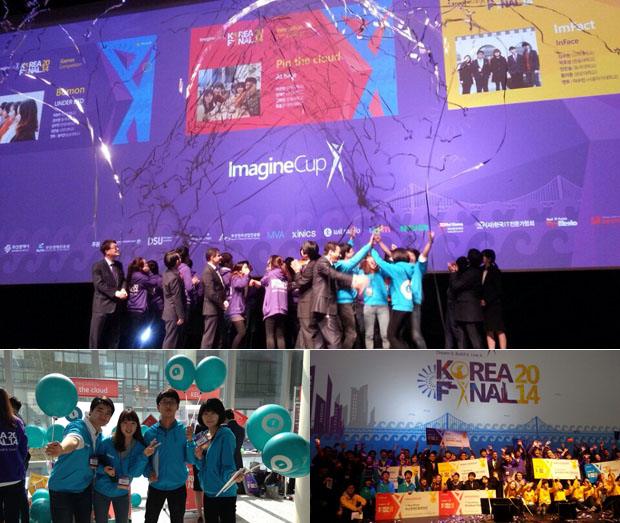 The 12th world event of ‘the Imagine Cup 2014’ will be held for the first time in Seattle where the headquarters of Microsoft is located and starting from the 1st event held in Barcelona, Spain, Korea took the 3rd rank in the ‘metro-style app’ category in 2012 and special prize in 2013.
We expect that ‘At Here’ of ‘Pin the cloud’ that is made by the team of Kookmin University will have a good result in the world competition.