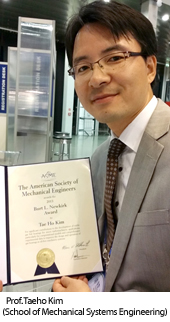 Prof. Taeho Kim in the School of Mechanical Systems Engineering was awarded with the Burt L. Newkirk Award by the American Society of Mechanical Engineers (ASME) in the 2013 World Tribology Congress held in Torino from September 8th to September 13th. The Burt L. Newkirk Award is a prize given to a scholar under 40 years of age who made a significant academic contribution in the field of tribology and since its establishment in 1976, Professor Kim became the first Korean to receive this award. (Homepage of ASME: https://www.asme.org/about-asme/get-involved/honors-awards/achievement-awards/burt-l-newkirk-award)

‘Tribology’ that is being studied by Professor Kim is an academic field that deals with the fundamental and application technology related to lubrication, friction, and abrasion, and it is a key technology for effective power delivery, reduction of energy loss, and environmental improvement. Professor Kim’s academic excellence in the research development of the gas foil bearing, which is the critical technology element for micro-turbomachinery,

has been globally renowned and especially, this award was given in recognition of his contribution on the mathematical modeling and construction of experimental database for gas bearing design and improvement of system operation for an environment-friendly oil-free machinery. The Burt L. Newkirk Award is given through strict screening of recommended and registered nominees by the five world-renowned scholars in the field of tribology from the U.S., France, and Japan.

Since the establishment of this award in 1974, Prof. Taeho Kim was the first Korean who received the Best Paper Award by ‘the Journal of Tribology’ published by the American Society of Mechanical Engineers in 2011 and he also received the same award in 2012. That is the reason why the award this time is not a surprise. In addition, Professor Kim published about 100 theses in local and foreign academic journals and seminars and has 8 patents in Korea and overseas countries.

The research of Professor Kim is applied to dynamic fields, from the high-temperature bearing that supports propulsion of high-tech spacecraft to the environment-friendly and highly fuel-efficient oil-free turbo charging technology for vehicles. Today, various studies on lubrication design of a refrigerating compressor for heating and air-conditioning system in use of terrestrial heat, high-efficiency journal bearing for motor, and design of a micro-gas turbine rotor for distributed generator are being promoted and he recently initiated the planning of a rotor for the air compressor in a fuel cell hybrid vehicle.

Meanwhile, Professor Kim has consistently promoted research projects with Hyundai Heavy Industries, LG Electronics, and Korea Institute of Science and Technology (KIST) and he plans to start a project with Hyundai Motors from this October. He is also taking the initiative in the construction of industry-university-institute R&D collaboration system by encouraging internship of the students in the graduate course in KIST.