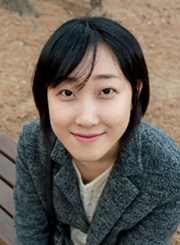 The article “Mechanochemically Reduced SiO2 by Ti Incorporation as Lithium Storage Materials,” co-authored by Kyungbae Kim, a master’s student in our university’s Deparment of Advanced Materials Engineering, has been published in ChemSusChem (Impact Factor: 7.657), an SCI listed international academic journal in the field of energy and chemistry.
Kyungbae Kim participated as the lead author in the study, which successfully showed how to increase the efficiency of silicon for use in lithium batteries.
Many researchers are working on commercial applications for silicon (Si) used as an anode for large-scale lithium-ion batteries. They have been focusing on overcoming poor cycle performance caused by silicon’s large volume change during insertion and extraction. However, efforts to utilize nanotechnology and incorporate carbon to improve performance have been hindered due to high production costs. As a result, researchers are increasingly turning their attention to silicon dioxide (SiO2), which possesses a relatively better cycle performance and is more cost-efficient. But SiO2 also presents a problem in that it has low initial efficiency.
Thinking outside the box, Kim used a high energy mechanical milling (HEMM) of SiO2 and titanium (Ti) metal powder for the in-situ formation of a SiO2-x/TiOx composite, from which he separated nano-sized Si particles. Thanks to this SiO2 reduction process, SiO2 initial efficiency is greatly enhanced. The resulting complex structures in the SiO2-x/TiOx composite work to reduce the volume change during insertion and extraction, thus allowing for a larger capacity and stable cycling performance. In its ability to enhance the electrochemical performance of Si anodes, Kim’s simple process takes us one step closer to commercialization. 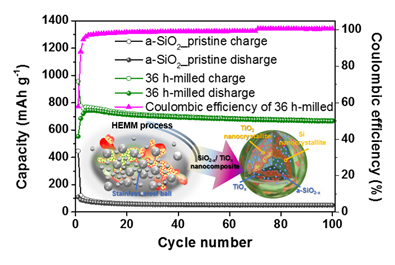