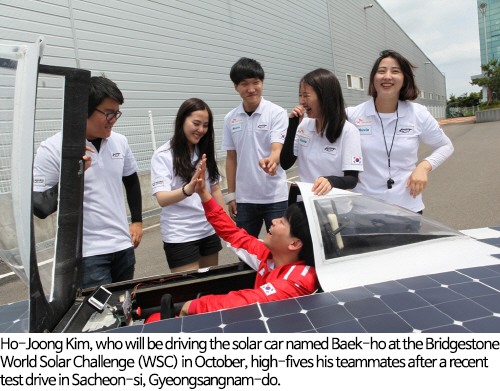 KUST enters the world’s largest solar car competition.
Facing foreign teams that have invested the equivalent of billions of won in their solar cars, “we are going to show the world the quality of Korean solar technology” with a car that cost only KRW 100 million to build.

Nine university students covered with fiberglass dust moan with fatigue as they try to sleep in a studio apartment in Yeongam-gun, Jeollanam-do. These students are members of Kookmin University’s undergraduate student solar car team, KUST, which will be competing in the Bridgestone World Solar Challenge, the world’s largest solar car competition, held in Australia this October.
The WSC, held biennially, has a special status that sets it apart from other car races. Starting at Darwin, in northern Australia, solar cars powered by nothing but solar energy race each other along 3,021 kilometers of road to the southern city of Adelaide. Teams set off at dawn each day and make camp at the point they have reached at nightfall, continuing the race over six days.
This race has earned the notorious nickname “death rally” because it is difficult to even complete, let alone finish among the leaders, without superior equipment and technology. As such, just completing the hellish 3,021 km course is enough for any team to gain recognition for its eco-friendly automobile technology. KUST was the first Korean university team to enter the race in 2011 and this year represents its third attempt to win. On its first attempt, it reached 2,013 kilometers and came in 15th. This year, KUST is aiming to finish in the top 10.
KUST began designing the car they will race two autumns ago and began building it early this year.
Though its technology is second to none amongst the competition, budget limitations have been a burden. Japan’s Toukai University team, a strong contender in previous races, receives support from Toray Industries. Stanford University’s team also receives plentiful support from prominent corporations. In contrast, KUST had to build a solar car with the 50,000 Won monthly membership fees collected from its club’s members. The club had approached many Korean corporations for support but was rejected repeatedly. One of the key requirements to complete the 6-day race is having adequate camping equipment and supplies. KUST spent over 6 months trying to gain sponsorship from leading outdoor equipment companies in Korea only to be met with the same answer from all of them: “no.”
However, a tight budget and lack of local support was not enough to quell the passion of KUST members. KUST continued to approach businesses and was able to purchase parts for the car at production cost prices. It also found production facilities to use at no cost. This January, the team entered facilities at the Research Institute of Medium & Small Shipbuilding’s Jeollanam-do and began building their car.  As actual test drives became necessary in June, 20 KUST members moved to the Sacheon Cyber Aerospace Center in Sacheon-si, Gyeongsangnam-do, independently providing for their own room and board.
Ho Joong Kim (KMU, ’11), the driver for this year’s competition, explained that "in order to meet the time restrictions we had on the production facility, we built the car while sleeping only every other day.” There were also cost problems. A car running on solar energy has to be as light as possible, so ideally the car body should be built with carbon fibers. The cost of this was a significant challenge, but like the saying goes, “if work hard enough, the heavens will reward you”—corporations that heard of the team’s passionate efforts started to offer help.
SK Chemicals promised 0.2t of carbon woven Prepreg for the car. Fiber company, Huvis offered to provide 150 pieces of clothing, such as t-shirts and jackets, for the team to wear during the competition. With the support from these two companies added to membership fees and alumni support, the manufacturing process was given a new impetus. KUST was finally able to complete the carbon fiber solar car, Baek-ho.
Thanks to passion, commitment, and support, KUST was finally able to finish preparations. The next step now is the long and hard race in Australia for a top-ten finish in the WSC.