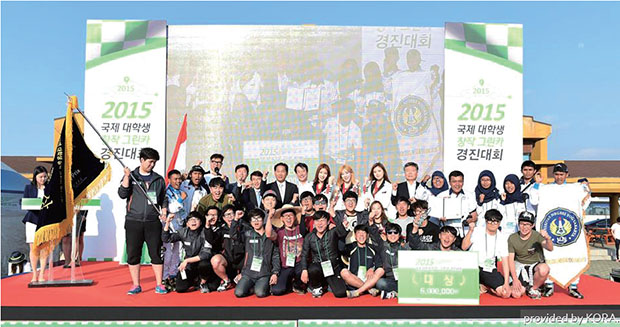 Have you heard of KUST and KORA? KUST stands for Kookmin University Solar Car Team and KORA refers to Kookmin Racing. The commonalities between the two are that these two teams are made up of Kookmin University students and that both of them have been awarded several times in a number of international automotive engineering competitions. To delve into how these teams managed to achieve such success, the Kookmin Review had interviews with students representing both KUST and KORA.
KORA is made up of students from the College of Automotive Engineering; however, KUST is made up of students from various majors and backgrounds. They include students from the College of Electrical Engineering and Computer Science, students from the College of Business Administration, students from the College of Automotive Engineering, etc.
KUST was founded with the name of ECOC which refers to Eco Car in 2007 and changed its name to the current name, KUST, in 2012. As its name, "Kookmin University Solar Car Team" implies, this team of students make a solar car and with their solar car, they have participated in WSC, also known as World Solar Challenge, which is held every two years.
Recently, the opening ceremony celebrating this year's car, BaekHo, was held in the concert hall at Kookmin University. There were many of the benefactors who aided KUST in making the car and getting the resources, and there was also the president of Kookmin University to celebrate with the team.
In this year's competition, participating teams are aiming to be the first to arrive in Adelaide after departing Darwin in Australia. It is about 3000km between Darwin and Adelaide and participating teams have to finish driving with their solar car. In the competition held in 2013, KUST managed to drive 2013km with its previous model solar car named Dokdo, but unfortunately could not finish the race. Nevertheless, with such a record, they ranked 15th out of 47 teams which was a big improvement compared to what KUST achieved in the 2011 competition.
So, what KUST is aiming for in this year's competition is rather straightforward. It is aiming for finishing the race and reaching Adelaide with its new version of solar car named BaekHo, and being ranked in the leading bunch.
The vice president of KUST, Sung-Wook Lee told Kookmin Review in the interview that in the beginning, he was being kind of greedy in a sense that he wanted to do and make something by himself. But now, he prefers his team members to be able to join in enjoying these fun and exciting moments while making joyful experiences with many amiable people.
Compared to KUST, KORA has a longer history of 30 years and it has been awarded numerous times with its automobile. While KUST participates in the World Solar Challenge, KORA participates in quite different competitions. One of them is called Formula SAE, which is an international student design competition organized by SAE International, formerly the Society of Automotive Engineers. In this year's competition, KORA ranked first in Asia and fourth in the world.
KORA has also participated in other competitions such as Shell Eco Marathon, KSAE Baja & Formula, KASA, etc. Recently, KORA has been awarded an overall gold prize from KSAE Baja & Formula. In addition, KORA received a grand prize from the 2015 International University Students' Creative Green Car Competition.
Sang-Su Kim, one of the board members of KORA, expressed the desire that he wants his future KORA members to put steady efforts to study hard so that they can make their dreams a reality. Kyung-Jae Heo, team captain at the International University Students' Creative Green Car Competition opined that despite the several awards KORA has recently been awarded, he wants its members to be humble and put forth efforts to develop the team further.
It is quite amazing that both KUST and KORA, carmakers comprised only of university students, actually make a car with their hands and win several competitions. Some of the students were so determined that they even decided to take a scholastic hiatus as they were committed to car making. With such efforts, it is highly likely that both teams will attain even better results in the near future and enhance Kookmin University's position and reputation.

Our Boxing Champion and the KMU Boxing Club