Our Boxing Champion and the KMU Boxing Club 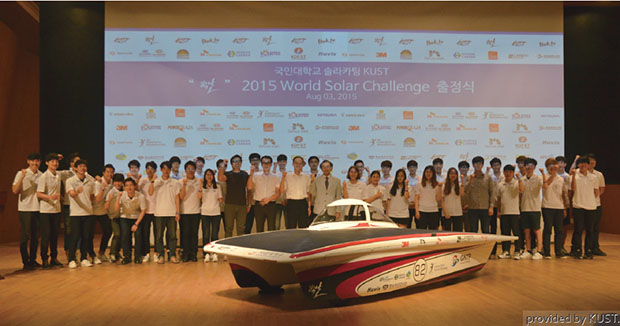 Gyu-Seok Lee, majoring in Business Sports at Kookmin University, won first place in the 17th National University Boxing Club Competition held at Mangsan Beach. The competition was held on 2 August and representatives from many university clubs participated. There were two representatives from Kookmin University, Jun-Seung Park and Gyu-Seok Lee. Jun-Seung Park won the first match, beating the representative from Yonsei University, but lost by a narrow decision in the second match to a representative of Seoul University. Gyu-Seok Lee, on the other hand, won the trophy in 72.5kg, beating the boxers of Korea University, Seoul University and Yonsei University in a row. He won the competition even though the supporters were all against him; he was surrounded by many other university students cheering for the opponent while he only had one supporter to cheer him on.
While other boxing clubs have many members, the Kookmin University boxing club is not very popular despite its great achievements. The boxing club was founded in 2014 and has been operating each semester since then. Because it is relatively newly founded compared to other clubs at Kookmin University, there is no room designated for the boxing club. However, every member of the club works out twice a week in Building 7’s Mudosil on the 1st floor from 6:30pm to 8:00pm. It is also possible to work out during their free time if they pre-register the venue. Members can also participate in tournaments each year if they are willing. Any Kookminian interested in boxing and who can enthusiastically participate in the exercise hours can join the boxing club no matter of their age, year of study or gender. Every decision is made solely based on the members’ opinions and each member can make their own decision on whether or not to participate in the various activities including after-parties. It can be a great opportunity to meet new people with the same interest and also make one’s body healthier than before. In order to join the club, simply send a message to the club leader, Jung-Geun Kim, his number is 010-8816-2049.
The winner of the competition, Gyu-Seok Lee believes that the Kookmin University boxing club helped him a lot to win the championship. He said that he was psychologically motivated because he was participating under the title of Kookmin University. Moreover, due to the friendly and passionate atmosphere in the boxing club, it was very easy for him to concentrate on exercising. Systematic programs of the club also helped to build his body and keep himself motivated for the competition. He also said that he wants to participate in the championship with the juniors from the club next year and get good results.
To lead a healthy life both psychologically and physically, it is important to have regular exercise. The Kookmin University boxing club can motivate and provide crucial help to take an interest in exercising. Now that the vacation is over, it is the perfect time to start a new challenge!