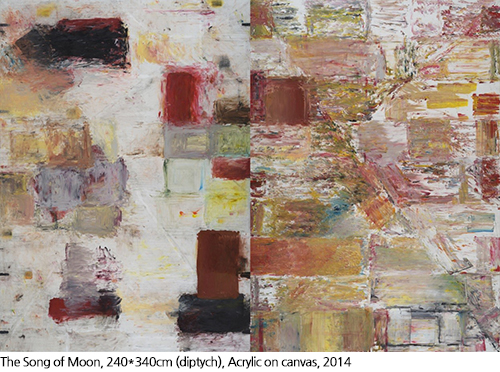 An individual exhibition of artist Young-nam Park (1949 ~ , professor in the Department of Fine Arts in Kookmin University) who is one of the representative artists specialized in abstract paintings was held in November 9th in Kumho Museum of Art in reflection of the images in nature through the comparison of colors and depth of light.

The artist has explored abstract painting that puts emphasis on gestures and works by using hands to apply paint directly on a canvas. Through this exhibition ‘Self Replica,’ he presented big and small color series that look similar to each other but create an entirely new formative tension through the reproduction of reproduction. With his main work ‘Black & White’ that began in 1990 as a series of ‘Self Replica,’ the exhibition composed of 100 artworks strictly selected from about 200 pieces created by drawing grid lines with charcoal and using hands to apply colors along the coordinate values. The artworks of this exhibition transcend mere expression of independent space in a canvas through the division of lines and sides. Rather, it seems intensification into 3-dimensional work that is harmonized with the entire exhibition space through expansion and contraction connected to the space outside the canvas.

This exhibition will provide an opportunity to peek into the work process and mental world of Young-nam Park, who consistently attempts training (reproduction of reproduction) to grasp the images of more fundamental nature, through various artworks like the painting series that show subtle contrast and harmonization of white and black, series of color works shown in layered colors, and stained glass works. 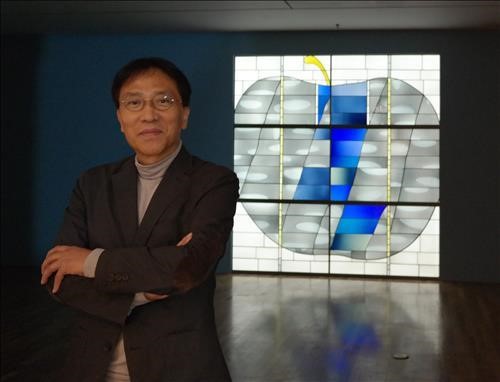 The painting of emotion
Young-nam Park is an artist who works through emotion rather than rationality. Looking at his artworks, it is hard to find themes, forms, or even visually perceived pattern. Rather, impression from an object is reproduced with the basic elements like lines, sides, and colors. His paintings create dynamic sceneries through the relationship of one color to another as well as that of light and dark, along with the harmonization of lines and sides, transcending the mere description of forms or situation. The artist confessed on his work note by saying, ‘My works are fairly compulsive’ and ‘I first decide a theme, target of expression, and its meaning and then reject conventional practice on images and colors of the target.’ He revealed that interpretation on his works should be not done through concept-oriented understanding or knowledge but rather with artistic intuition and emotion.

Light and colors
The artworks of Young-nam Park give an impression of instinct and tactile sensation. It is because of the feature of his works using natural light and finger painting. He works while sun is up and finishes what he does as the sun sets so as to reflect colors not under artificial light but with natural light. Therefore, his paintings are the traces of accumulated natural light and through such method, artificial colors show more dimensional depth. Especially, the works of ‘Black & White,’ the lifetime topic of the Mr. Park, create stronger impression on colors from natural light and its dignity.

The reason of his approach using natural light while limiting artificial light can be found from his journey of arts when he was young. At that time, he often painted outdoors like Deoksu Palace and naturally learned about arts. Since then, he has reflected the absoluteness of nature (light) and colors in his paintings.

Gesture of Dynamism (finger painting)
The biggest distinction of Mr. Park’s work process is to paint not with a brush, but with hands. He has presented gesture and act that emphasized abstract paintings by using hands to directly draw or apply colors on a canvas. Acrylic paints that set easily are quickly spread, pressed, touched, and scratched to fill a canvas and such series of actions create freewheeling, dynamic, and interactive impression. Since he started his career as a full-time artist at the end of 1980s, he has completed his artworks only using his body while excluding the use of any tools. As a result, his paintings exude unique energy that is somewhat emotional but expanding alongside the aboriginality of modern arts.

Grid – Expression and construction
Another thing to notice on the paintings of Young-nam Park along with allover and finger painting is the grid that divided the screen with lines or cells. Grids first appeared in his artworks in 1988 and as he went through ‘Gogh and Mondrian’ work in 1990, the screen with regular grids and grid-demolishing brushing became the basics of his artworks. The record of vivid and free hand movement is harmonized with the stable existence of grids on a canvas, as if complementing each other. Mr. Park reflects emotional release and repression through grids on the canvas while showing the order that exists in the paintings of a free-spirited artist. 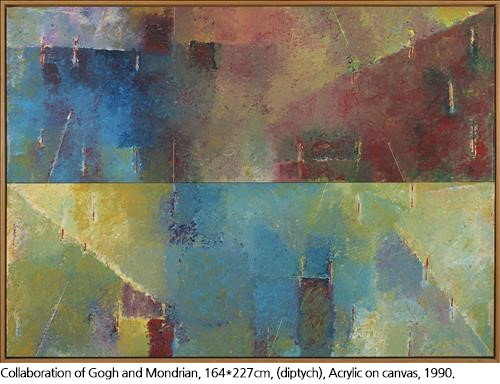 *< Gogh and Mondrian> (1990)
The expression through strong colors was from Vincent van Gogh and structural grids are from Piet Mondrian. He shows the space where emotional release and control exist by mediating the relationship between the vivid and briskly expressed screen and stably constructed grids.

Reproduction of reproduction
Mr. Park says his artworks are the course of consistent ‘Self Replica’ and it will continue. In other words, an artwork becomes a model of the next work and such attempt stimulates the birth of each one by imitating each other like a mirror. The artworks that were the results of ‘reproduction of reproduction’ are similar but each is a work of its own and not identical to other works. The series of