Interior Design students Hae Won Kim, Ji Eun, are awarded the Concept Prize by the IF Contest Exhibit, which is one of only 3 design contest exhibits worldwide.

The IF Design Award is run by German International Forum Design and is one of 3 design contest exhibits carried out by choosing world designs.  It began in 1953 by RED DOT from Germany and IDEA from America.

It was held with "My Green Shower Pleasure" as the subject and various standards such as innovation, quality, practicality, functionality, tailorability, materials, sustainability, social responsibility, universal design, and stability were employed to show how designers solve problems through the use of various methods. A total of 15,000 works were displayed from 62 nations, and our university was awarded a concept prize at the exhibition.

Li Bei who was a juror in the exhibition said: "The design is very creative and was developed by observing user’s discomfort and demands when eating cup noodles. The new design is perfect for easy and hygienic use, and the design package is well suited to be mass produced and will accomodate our demands like saving resources and conserving nature because of reducing garbage.

For this work, two students from Kookmin University, one from Konkuk University and one from Sungshin Women’s University participated together. They met each other when they were in high school and made a small group for doing volunteer jobs. Now they have participated in the exhibition with their first project. 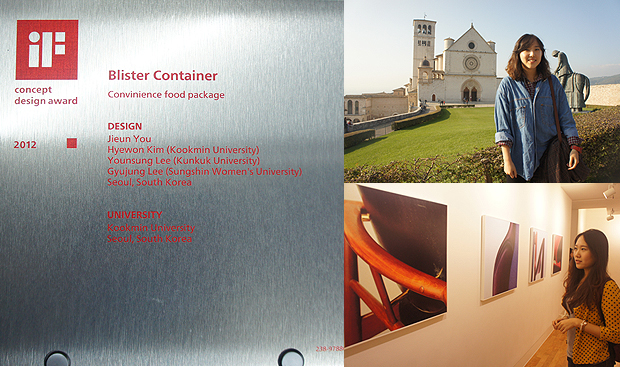 As a solution to this problem, I chose the pill package principle. The pill package principle is to push the plastic parts of packages strongly to get inside of one instead of the difficulty of peeling the cover to take the product out, so I created the package based on this principle. I use this advantage for the cover of cup noodles. When you pour water, you don't need to peel the cover wide because you just push a plastic part to allow it to go into the cup. Though this solution, I was able to solve both the problems of the paper cover and powder.

Q. State your feelings about having received the award.
Even before participating in a contest exhibit, doing design is demanding. However, I learned that design is interesting through the processing of this work though various access methods. After getting good results I gained a lot of confidence.