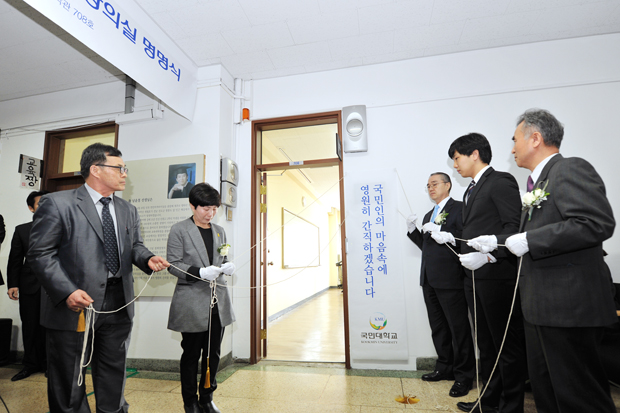 Last year, Kookmin University alumnus Yun-cheol Nam (member of Class 1998, English Language and Literature Department; member of Class 2005, Graduate School of Education; and teacher at Danwon High School) died while rescuing his students in the Sewol ferry accident. To honor his noble sacrifice and to express his love towards his students and promote his mission as an educator, the lecture room No. 708 at the Bugak Hall of Kookmin University was renamed as ‘Yun-cheol Nam Lecture Room.’ Nam took his last class in this lecture room. The will of the late Nam, who practiced his mission as an educator and expressed his love towards his students by sacrificing his life, was engraved on a signboard installed on the wall of this lecture room.

Last April 8, 2015 at 10:30 in the morning, the naming ceremony of the lecture hall was held at the hallway of Bugak Hall. Those who attended the ceremony were the parents of the late Nam, and school officials including President Ji-soo Yu, the Executive Vice-president, the Vice-president, and other school representatives. The ceremony was held in this order: silent prayer, commemorative address, funeral oration, and signboard unveiling ceremony. The mother of the late Nam, Ms. Nam Gyeong-ok Song, expressed her gratitude by saying, “I hope that the noble will of my son will be restored at this place.” During this event, the newly-established Yun-cheol Nam Scholarship was granted to ten deserving students in order to commemorate the deceased teacher’s last wishes. 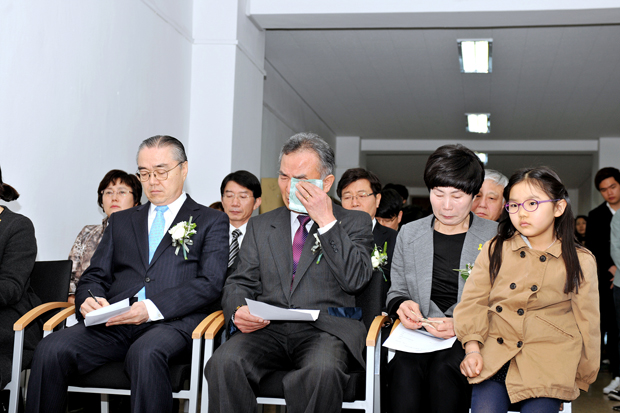 In his commemorative address, President Ji-soo Yu said, “The graduate Nam’s spirit of self-sacrifice is a great example for everyone living today. In fulfilling his will, all of his juniors who will study in this lecture room are expected to take the initiative in practicing the spirit of service and sacrifice.”

In the funeral oration, Professor Jong-yeol Yun said, “We want to learn and practice the ‘true love and spirit of sacrifice’ through Nam’s noble deed. I hope that his memory will stay with us in order to encourage the future hopes and dreams of his juniors at Kookmin University.”

The signboard of the Yun-cheol Nam Lecture Room was engraved with: “The noble will of the late Yun-cheol Nam (Class of 2005, English Language and Literature Department), who practiced his mission as an educator and expressed his love for his students by sacrificing his life in the Sewol ferry accident, is engraved here.” At the center of the lecture room, a funeral wreath to commemorate the will of the deceased teacher was placed. 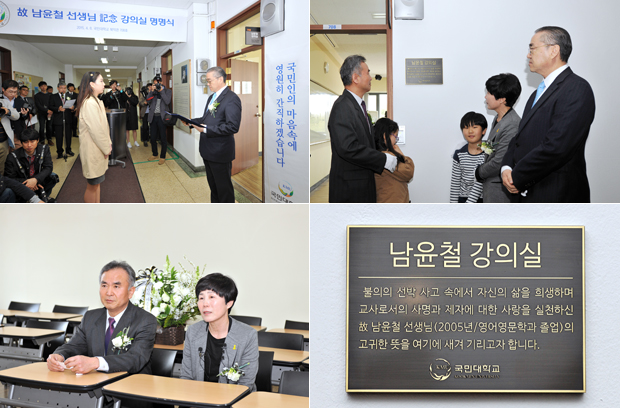