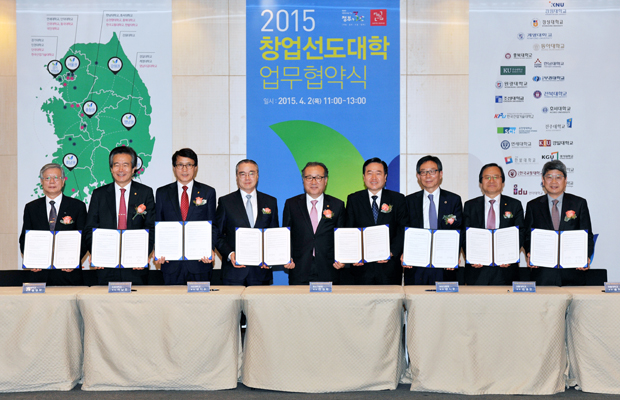 About 100 people were present in the event including Administrator Jung-what Han of Small and Medium Business Administration, President Si-woo Kang of Korea Institute of Startup and Entrepreneurship Development, the President Group of 28 startup leading universities, and heads of the Startup Support Teams. The participants strengthened their resolve to cultivate excellent future entrepreneurs by spearheading the ‘startup base’ in each area. In this event, an agreement ceremony, signboard unveiling, luncheon, and discussions were conducted.

Unlike in the previous year, the presidents of the seven universities that were appointed as Startup Leading University for 2015 directly presented in the event. They showed the vision and determination to develop future entrepreneurs starting at the university level.

Last January 2015, Kookmin University was the only university included at the ‘2015 Startup Leading University Cultivation Project’ in the metropolitan area. The university was allocated with a guaranteed maximum amount of 2.5 billion Won for its startup budget expenses for three years. Along with this achievement, the vision of Kookmin*Startup centered university was also announced - to cultivate the innovative, creative, and globally-competitive startup.

Through this startup project, Kookmin University will become the local strategic hub for startup development in the northern central city.

The Startup Leading University Cultivation Project, part of the government’s three-year plan to boost the economy, aims to ‘make universities as the startup base.’ Universities with excellent startup infrastructure and competence are identified to become eligible as ‘startup leading universities.’ The project supports the entire process of establishing a startup with this method: discovery of entrepreneur → startup education → startup commercialization → follow-up support.

The startup project aims to develop excellent entrepreneurs, who are engaged in local specialized industries, by utilizing the competence of the selected universities. This government startup project started in 2012 and through an annual assessment conducted during the guaranteed period of at least three years, each university is correspondingly supported with government budget ranging from 1.3 to 3.2 billion Won every year.

In the congratulatory address at the agreement ceremony, Administrator Jung-wha Han of the Small and Medium Business Administration said, “Follow-up support programs of the Startup Leading University Cultivation Project will be extensively reinforced this year.” He also added, “I hope that the startup leading universities will initiate the nationwide startup boom by discovering excellent startup businesses.”
Kookmin University, as well as the other 28 startup leading universities, will recruit future entrepreneurs this coming 6th through Startup Net (www.startup.go.kr).