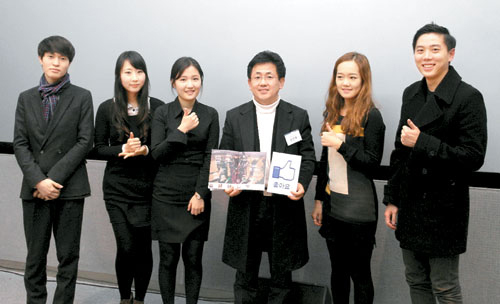 The Department of Industrial Design in Kookmin University promoted the design idea auction in the UIT Design Solution Center (graduation exhibition) located in the annexed building of the School of Design on November 16th for the first time this year. In the event, professional design companies that were interested in new ideas from the students as well as about 10 people from Samsung Electronics, LG Electronics, and small and medium businesses attended the event. Also, Secretary Nae-han Yun from the Korean Industrial Property Office evaluated the ideas to mediate design right protection and royalty agreement.

The idea of design auction was suggested by Professor Don-seong Jeong who takes charge of ‘product system design’ and he said, “Through a year of course, I promoted design patent for the design outcome of the students. Thus, I attempted the European auction to pave the path that realizes design right secured among the students.”

A person interested in a large company said, “I was surprised by the students’ level. It is hard for a large business to come up with an agreement right away but it will be a good opportunity to reinforce the industry-university cooperation.” The five teams that exhibited their designs in the design idea auction were ‘composed’ by small and medium businesses that were equipped with production capability. The five teams were 3rd Eye, Net Plus, Design Mall, Design Mu, and Monolith Plan and they contracted with the students. Once profit is raised through production, certain amount from sales or profit will be shared with royalty.

Kookmin University, selected in the BK21 PLUS (Brain Korea 21 Program for Leading Universities…

Minister Cho, Yoon-sun from the Ministry of Gender Equality & Family, visited the conferen…