University Festival, How Has It Changed?

From drinking culture to diverse culture with personal characteristics 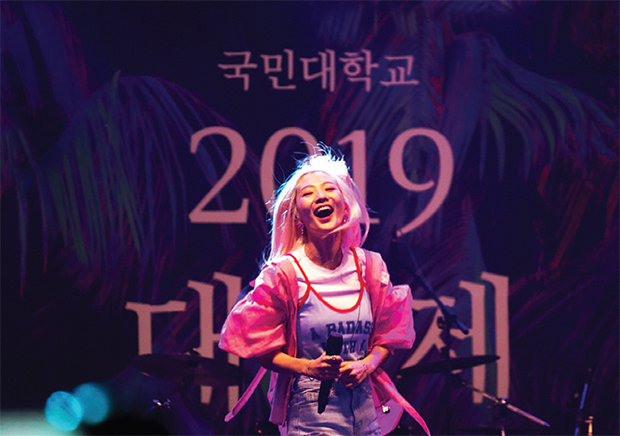 The 2019 Kookmin University (KMU) Festival was held for a total of four days, from May 14 to 17. Each college, department, club, and external organization helped prepare the event, with the student council planning everything, and each carried out programs with their own characteristics. Food trucks came in for four days, providing plenty of food, and there were celebrity and club performances for two days. For the other two days, seats were arranged for members of the university to enjoy drinking in a safe environment.

Since last year, students have been prohibited from selling alcohol or food during the festival, and this year, the university similarly offered limited amounts of free alcohol in addition to the food trucks that come from the outside. The festival showed a gradual change from former festivals. As an example, bars around performing zone immediately came to mind. Students are allowed to watch the singers’ performances first, by installing and managing the Kookmin Zone.

We conducted an interview with the president of the student council to learn more about the direction the KMU festival is going in, as well as how it has changed.

Lee Joon-bae, president of the student council, explained his planning intentions, saying: “At first, we planned for students who were exhausted from studying, making some diverse content, though not a food market. I thought it would be more desirable to have programs that have special characteristics for each college than to simply condone drinking culture, so I thought of a number of options ― such as a festival without entertainers and a festival without alcohol ― but I planned a festival with gradual changes because changing the frame of the existing university festival at once required sufficient discussion, which coincided with various domestic events at the beginning of the semester.”

The univeristy held a soccer league called “Bukak Cup,” put together by the KMU soccer team, and each department of fine arts sold artworks specific to their fields. Meanwhile, musical departments used their talents to busk and organize events inside the school. As in previous years, a club named “Kook Go Chu” sold merchandise related to the campus cats, and “Picture Love” painted henna. “Dado Club” sold iced tea.

A number of movies related to the independence movement to celebrate the centenary of the March 1 Independence Movement were also screened. Character-istics of KMU that are closely related to the independence movement were emphasized. It also provided a place for KMU students to enjoy and legally drink, keeping them away from prohibited bars. They also monitored lines for check corrupt acts to see singers for KMU students.

Kim Min-gun, a freshman majoring in advertis-ing and public relations, was worried about the festival when he heard that there was no pub. Yet it was a more enjoyable and beneficial time than he thought because there was plenty of food. “But I was sorry about amount of trash bins. It was insufficient compared to how many food booths there were,” he said. He was also concerned that “the festival would be all same like the other university’s one. And I’m worried that festival is equated as a celebrity’s short concert.”

He also said that, “except for the college of art and the college of design, the rest of the colleges didn’t have specialized programs. If these points are solved, maybe the festival will be more abundant.”

And a foreign exchange student Richelle, who studies in Visual Design, said, “The festival was fun. We don't have celebrations like this back at my home university in the United States, so it was interesting to observe and party with friends at the festival. As a student majoring in design, I thought it was cool how the students majoring in design were able to host their own party in the design building. I have never experienced post-midterm festivals before, so I have no complaints.”

Extracurricular Programs and Plus Alpha Program