Even though many people heard about starving children, the term “Starving College Students” would be unfamiliar to many people. According to a study conducted last year by Job Korea, 16.6% of university students answered that they have only one meal a day, and 42.3% of the university students responded that they could not have three meals a day due to financial burdens. They have to take care of their study and do the part-time job at the same time since there is not enough money left for them after paying for the living cost, tuition, and rental fee. The students understandably have to reduce their budget for their food expenses. Rather than well-balanced meals, they have to substitute their meal with snacks or skip their meal.

The United States is in the same situation as South Korea. Starving university students became one of the most pressing social issues in the United States since there is a strong correlation between academic performance and meals. According to an article published in The New York Times, 30% of community college students and 40% of four-year university students have unbalanced meal or skip their meals due to financial reasons, detrimental to both their health and study. In studies conducted in 2014 with 9 undergraduates departments in California University, 26% of students skip their meals “sometimes occasionally” to save their budgets. The result shows an increasing rate compared to the year 2010 which had 22% of students skipping meals. As a solution for starving university students, Spelman College and Morehouse College in Atlanta, Georgia provided 14,000 free lunches to students who are in needs, and other universities started to offer free meal tickets or food-scholarships. 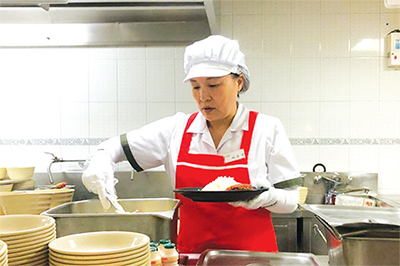 How can we solve the problem of an increasing number of starving university students?

The Lotte group initiated social contribution campaigns with an international relief organization. The campaigns are “Pleasure Box” and “Youth Lunch Box.” In the box, there are four lunch boxes, two Angel-in-us coffee coupons, two movie tickets, one pillow, and an aroma candle.

On our campus, there is a non-profit group called “Tenspoon” (Sipsi-Ilbap). University students voluntarily work during their free time between classes, receive meal tickets for the payment, and deliver the tickets to students who are in needs. By gathering one free hour each from ten students, one fellow student can reduce his or her burden for food expenses. The organization has a goal of enhancing the civic awareness of university students and helping to make a society that everyone blends in. The problems of university students can be solved by themselves. Once the organization is settled in 300 universities in South Korea, it will narrow the gap between the rich and poor on campus. The president of Kookmin University “Tenspoon” granted an interview.

1. How do you select the volunteers and beneficiaries?

We accept volunteers during the application period with a simple process. However, when we select beneficiaries, we sort them according to their income categories. Since there might be students in the dead zone of welfare, where students who are in urgent needs cannot receive the benefits, students can submit their essay describing their situations to us.

2. How many free meal tickets are produced in a month?

3. Do you have any memorable story of a Kookmin beneficiary?

Only one person in the team takes care of the personal information of beneficiaries. In order to keep the personal information private, we do not give the tickets in person. We send the tickets by post. Therefore, we cannot say a specific story about beneficiaries. But, there was a feedback from one Kookmin beneficiary. Before the help from “Tenspoons,” the recipient was not able to eat regularly due to financial problems. It was also challenging for the beneficiary to have a part-time job during semesters. Once Kookmin “Tenspoon” provides tickets, the recipient enjoys a much healthier and productive school life.

4.How many beneficiaries in Kookmin University?

For now, there are 16~17 beneficiaries on campus. When there were a lot of beneficiaries, we had more than 20 recipients. The maximum is 25.

With students on campus facing the danger of hunger, there are a lot of movements which try to solve the problem of Starving University students. In order to make a better society where the youth can expand their dreams, the government, corporations, and the university will have to try to find solutions.

A Brand-New Way to Reduce the Use of Plastics on Campus: 'Tenspoon' X '0 Tumbler'

What Are You Doing During This Winter Holiday?