During this summer vacation season, Bugak Hall has been newly renovated. It’s not only the change of external appearance – lots of benches and places to take a rest, but inside of Bugak Hall also had some noticeable changes. The 1st floor lobby received the most striking changes. Blue pallet walls, complicated pattern tiles and wider hallway are some of them. Because of this unexpected renovation, Kookminians are showing diverse reactions. To reduce Kookminians’ curiosities about Bugak Hall, Kookmin Review interviewed Professor Kai-chun Kim who conceived Bugak Hall’s new design.

Q. Could you introduce yourself before the interview?
A. Hi. I’m Kai-chun Kim. I am a professor of the Department of Spatial Design, and I have worked here for about 12 years. Now I give a lecture named ‘EMTeD’ for the school of Business Administration and the school of Advanced Materials Engineering students. It’s mainly conducted with these major students but other major students can also take this class if they want. I designed the conference hall of the Administration Building as well as Bugak Hall. The design was conceived about 10 years ago, but I think it still looks new. 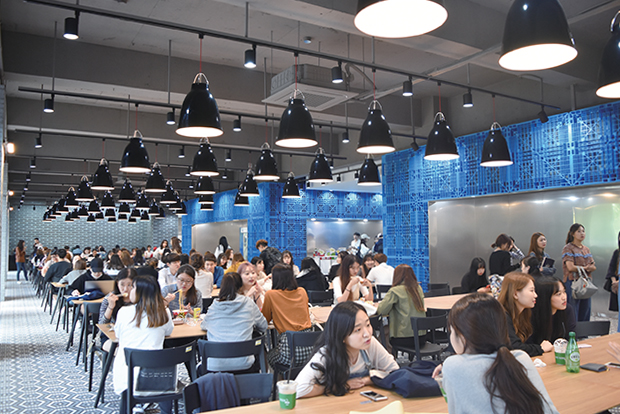 Q. What was the main concept of the new Bugak Hall?
A. Actually, I didn't have any main concept while I conceive this. I just tried to make the place better. A place where students can feel happy, have unfamiliar feelings and plenty of freedom and enticement is the dreamed atmosphere of this place. Especially, I wanted to highlight on ‘Unfamiliarity’ in this conception. It can become a good subject of conversation every time. So this is why I chose blue pallets as the wall material and patterned tiles as the floor material. I think Bugak Hall could get its own characteristic by this conception.
There’s no design for everyone. And it’s also impossible to accomplish that. I regard that harmony is valid when each thing has its own vitality. Having specialized vitality is more important than caring and consideration for others. It seems similar to a ‘Blue Nova’. I hope Bugak Hall also has its own vitality like a blue nova. So it can remain an independent atmosphere unlike other places on campus.

Q. Do you have any special reason for this new design conception?
A. If something is just normal, nobody gives any attention to it. Because of having its own vitality, a design will have an aura and let people notice it. Therefore, whether students’ reaction to Bugak Hall is positive or negative, it’s what I expected. And I think having an aura is a beautiful art form in modern art. So I wanted Bugak Hall to have an aura which makes other things around it seem gloomy.
In this regard, I used pallets for wall material. This pavilion’s actual use is a kind of means that lifts something up from the floor. However, in Bugak Hall, it is used for taking up walls and it is located in the air. In other words, it outdoes its original given role. But there’s no rule that everything has to stay in its own role. By this unique design, I wanted to stimulate students fixed ideas and make them get a wider insight to the world.
And also I considered economic conditions. Generally, the renovation costs of the campus are mostly made up from students’ tuition. So I didn’t want to spend that precious money carelessly. When I was conceiving this design, I used Google search. I tried to find good materials and designs that went with my thoughts. As a result, I found and chose the pallets. There were no pallets that are used for interiors as construction material. So it just fits with my intentions. They are cheap and good materials to make Bugak Hall’s own aura. I think, by using pallets on the walls, it gives a shape that has no shape and makes people think it’s adhering to them while watching outside through the holes. The pallet walls remain aloof themselves through their special color. And because people can see beyond the wall, they can feel like they have their own frame in there and they are in the ‘Imaginary world’. These are all that I wanted to express. 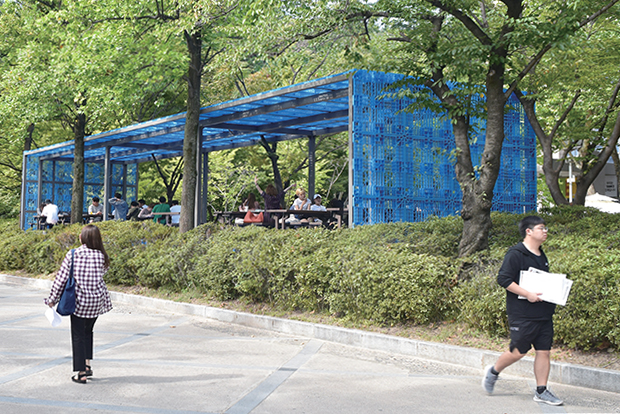 Q. Have you paid attention to the students’ reactions now?
A. I don't think I've really heard all the students’ reactions. But I've gotten some feedback from people around me. Someone said to me that it seems somewhat mismatched and disharmonious. I know it can be seen as weird to others but I am okay with it. As I said before, a design which considers all people doesn’t exist. Rather, I think sometimes a design that transcends time is attractive. Again, harmony to me means having its own vitality independently. And also another person said Bugak Hall is like having its shape without shape. I agree with that thought. The walls have their shape clearly, but exactly don't have shape. Seeing outside by lots of holes makes people inside feel like they are not in reality. 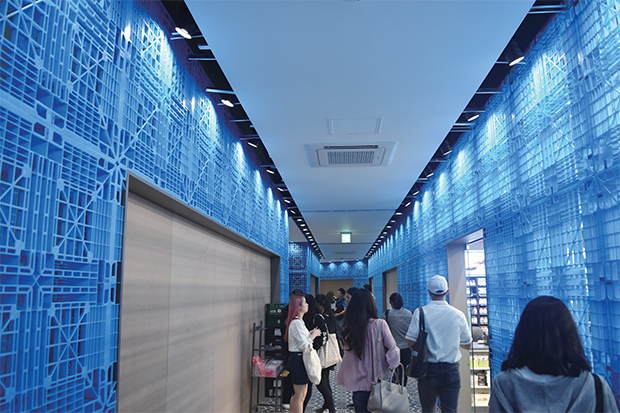 Q. What did you think about Bugak Hall before?
A. Actually I was required to renovate the design of the administration hall first. But the head director of Kookmin University recommended me to design Bugak hall. At that time, every time I saw Bugak Hall, I felt really sorry. So I totally agreed with that suggestion. It looked too narrow and old. Students studying there ordered delivery food to have a meal and also did their assignments in the lobby. I felt Bugak Hall has a great location in this campus but it was not being used. So I hope for Bugak Hall to become a campus-like campus and the place where study is a pleasant thing. And I also hope it gives intellectual curiosity, longing, dreams, power and pleasure to Kookminians.

Q. Do you know about the facilities and enterprises that will come in soon?
A. It is unclear until now. But we decided what kinds of food will be provided. They are: Burgers, pizza and lunch boxes. I’m sure franchises will take charge of that part. The definite result will be showed in October.