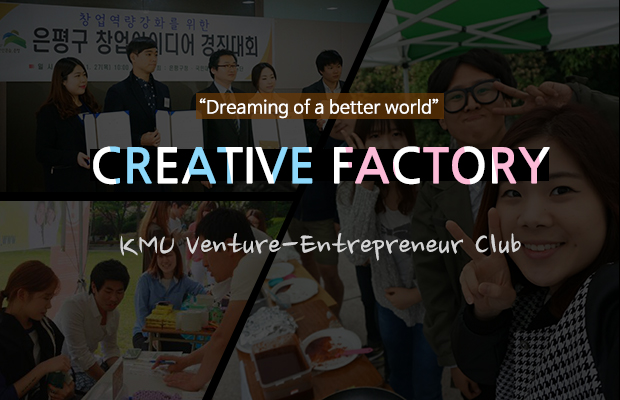 KMU’s only campus-wide venture club, Creative Factory is divided into the Venture Team and the Contest Team. The Venture Team participates in various business ventures and learns about business processes, while the Contest Team enters contests and competitions. In the process of pursuing these activities, the club focuses on building relationships among members and encouraging an entrepreneurial spirit. We met with the president of Creative Factory, Byungho Hwang, to learn more about the club. 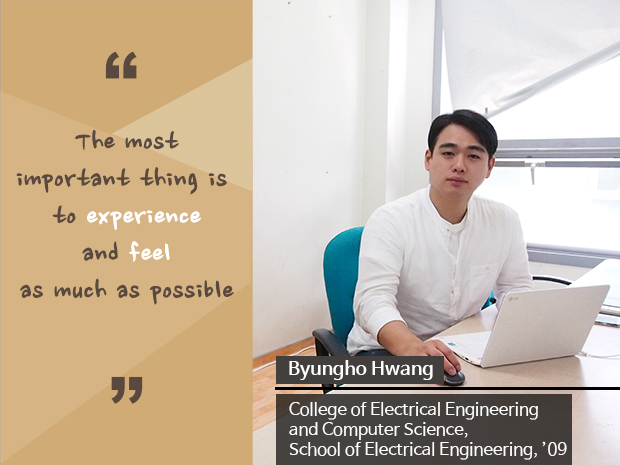 The History of Creative Factory

Professor Do-Hyeon Kim of the Graduate School of Business Administration and the current head of the Office of Entrepreneurship once asked during a class, “Why isn’t there a venture club here at KMU?” After hearing this question, the founding members of the Creative Factory decided to start their own venture club. That’s how the Creative Factory was born. Though it has a short history, the club’s members have worked hard, and, as a result, they can boast the following accomplishments. 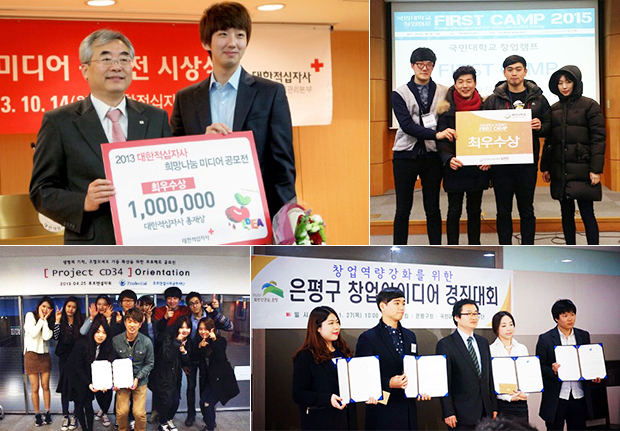 2010
Selected as part of the Start-up Incubator Program, received 50 million KRW as seed money, and launched first business
Won awards at 18 start-up related competitions on and off campus, including the KMU Venture Competition Grand Prize
Selected to participate in the Seoul City Challenge 1000, Youth Venture Project

2011
Won awards at 22 start-up related competitions on and off campus, including Best Idea at the National Business Presentation Contest
Selected for 3 support programs, including the Program to Support Venture Clubs at Leading Venture Colleges
Gained status as a KMU “semi-club”

2012
Operated New Business Exploration Competition on Afreeca TV
Won awards at 7 start-up related competitions on and off campus, including the SBA Venture Camp
Selected to participate in the Seoul City Challenge 1000, Youth Venture Project for a second time

2013
Won awards at 6 start-up related competitions on and off campus, including an award for excellence at the 2013 Korean Red Cross Sharing Hope Media Competition
Operated the 2013 Prudential Stem Cell Donation Project

2014
Won awards at 10 start-up related competitions on and off campus, co-hosted the Rocket Pitch with the Office of Entrepreneurship
Gained “official club” status at KMU

2015
Selected for 7 support programs including the 2015 Commercialization of a Business Item
Joined the Northeastern joint-campus club, NEO (Northeast Enterprise Organization)
Hosted and operated 4 events both on and off campus, including the first student-run “open market” on campus
Won awards at 12 start-up related competitions on and off campus, including a participation prize at the Gapyeong Venture Camp and the Grand Prize at the Jeju Venture Camp.

Last fall, a year ago, we were granted official club status, and we started our activities as an official club in the 2015 spring semester. When we were a semi-club, we didn’t have that many members, so we just made activity groups made up of members that liked each other’s ideas. As we grew and eventually gained official club status, we narrowed down our activity groups to 6, based on 6 core ideas. We now operate the KMU NAVI (KMU mobile app), “Meeting Meeting” (a business that makes a profit from matchmaking KMU male students with female students from other universities), “Photo Love” (short for “photographing love,” consists of a team that takes snapshots of dates), Love Letter (a team that relays messages of love like the “Cyrano Agency”), a team that mentors our venture sister school, Donggoo Marketing High School, and the Flea Market Team.

The Flea Market Team, which operates a student-led open marketplace on the school basketball court, held an event from May 6 to 8. For the event, it recruited students interested in selling at the open market and invited the Conservatory Band and street performers from the Hongdae area to perform. Creative Factory members learned a lot from organizing this event, and clothes and accessories that weren’t sold were donated to charity, along with the proceeds of the flea market.

Adding the Value of Sharing to Venture Activities

In 2013, we decided that we would continue our activities as usual except that our passion and experience would be directed toward righting some wrongs in society. As part of this new philosophy, we ran the Stem Cell Awareness Raising Campaign to help patients suffering from leukemia and other illnesses. Our aim was to help overcome society’s ignorance and structural problems surrounding stem cell use. Five universities (KMU, Hongik, Chung-Ang, Dongguk, and Seokyeong University) jointly held a donation drive and petitioned the Ministry of Health & Welfare. We gained 725 donation applications and 13,684 signatures. In addition, comedian Hyuk-pil Lim and cartoonists, movie producers, actors, and others donated their time and talent to make a promotional video to raise awareness. 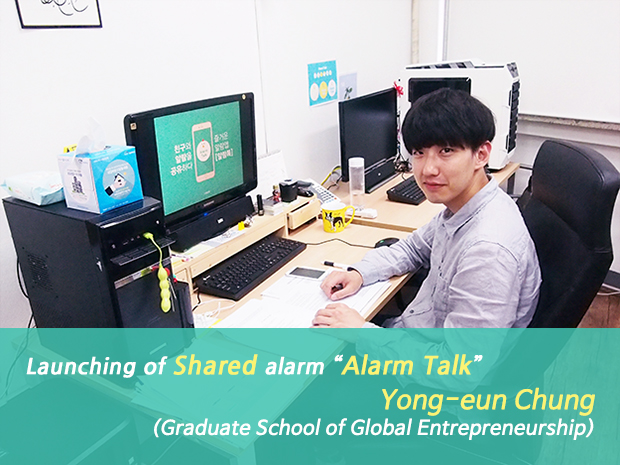 We met with one of the founding members of the Creative Factory, Yong-eun Chung, who graduated from the College of Natural Sciences, Department of Food and Nutrition (Class of ’05) this past February. He is currently enrolled in KMU’s Graduate School of Global Entrepreneurship.

Q. Please tell us about your start-up
I’m working on a mobile application service that lets you share alarms with your friends. An alarm, as we know, can lose its usefulness if not heard, or you can simply turn it off and go back to sleep. Alarm Talk let’s friends reactivate your alarm with the touch of a button. So, by adding a social factor to traditional wakeup alarms, we have solved a fundamental problem with alarms.
Of course, this isn’t my first business venture. My first business start-up was five years ago. I somehow ended up winning the grand prize in a venture competition less than a year after becoming a member of Creative Factory. I was able to start a business with the seed money and office space that came with the prize. So there we were, a bunch of us students who had no clue how to start a business gathered together to try and run a business. It was a great experience and showed me, “This is what it’s like to do something you love.” “It’s so much fun.” That was when I first realized the thrill of entrepreneurship.

Q. Was there a particular reason you started an alarm related venture?
I personally felt the need for it. I’ve often been late because I would turn off my alarm and go back to sleep, or wouldn’t hear it at all, and that meant I ended up in situations where my life was in danger. I really thought my friends were going to kill me! So in an effort to preserve my life, I would ask my friends to call me if there was something important I had to do and keep calling until I was fully awake. That was effective. But it became a burden to both me and the people responsible for waking me up. I didn’t like always having to ask for help, and I found my life was in danger again at the hands of those burdened with having to wake me up. So I started looking for services that would help others know whether I was awake or not and would allow them to help wake me up. When I couldn’t find any, I decided to make one myself.

Q. As someone who has already started a business, what would be the difference between what you thought of ventures as an undergraduate student and the real world of business?
Starting a business comes with enormous pain that you feel over and over, near-death experiences, shortened life span, and anxiety that makes you wake up in the middle of the night. I’ve seen a lot of my juniors prepare job applications, and with passion and effort like they have, that’s enough to be an entrepreneur. Who knows, you may be the next Steve Jobs.

Q. Did the Creative Factory’s activities from your undergraduate days help in your business venture?
I was one of the first members of Creative Factory. In other words, the members we had back then had to start everything from scratch and learn as we went along. Starting a business is also like making something from nothing. So for me, participating in Creative Factory didn’t give me any particular business skill, but it did become the foundation for all of my entrepreneurial efforts.

Q. What would you like to tell students attending Kookmin and preparing their own ventures?
Feel free to come buy me a meal if you meet with difficulties, as I’m doing way worse! I’m kidding (laughs). If you have a good idea, don’t hide it, talk about it. There are lots of people who are afraid that their ideas will be stolen. But I think the feedback and advice you get when you actually talk about an idea is the key to getting one step closer to success. It is especially helpful if you find someone who failed at launching a service similar to what you have in mind. Make a point to talk to them and learn all you can. If you don’t know of anyone, search. That’s one of the best ways to save time. We spend half our lives working, and I want to support my juniors spending time doing what they’re really passionate about.

It’s possible to work with the Office of Entrepreneurship to launch your business, but joining KMU’s venture club Creative Factory is a great opportunity to grow among like-minded people. If you are a Kookmin*people who wants to learn what entrepreneurship is all about, stop by the Student Union, Room 212.