Kookmin University’s School of Architecture holds an exhibit at DDP! 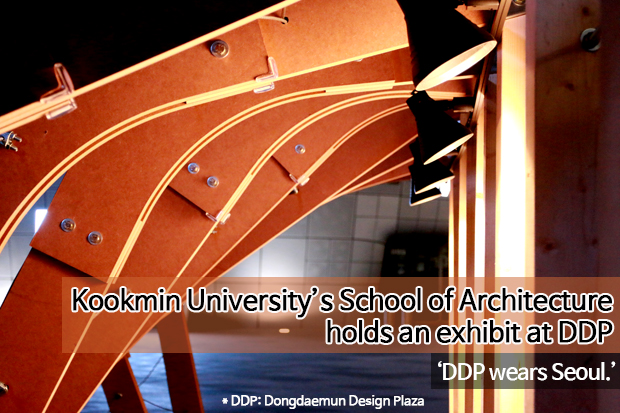 Dongdaemun Design Plaza (DDP) is the place where artworks from various areas are displayed together. Accordingly, students from various universities including Kookmin University exhibited their architecture design works at DDP. This exhibit, which welcomed its 4th event this year, was held with the theme ‘DDP Wears Seoul’ and was hosted by ‘Organization of Architecture Universities in Seoul’. The festival was held in the month of May. Let’s take a peek at the event that provided the opportunity of seeing cutting-edge architecture and arts. 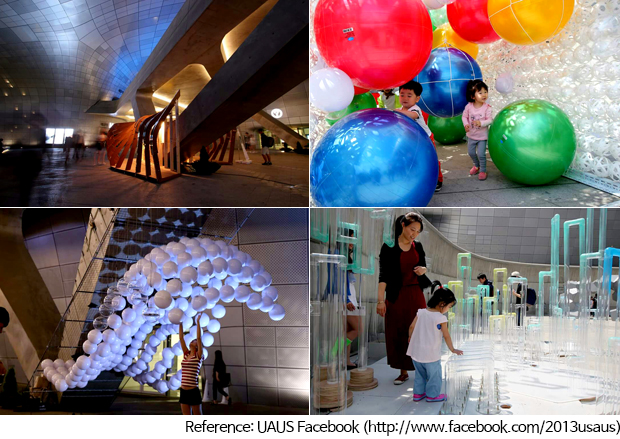 This exhibition was held from May 23rd to 31st. With the theme ‘DDP Wears Seoul,’ the regional characteristics of Seoul were considered as design elements. The image of ‘indiscriminate development’ was also incorporated to exhibit a creative pavilion. Since the admission was free and it was an outdoor exhibition, the event presented a good opportunity for relaxation and enjoyment of visitors and citizens while introducing the identity of Seoul. In this exhibition, 300 architecture students from a total of 19 universities participated. To have a closer look at the site, we held an interview with the team manager of Kookmin University Team.

(*Pavilion: It indicates outcome of a produced artwork.) 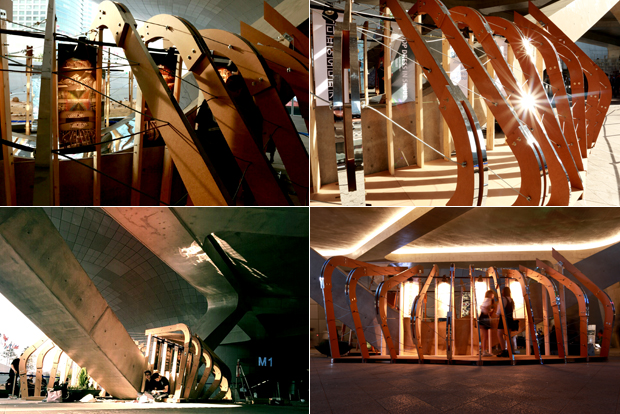 Q. Which pavilion was made by Kookmin University?
The pavilion that we made was the architectural conceptualization of Cheonggyecheon Stream that is part of Seoul’s history. Cheonggyecheon transformed into different looks depending on citizens’ demand that existed under the stream in the past; however through a restoration project, Cheonggyecheon returned to the citizens again. Currently, Cheonggyecheon is being recognized as a new recreation area within the busy city. We intended to make people appreciate the unique look of Cheonggyecheon for their benefit. 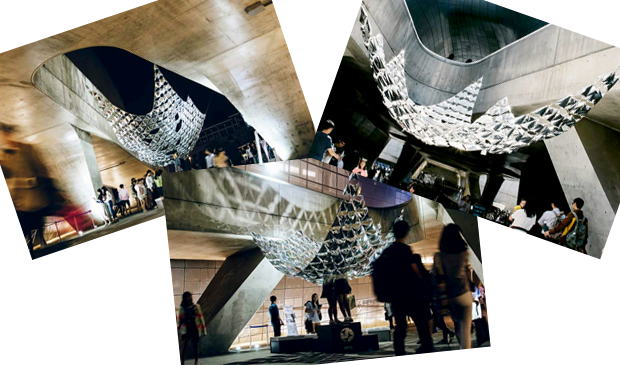 Q. It seems that many universities participated in this event. What was the most impressive work made by other universities?
The pavilion of Hanyang University was the most impressive. Before installing each pavilion, a specific location was assigned for each participating university. Most universities including us installed the pavilion on the bottom of the assigned space. But in the case of Hanyang University, their pavilion was installed not on the bottom, but they floated it on the air. I felt that they researched really hard about the materials and construction method for their pavilion. 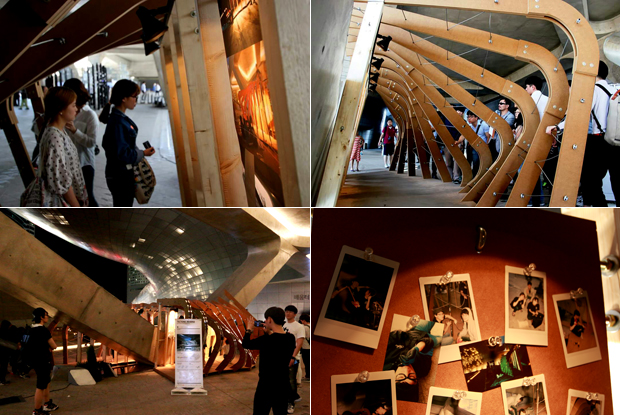 Q. What was your most rewarding experience at DDP?
I felt great when I saw many visitors in the event. It was a great experience to show the pavilion we made not only to Seoul citizens but also to foreign tourists. During the exhibition period, detailed information about each university was placed next the pavilions and visitors read the information sheet in order to understand our work. I really felt great when they understood the efforts we have made for this project. 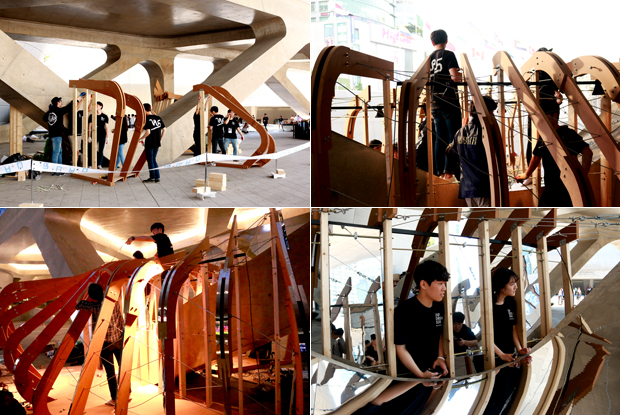 ▲ The students are working on structures.

Q. What have you learned from this exhibition?
In the university, we always produce our work through a model. But this time, we produced the actual size of the structure. While working on the structure, we experienced challenges that we were only able to realize during the real production process. We learned so much through actual experiences and figured out ways to solve some issues. The most important lesson was knowing the difference between theoretical model and actual/real production. I also realized that it was difficult to understand architecture only through the experiences we have inside the university. 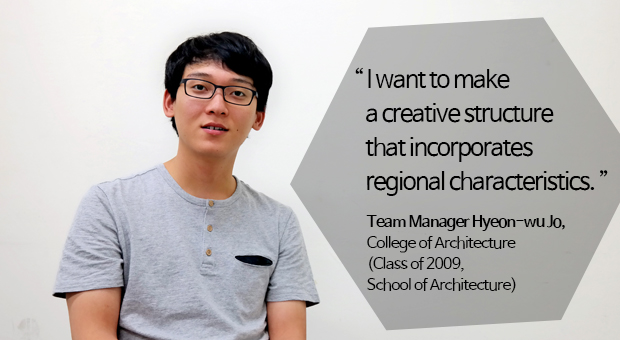 Q. What kind of structure do you intend to build?
Since I am a student who is still learning about architecture, I study the works of world-renowned architecture masters. But I think the environment faced by each community or society is more diversified and complicated. Thus, it is important to have a concept of general architecture but it is more important to consider locally-customized architecture. Since architecture is being considered as an art, I want to design unique but more practical architecture. 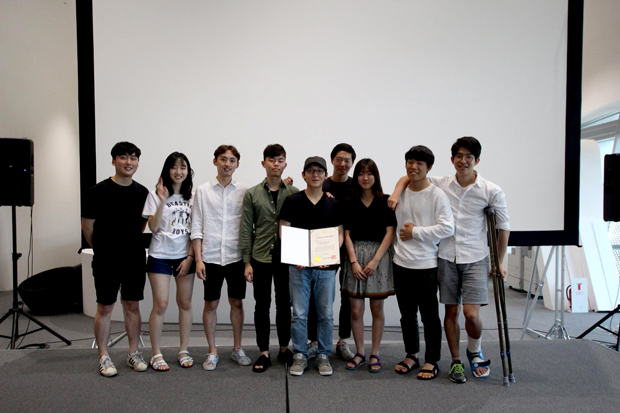 Q. I know that you received the Excellent Prize in this event. What are your thoughts about this?
We previously received awards when we participated in this event last year, but it feels really good to receive another award this year. I think that this award is more meaningful since we received this award on Memorial Day. Through this event, we could learn many things beyond what we learn from the university so I hope that the College of Architecture at Kookmin University would consistently perform well and reap awards. For their cooperation, I would like to thank my team members: Sun-jin Kim/Hye-seong Ryu (09); Mun Park/Mun-gyu Jeong/Jong-gil Jeon (10); Jong-hyeok Sin/Dong-gyun Ha (11); Ye-won Yi (13); Yun-seun Kim/Ha-eun Kim/Jeong-ho Park (14); and Yeon-jin Kim/Seung-muk Kim (15). Next year, I hope that we can create another pavilion that many people can appreciate.