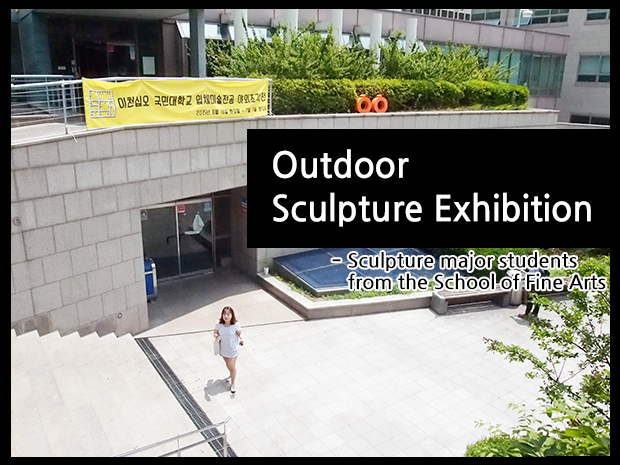 The vicinity of the College of Arts building was splendidly decorated with various three-dimensional artworks. These artworks were made by the Sculpture major students from the School of Fine Arts. The outdoor sculpture exhibition was held from June 16th (Tue.) until July 7th (Tue.). Although each artwork looked distinctive, there was one thing they shared in common - the theme of ‘departure from me.’ What does this mean? Let’s listen to the stories of the academic advisor and students majoring in Sculpture. 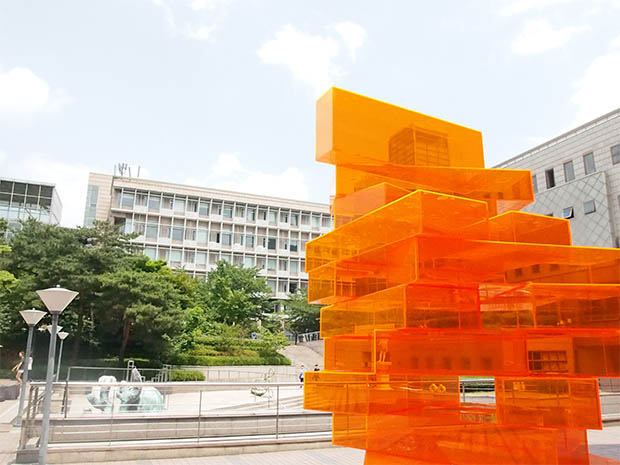 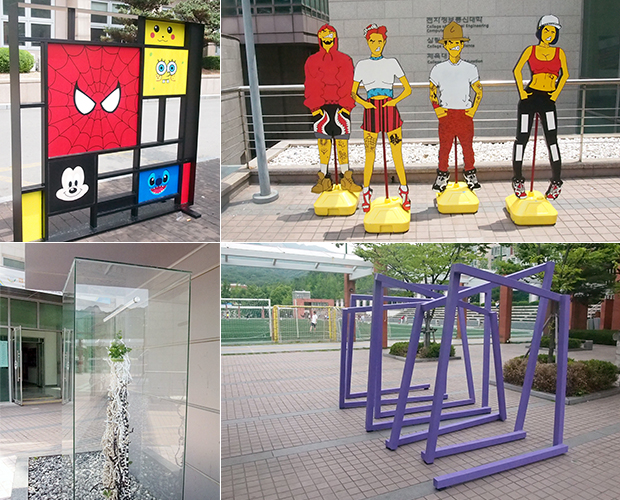 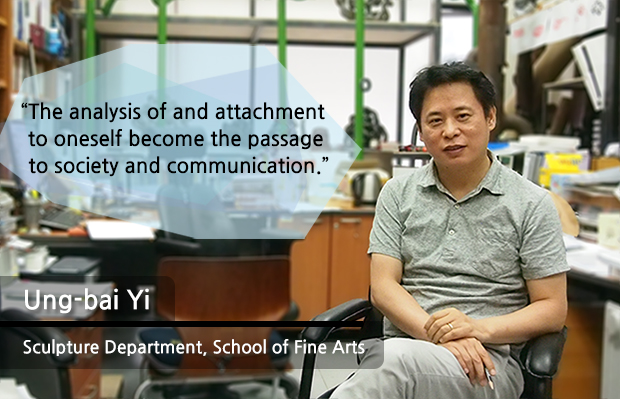 Q. What is the purpose of the Sculpture course?
The conventional way of enjoying arts is visiting art museums or galleries, where artworks are displayed indoors. On the other hand, another way of exhibiting artworks is by displaying them outdoors for a more dramatic impact and better communication with the audience. This method of displaying artworks outdoors is known as public arts and this is a public arts class. Outdoor sculptures are meant to be displayed in wide open spaces.
There are certain procedures and structures in the field of arts. First of all, a theme must be set and it is recommended that this should strictly come from oneself. It should not be something heard from somewhere or should not be the things considered important among people or society. It should be the thing that is most precious to the artist such as a good memory, painful experience, or a very significant event. Whatever it is, the starting point must come from oneself based on personal experience. The theme may be very subjective but it should be objectively expressed. This course intends to educate the students on how to develop completely subjective stories in order to objectively express the arts.

Q. Is there any message that you would like to impart to the students?
The initial goal of our Sculpture course major is to produce a true artist. It takes time to be a part of society as an accomplished artist and to become financially successful. Accordingly, the young people of today do not want to become artists after graduation because of financial difficulties. Since an artwork is not sold immediately after its completion, many artists experience financial difficulty. For this reason, many people in the art circle give up their art.
Other course majors in humanities, in general, do not require any particular preparation for university entrance. But the students studying arts have considerable major-related investments and experiences when they attend university after graduating from high school. As an academic advisor, I feel sorry when students give up arts for other practical careers. In case of seniors for example, there are many students who have studied not only three years of academics in the university, but have already spent five to six years or more than seven years in total of studying arts. They quit studying arts because they cannot see their future with art-related careers and I feel really sorry about this. There are many students with great potential but they do not realize the treasure that they already have. For the rest of the semester, I hope that many students will change their direction into arts by training and developing the valuable skills that they have within themselves. 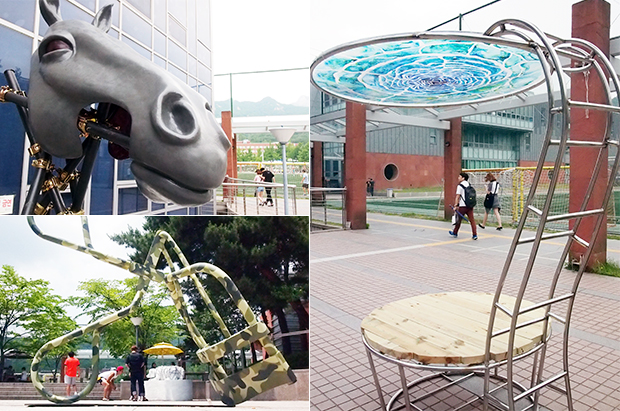 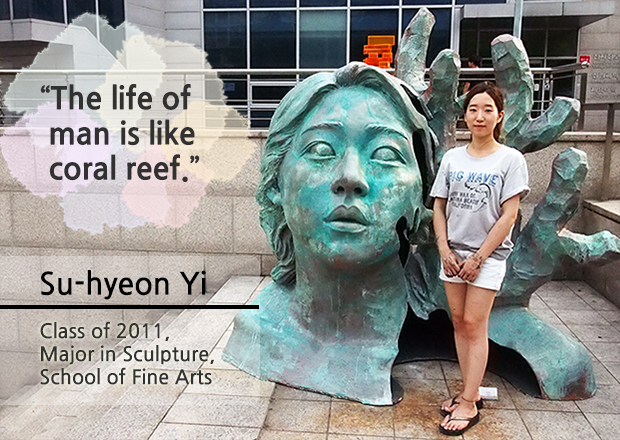 Q. What was the process involved in creating the artworks?
I started the creative process by writing about myself. The professor asked us to write down our own thoughts, experiences, and the objects that surrounded us. I wrote about my past experiences and my output was about 20 pages. Then, from my writing, I chose the things that I wanted to develop further. It was really difficult to express myself through arts. Meanwhile, I thought, ‘There is no perfect man and a human’s life is incomplete.’ Everyone tries to be prefect but this is impossible to accomplish. Life makes us experience pain and this was the idea that I developed. The lives of men are beautiful and these are like the corals in the sea. (Is there any relationship between life and the coral?) There is no perfectly-shaped coral and they look unique and different from each other. There is also no standard of which is better than others. In this context, I thought that men’s lives are similar to that of corals. The way the coral looks is like a tunnel or maze that man must go through.

▲ On the right side of the head, there is a hole in the shape of a coral reef and it is vacant inside.

Q. It is impressive to see the vacant space inside the head.
Initially, I wanted to make coral-shaped paths by using metal. But the professor advised me to develop the idea by using a human body since I can make it so well. So I made a human head. Inside the head, there was a tunnel similar to a coral. I wanted to visually express the idea that a human’s life is like a coral but it was not as beautiful as I intended. So I thought of drawing a coral but I realized that it would not be interesting. Hence, I just expressed my idea dimensionally. I also considered the effect when coral was projected and the holes could be seen similar to the coral’s shape.

Q. Is there anything you’d like to say to your juniors?
I advise them not to work with polycoat. I used polycoat since it was the only material that could produce the shape and size that I wanted to make. But it produces a substance that is harmful to the body. Also, I really like the writing process about oneself. It is a good practice to spend time and reflect about who I really am. I think that an artwork expressing how one thinks is the best artwork. It is most important to contemplate on one’s self-examination, how to express it, and how to share and communicate my ideas with others. 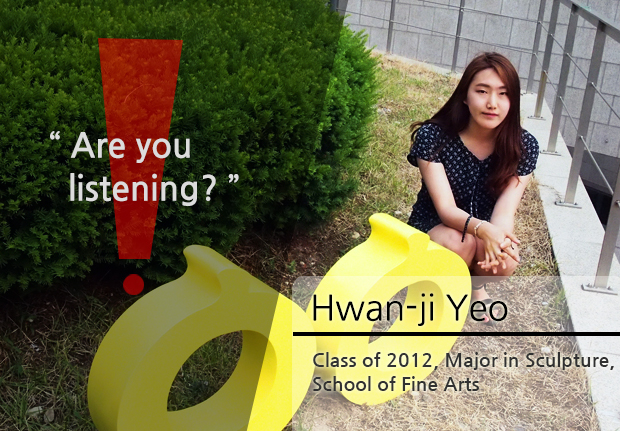 Q. Your works are very unique. What does ‘ㅇㅇ’ mean?
The title of this artwork is ‘Are you listening?’ The people of today do not listen carefully to what other people are saying during a conversation. They just respond with a simple ‘OK’ or ‘Yeah.’ People often use ‘ㅇㅇ (Ung which means ok in Korean)’ to respond immediately in conversations. This artwork was conceptualized to criticize such insincere and condescending attitude. I made a total of five kinds of this artwork and placed each one in different locations. (Why did you put them in different locations?) It is my way of responding as ‘I will overuse such expression just like you did.’ ‘ㅇㅇ’ is everywhere as if I overuse it. 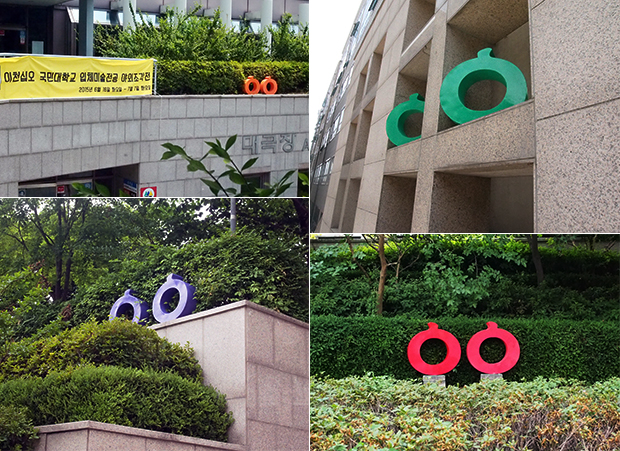 ▲ The artworks of Hwan-ji Yeo are placed around the College of Arts building.

Q. The florescent color of the artworks is very visible. Why?
There are two reasons why I used the florescent color. First, my work was not as big as other works so I wanted them to be visible. Second, the color was related to the leaflets on the street. Colorful leaflets are handed out and are thrown out on the street without being seen. They may be seen later on but eventually, they become meaningless. Likewise, ‘ㅇㅇ’ is an answer but it does not have much meaning to people. In this regard, I connected my artwork with a leaflet on the street and expressed it in florescent color.

Q. What is your impression of the outdoor sculpture exhibition?
As soon as the new semester started, I already set the theme and drew every week. It took me over three months to complete my work. I planned to make seven artworks at the beginning but it took me a much longer time and the work was hard. So I reduced the number of artworks I created. It would be nice if I was able to produce the artwork as I planned but it was impossible because of time constraint. The paint I used for my work was specifically made for automobiles so it is not good for health. I suffered from rashes while painting my artworks. Since it may be my last opportunity to hold an outdoor exhibition, I invested so much money and exerted my utmost effort. Thankfully, I was rewarded with the people’s positive response to my work. I also felt great about finishing my work.

Kookmin University’s School of Architecture holds an exhibit at DDP!