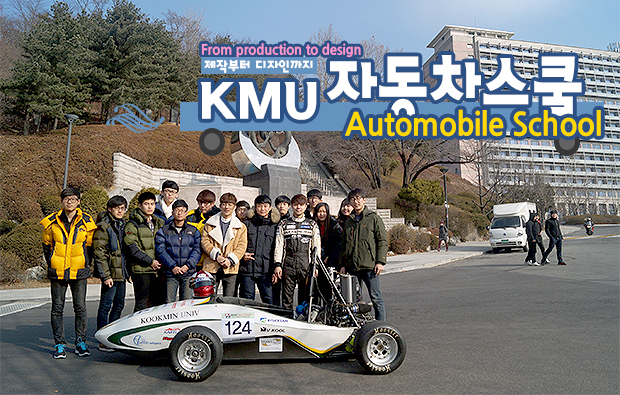 From January 5th to 9th, the KMU Automobile School that was supervised by the College of Automotive Engineering in Kookmin University was held for high school students. This program not only offered professors’ lecture on basic education on engineering and automobile to the students who are highly interested in automobile but it also delivered dynamic professional knowledge on automobile through the disassembly and assembly of a real car, practice on production process, automobile modeling, and experience of an electric car, RC car, and motor sports. Based on its unique and solid curriculum, the Automobile School has been held for three times. Let’s take a look at the 5 days of this program.

On the first day, a lecture on the basics of engineering is provided by Professor Sung-hwa Shin of the Department of Automotive Engineering after the orientation on the overall program schedule. In the lecture, dynamics was classified into thermodynamics, solid mechanics, dynamics, and hydrodynamics to easily explain about the details. The students seemed confused about the unfamiliar subjects at the beginning but soon they were able to focus on the lecture. It was valuable time to catch a glimpse on the students’ interest in engineering.

After the lecture on the basics of engineering, Professor Seong-uk Lee of the Department of Automotive Engineering provided a lecture on the introduction of automobile engineering. The lecture was mainly about the engine, chassis, and car body that were the basic elements of a vehicle and detailed explanation on the roles of each element, contained parts, and characteristics was provided. The students who had been interested in cars carefully listened to the lecture. 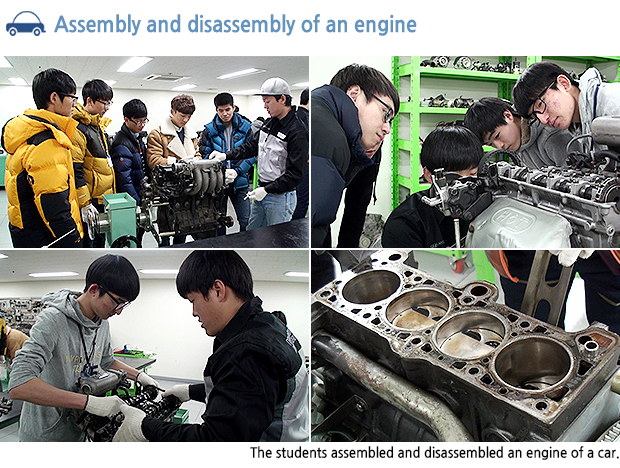 On the second day, the program that assembled and disassembled an engine used for a real car was promoted. Being led by a teaching assistant, the students carefully disassembled parts while learning the names and function of each part that were theoretically learned at the lecture on the basic education on engineering. The students were able to witness the real shape of each vehicle part. After the disassembly, all parts were aligned and assembled again and through such process, the students were able to perfectly learn about an engine.

Following the disassembly and disassembly of an engine, the students visited the facilities of the College of Automotive Engineering in Kookmin University. While visiting the research institute for about 1 hour under the guidance of the accompanying teaching assistants, the experiment equipment and purpose of devices were explained. Also, information about an automobile produced by KORA, a small automobile group of Kookmin University, was provided to help the students broaden their knowledge about vehicles. 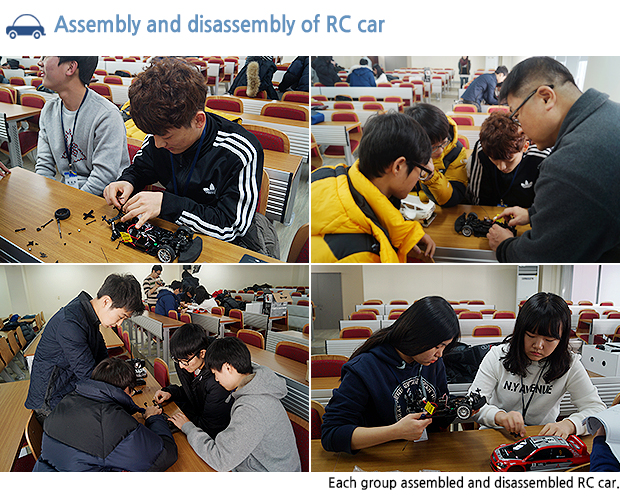 On the third day, a lecture on an electric car and RC car was provided by Professor Ung-cheol Choi and then the practice on the assembly and disassembly of RC car was promoted. RC car refers to ‘Radio-Controlled Car’ and unlike a common toy car, the interior of RC car is quite similar to that of a real car. It is possible to promote elaborate proportional control and drift by controlling and that is the reason why it has been a popular hobby among many people. In the course of disassembly and assembly, the students were able to understand the function of parts as well as the structure of a real car through the instruction of the teaching assistants and professor. 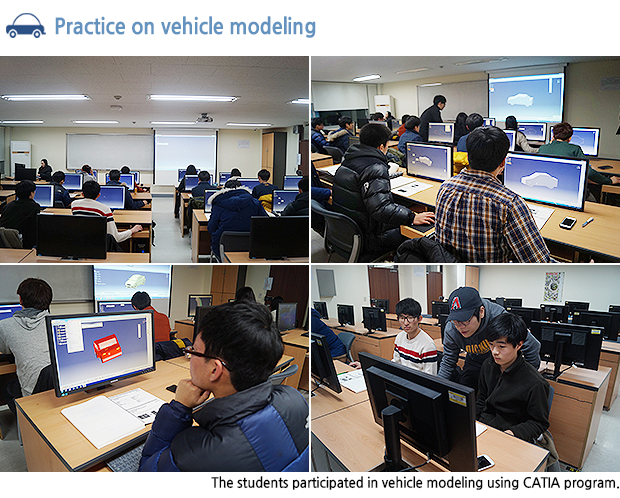 On the fourth day, practice on vehicle modeling in use of CATIA program was promoted after the lecture of Professor Sang-heon Lee on vehicle design and production. CATIA is a 3D modeling program for vehicle and it is used in many motor companies in the industry. It is one of the programs promoted for the current students in the Department of Automotive Engineering of Kookmin University. While learning about the program step by step, the students experienced how a vehicle was designed and produced in the course of its introduction to the market. 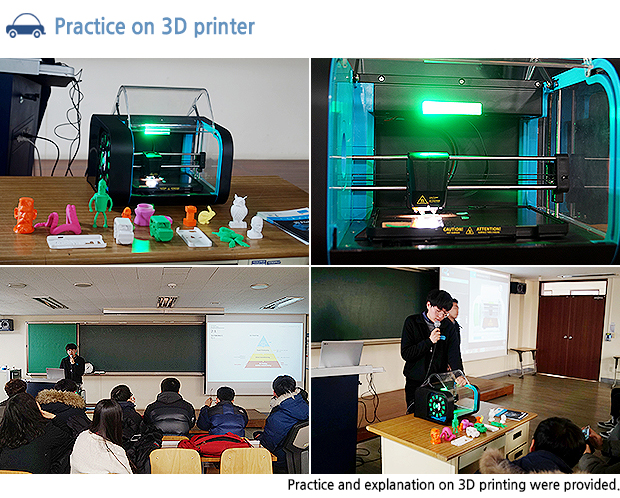 After vehicle modeling in use of CATIA, the lecture and practice on 3D printing were provided. Drawing attention as one of the next-generation production technologies, 3D printing technology is understood as an innovative means not only for car production but also for the production of all vehicles through the additive manufacturing method, which is different from mere cutting. Prior to the practice, basic information including the principles of 3D printer, benefit of manufacturing process, and overseas application, and market prospect were explained while showing the operation of a 3D printer.

On the fifth day, the lecture on motor sports and driving demonstration by car racer Dong-eun Kim who was a student of Department of Automotive Engineering in Kookmin University were provided. In this lecture, Kim introduced the origin of motor sports and game method while showing how to wear the protective gear used for a real race. The students who were very interested in motor sports asked a lot of questions even after the lecture.

After the lecture, driving demonstration was briefly shown. While seeing the course of wearing the protective gear as explained in the previous lecture, students nodded their heads in approval and after about 10 minutes of preparation, the driving demonstration started. The car raced inside the university, generating a roaring sound, and the students exclaimed when the speed was suddenly raised. 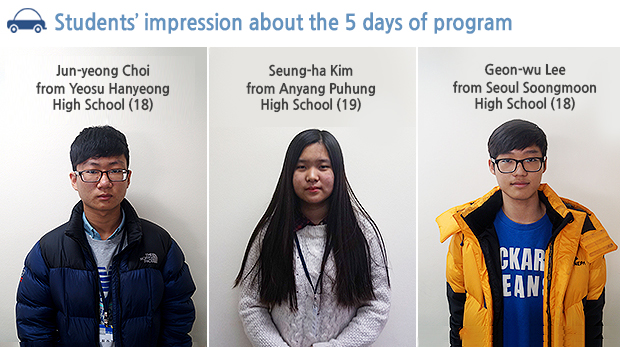 Q What is your reason for participating in the Automobile School?
(Jun-yeong) I like the automobile-related program so I often search for the programs and cars that I like. While reading the newspaper, I saw an ad about the Automobile School of Kookmin University and I told my parents that I want to participate in this program.

(Geon-wu) I vaguely wondered what would be learned in the Department of Automotive Engineering and what would be the future career related to the major. Meanwhile, I saw the announcement in the school and learned about the Automobile School. I then asked the teacher about the program so that I can participate.

Q What is most impressive about this program?
(Jun-yeong) Oil, which is a limited resource, is becoming an international issue nowadays so the lecture that dealt with hybrid car or fuel cells as the solution for oil shortage was impressive. Also, 3D printing was very impressive.

(Seung-ha) CATIA program that was provided in the fourth day was most impressive. I saw my father using this program before and I thought I would like to try it once. When I actually used it, I found out that it was fun and interesting.

(Geon-wu) The lecture on the principle of an engine was provided with video and through this, I was able to have a glance on every element of an engine. It helped me when disassembling and assembling an engine.

It is not easy to select a major only through the academic knowledge of high school before entering the university. Because of this, there are many university students who are wondering what to actually study after entering the university and those who try to find the path they want and re-enter the university with a new major. From such perspective, the program like the Automobile School is very meaningful. As if the light glowing amidst the fog, such program helps students to have practical and actual thinking about their future. Of course, there are more to be done besides choosing a major. However if there is a shortcut, there is no reason to detour. So why don’t you participate in the program?

KPA, the genuine Korean beer that was brewed with the dreams and passion of two young men, hit…