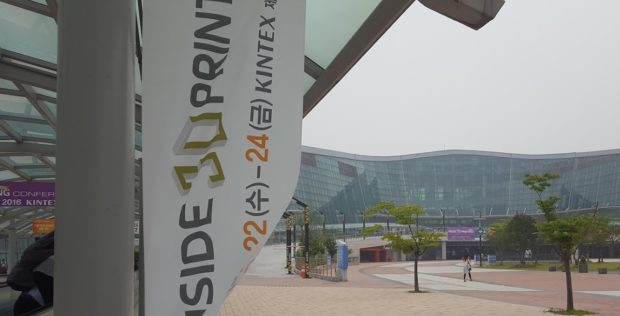 The Inside 3D Printing Conference & Expo Seoul opened at the expansive Kintex Convention Center in downtown Seoul, South Korea yesterday. Being this was to be the third annual incarnation of this event, and the first two had been so different from one another, we weren’t really sure what to expect. We arrived early and things looked like they were off to a bit of a slow start, no lines, no crowded registration desk, plenty of parking. To be fair, it was early, and Korean events don’t usually get cranking until at least 10am. By that time, things were looking like they should as people began to arrive in mass. 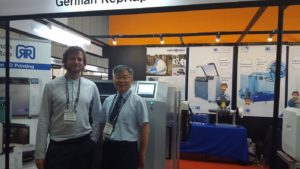 The first exhibitor we met upon entering the exhibit hall was Raphael Rieffel, Sales Manager for German RepRap. He took several minutes to explain the selection of machines his team had brought, from their desktop models all the way up to their large industrial models. Little did we expect that the large machine he was showing us would turn out to be one of the more moderately sized large machines of the expo. He said they were enjoying the show as they had been getting a lot of traffic. Probably didn’t hurt that their booth was right near the hall entrance.
The next exhibitor we visited was Rokit, which is Korea’s largest domestic 3D printing manufacturer. Their booth was a very hard to ignore bright orange, stocked complete with a selection of their very newest machines…and machines unlike what we were accustomed to seeing. While Rokit’s very first offering back in 2012/2013 was a Koreanized version of the MakerBot Replicator 2, called the 3dison+, they have moved far, far beyond those early days. 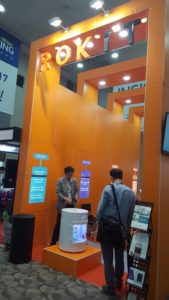 Though Rokit now has an extensive line of machines, at this show they were only showing off their newest; the Invivo bioprinter and the Stealth multi-filament printer. The Invivo is an interesting machine, larger than a typical desktop printer, but more designed for a research lab than an office. Being aimed at the professional research market, the machine should allow smaller firms and labs to conduct research programs that were once only possible at larger firms and universities. The machine itself is designed to allow the printing of both “hard” and “soft” biomaterials by utilizing two different kinds of extruders among its features.
Rokit’s other machine, the multi-filament Stealth, seemed a little more familiar. This amazing printer is distinguished by two main characteristics. First is its multi-filament capability wherein it is able to use three separate filaments that feed into a single extruder. These are melted and blended together, or not, and extruded through a single nozzle. This gives the printer the ability to print in a single color, a mix of 2 colors, a mix of 3 colors, or even of using different types of plastics at the same time. The second is that it comes in a variety of sizes, from a reasonably “normal” desktop size all the way up to one that is as big as a washing machine! 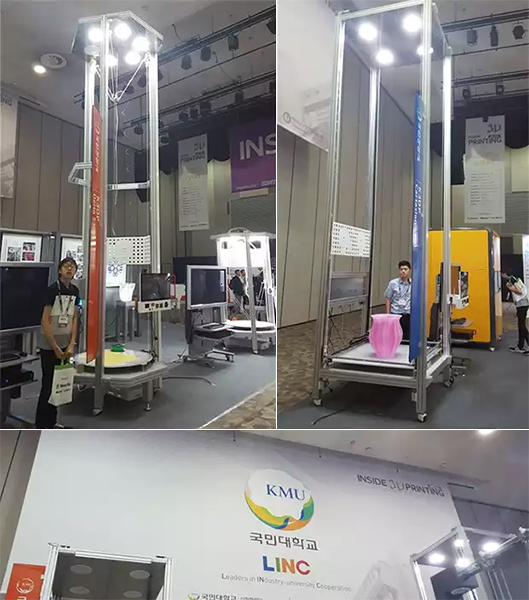 By this time we started noticing that most of the serious players all had big machines on display, and big definitely seemed like a reoccurring theme. This become obvious when we stumbled over to an expansive setup put on by Kookmin University. Dr. JungSik Jang, a professor of industrial design, was the director of the project and walked us through and around his machines…which felt a little like walking through a forest of extruded aluminum trees. These were no ordinary FDM printers, with some standing 5 or 6 meters high with printbeds of 1 meter square. Forget the 15cm action figures, with these printers you could make them life sized! Dr. Jang said that his project was adding to Korea’s understanding of the industrial applications of 3D printing, and was generating a lot of excitement among his students.
We continued to wander around the hall running into the HyVision, Anatz, AM Solutions, and Carima booths, which all had amazing setups. We finally found our way over to the Owl Works 3D booth and got to catch up with their CEO SJ Park. Owl Works 3D makes the amazing Morpheus LCD/LED liquid resin printer that caused quite a ruckus when it was first introduced several months ago. He told us that he was now working with a company called MedicalIP which takes patient CTs, MRIs, and other scan data and turns it into 3D models for diagnostic purposes. He also hinted that we keep our eyes peeled for a new printer project that they plan on launching on Kickstarter in the near future. If history is any indication, this is a company to watch carefully.

Finally our day finished with an interview with MakerBot’s CEO Jonathan Jaglom who was in town as one of the event’s keynote speakers. About half a dozen of Korean based reporters met with Mr. Jaglom in a VIP lounge and took turns asking about MakerBot’s plans here in East Asia. According to the MakerBot boss, his company wants to expand its market share in Korea, even though it faces serious competition from several strong domestic manufacturers. Surprisingly, he insisted that he is not intimidated by competition, as MakerBot is not a hardware company. He specifically spoke about the expansion of both its Thingiverse and Thingiversity platforms, and its continued dedication to further research and development to make its printers safer and easier to use. He also pointed out that some recent studies have indicated that there are some serious potential health hazards associated with the use of consumer grade printers, and noted that the issue is definitely “on our radar.” 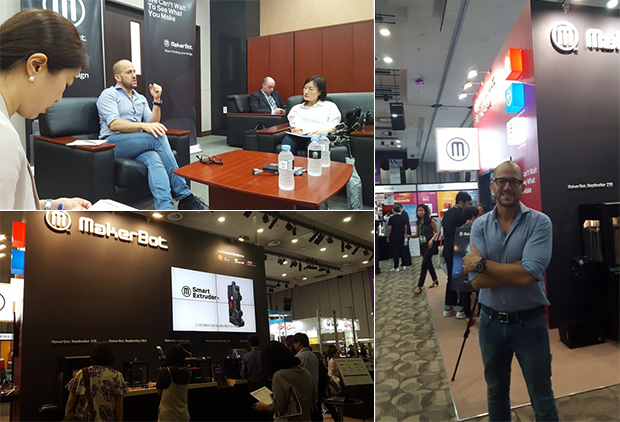 All in all, the conference was very well attended and a lot of fun, although it seemed a bit smaller than past events and there was a distinct lack of “makers” as most event booths were occupied by established businesses. On the other hand, it was exciting to see more and more large scale printers being displayed, as well as several exciting new players that we had not seen before. Wish we could have stayed around for the rest of the show…well, maybe next year.

[All photos taken by Mark Lee on-site at Inside 3D Printing Seoul for 3DPrint.com]