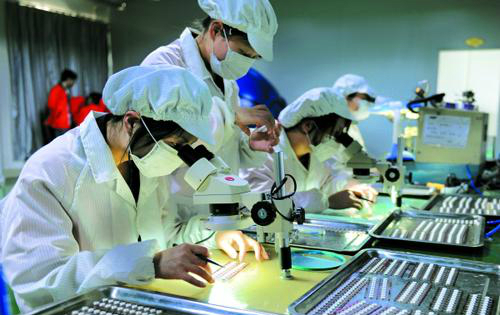 China is believed to have adopted the “trading market for technology” (shichang huan jishu) strategy in the early days of the reform and open door policy. This strategy’s main objective was to allow foreign companies that were willing to introduce new technologies to access the Chinese domestic market.

However, Chinese decision makers have become skeptical regarding the effectiveness of the aforementioned strategy. The reason for such skepticism is that new technologies will cross the national border when they are brought into Chinese territory but may not cross the organizational border of multinational corporations (MNCs). These new technologies may be confined in the branches of MNCs in China and not be shared with local Chinese partners. This limitation is not only attributed to the technology defense of MNCs but also to the inability of local Chinese firms to absorb new technologies.

The aforementioned phenomenon causes the GDP-type evaluation of technological achievement in China (i.e. summation of technological activities occurring within China’s national borders) to exceed a GNP-type evaluation (i.e. summation of activities performed by local Chinese agencies). Hence, China may appear strong from a macro perspective but not from a micro one. Accordingly, over the last decade the government has attempted to fill this gap.

This technological gap has been narrowed through a series of measures initiated by the Chinese government, public research institutes, and individual Chinese firms. China is transitioning towards a knowledge-based economy, thereby mitigating its notoriety for producing low-quality and fake products. Note that the word “innovation” has also surfaced as a new norm in China.

Moreover, China has also transformed into a scientific powerhouse. China is currently second to the US in terms of the number of scientific research papers published in Science Citation Index Expanded journals, which are generally accepted as major scholarly journals in the science and engineering (S&E) fields. According to my own calculation, which is based on the Web of Science online database, approximately 26.5 percent and 15.2 percent of all 1,123,396 journal articles published across all the S&E fields in 2012 were authored by researchers from the US and China, respectively. These two countries were followed by the traditional scientific powerhouses, such as Germany, Japan, the UK, and France, which accounted for 7.2 percent, 6.4 percent, 6.1 percent, and 5.1 percent, respectively, of these articles.

The recent decelerating economic growth rate of China has driven people to discuss the possibility that this country may fall into the “middle income trap.” This concept is a hypothetical claim that a country, upon attaining a certain growth level, will be stuck at this level and will not experience further growth. Typical examples of this trap include Southeast Asian and Latin American countries that spend little on their R&D and rely heavily on cheap labor, land, and natural resources. However, China is an entirely different case. This country has begun to maximize the deployment of its brain power intensively to transition into a knowledge-based economy with extensive R&D investments.

The science and technology catch-up of China has imposed additional competitive pressure on the forerunners in these fields. For example, South Korea often frets about such challenges despite having the world’s second highest R&D expenditure/GDP ratio (4.21 percent) in 2015. With its enhanced technological capabilities, China seems to have resolved to become the number one producer of intermediate goods, including LCD panels and semiconductors, which South Korea has hitherto massively exported to China.

It is the right time to re-think the concept of innovation. This concept does not simply refer to new ideas or inventions. Innovation is a circular chain of “demand identification–ideation–implementation,” in which each stage interacts with the upstream and downstream stages. Technology may have important roles within the chain (particularly in the implementation stage) but still remains just a component of the entire chain. Therefore, innovation pursuers not only compete with one another for further scientific knowledge and technological capabilities. Non-S&T factors might matter more.

For many countries, how to include China in their innovation networks has become an issue of strategic importance.

The innovation chain may be activated through a creative ideation of solutions for existing problems or unsatisfied demands; such ideation does not necessarily stem from hard science and technology. Given that emotional, aesthetic, and design factors have attained considerable roles in the process, we must embrace the concept of “soft innovation,” which may account for a critical role in the future innovation landscape. In contrast with hard innovation that depends on the best solution and the “survival of the fittest” principle, soft innovation provides a substantially larger space for the co-existence of different solutions, thereby promoting collaboration among different actors.

Furthermore, the innovation chain is increasingly formed across national boundaries to create a “global innovation chain” (GIC) or “global innovation network” (GIN). Therefore, one important question is who (or which country) can control the GIC, and to what extent. With the world’s largest domestic markets in an increasing number of sectors, and with enhanced manufacturing capabilities supported by recently intensified scientific research and industrial R&D, China has a good chance to become an important, if not dominant, player in the GIC.

Actually, China has provided a platform on which innovation aspirants from within and without this country can fulfill their dreams. One can imagine the so-called “China-based innovation,” the salient features of which include low-cost, large scale production, and rapid adoption of brand new technologies.

Given the dual evolution of China and GIC, for many countries, how to include China in their innovation networks has become an issue of strategic importance. This issue is particularly true for China’s regional neighbors, such as South Korea, Singapore, and Taiwan. My recent exploratory research of international scientific research collaboration (Eun, 2015) revealed several interesting features of the innovation network in this region.

Singapore has strengthened its collaborative research linkage to China more rapidly than the other two “little dragons” (i.e., South Korea and Taiwan). However, Singapore is agile enough to strike a balance by maintaining a strong research collaboration network with traditional Western collaborators and Japan. Therefore, Singapore may be in a good position to bridge the Western and Chinese knowledge sources and maximize the opportunities that emerge around its boundaries.

South Korea has been relatively slow (among the Little Dragons) in accepting China as a key scientific collaborator. However, there is a growing similarity in the scientific research portfolios between these two countries. Coupled with the relatively inactive direct linkage, the recent trend intensifies the competitive pressure from China upon South Korea. Simultaneously, however, the growing similarity in the scientific knowledge base might open up a new possibility of a broader collaboration between these two countries. Thus, South Korea might need a strategic readjustment in choosing partners in scientific research and industrialization of the research results to realize the potential.

Taiwan, although its scientific research portfolio is more distinctive than other two Little Dragons, seems to have fallen under a structural framework in which China can wield a strong influence. Taiwan appears to have a balanced international research collaboration network, yet China has moved to a structurally important position in that network, according to my network analysis mentioned above. Under such significant direct and indirect influences from China, Taiwan might need to find a way of utilizing this structural proximity in favor of its economic growth and innovation.

The aforementioned international scientific research collaboration networks, which are mainly formed among the scientific researchers in the big and little dragons, cannot describe the entire innovation network in East Asia. This complex network comprises various linkages not only among homogenous but also among heterogeneous agencies (e.g. science & industry, industry & society). Therefore, we need further investigation to have a clearer understanding of the regional innovation network emerging in East Asia. However, it is highly probable that the dragons’ habitat is vibrating partially unnoticed with the innovation-centered dynamism although the macro economy is suffering from a lack of global demand and a decreasing rate of growth.