[A creative man is the new power of the future.] Professor Ho-seob Yun, ‘the green designer’

‘The earth loving’ natural design that leads to eco-friendly life 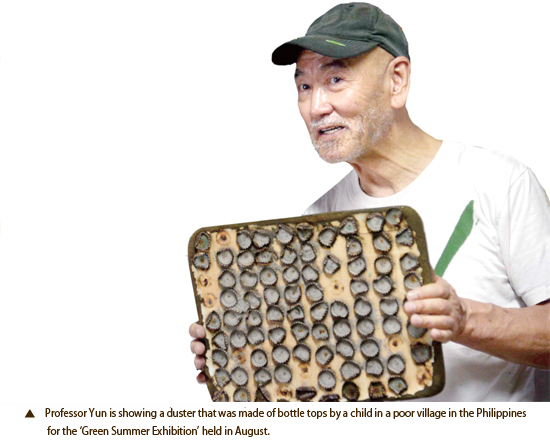 There is an old man of seventy years. He collects things that are considered as garbage and turns them into useful items such as bag and seat cushion. He gave up using a refrigerator that is the source of energy waste and food trash. He writes his name using vegetable ink whenever handing out his business card. This special person is the emeritus professor Ho-seob Yun of Kookmin University who opened up the new horizon in the visual art industry in Korea.

He was a ‘hot’ advertiser in a renowned advertising company in Korea. As member of the Design Committee in Seoul Olympic Games in 1988, he managed design for important domestic and overseas events. The Korean logo of City Bank and Pepsi are two of his works.

In the university, he opened a course called ‘green design (environment design)’ for the first time in Korea and established a new genre as a green designer while fostering young students. However, Professor Yun is more famous as an old man who draws pictures on a t-shirt in Insa-dong. We met Professor Yun at his workroom that may seem to be a storage room yet it has the sense of a treasure ship surrounded by green leaves.

- It is ironic that your career shifted from being a competent advertiser who led consumption culture into a green designer who pursues harmonization of design and environment. What is the reason for such change?
I studied commercial art. When I was a student, it was important to be a famous and competent designer who could afford to eat and live without a problem. I worked on how to produce and consume a lot through design. In the middle of such process, I witnessed the negative effects including resource depletion, waste generation, and excessive competition.

About the time when I was very much concerned about environment-related issue, I met a Japanese college student who wanted to get an autograph in the 17th Jamboree held in 1991. This student asked about the environmental issues in Korea. I wondered why she asked this question; however, I am still seeking the answer to this question until today.

- As a designer who pursues ‘earth-saving design,’ your earth-saving practice such as removing a refrigerator has become an issue. Since it is not an easy task, is there any easier approach to practice the earth-saving way?
In the middle of the IMF crisis, I thought ‘we spend money wastefully’ so I called a family meeting. At first, we decided to save 1/3 from what we ate, wore, and lived. Then at the nuclear crisis at the Fukushima plant in Japan, we reduced what we consumed to 1/2. Recently, we are trying hard to reduce what we spend towards 1/n. The ‘n’ in the denominator is used to denote any number you can think of.

At first, I suggest not to use a refrigerator for three days. If such approach is difficult, I ask to unplug it for 15 minutes during peak hours. By doing so, we don’t need an additional nuclear power plant. It is better to unplug it than experiencing a situation of not having a power resource. I encourage the rich people to take the initiative for this movement. The discomfort of not having an air-conditioner and the discomfort of not using an air-conditioner are two different things.

- I keep in mind using a fan instead of an air-conditioner. I think you have a different idea about a nuclear power plant.
(Indicating a poster on the wall) It is the photo composed of radioactive mark and sonogram of a fetus. The number indicated next to a country is the number of its nuclear power plants and under the mark, there is an expression by the fetus. ‘Was the nuclear power plant the only solution at that time?’ Actually, this question is inevitable.

As we use energy and build a nuclear power plant today, such fetus may or may not be born. Therefore, we have to think seriously for the generations to come. It is inevitable to have an accident as all of them are done by humans. Therefore, it is the best to remove the source of such accident. 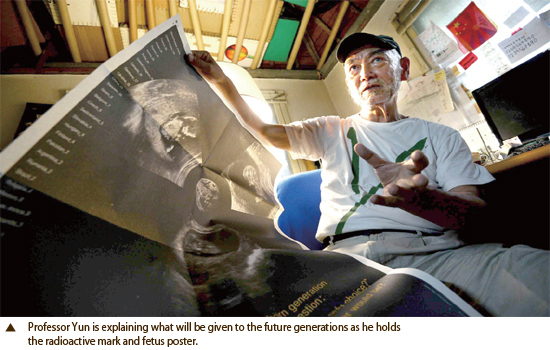 - You have been acknowledged for your efforts in fostering juniors and students for green design.
My coffee cup is made of cornstarch and it won the grand slam in three world design awards for the first time in Korea. It is done by my students. It is very rewarding but what moved me the most were the letters that I get every morning. One letter is from a middle school student from an alternative school in Gwangmyeong City as he wants to spend a one-day, two-night trip with me. Who would ever want to spend some time with an old man like me? The other letter is from a student and he wrote the content of ‘A Man Planting A Tree.’ I promised to draw leaves as many as the number of his family if he writes the book so he sent this letter again. This book has the answer to the situation faced by mankind today. I am deeply moved by such students.

- We do worthy exhibition in August called Green Summer Exhibition.

It is the 6th exhibition this time and the major artwork asks to compare one duster made by a child in a poor village and another duster bought for 60 thousand won in Korea. When you see the duster that is made of a waste wooden board by nailing bottle tops, you will be shocked not only by its design but also by its approach in recycling ordinary items. It will be an artwork that asks us to change our awareness in order to coexist in the same earth.

- I wonder how you derive your unique understanding and creative ideas throughout such long period of time.
The word ‘creation’ should not be used and is not necessary. As all things around us were already created way before we exist, why should we use such word? It is like adding the adjective ‘clear’ in front of clear water. If we pursue imitation and opportunity, we are dictated to use the word ‘creation’ and through this word, we want to be competitive. It is a disappointing phenomenon.

The same can be applied to the way of coming up with an idea. Look around you. If we care, there are so many things waving at us to get our attention. Consistent thinking is linked to an idea and once we tune into it, our reality changes. Ultimately, creation is derived from good thinking.

---------------------------------
Professor Ho-seob Yun is …
Professor Yun who dreamt of becoming a cartoonist or architect graduated from Applied Art of Seoul National University. After his graduation, he started his career in the Advertisement Planning Department in the United Press (current Oricom) as an advertisement designer and art director. While working as a professor of Visual Art in the College of Design from 1982, he served as a member of the Design Committee in Seoul Olympic Games in 1988.