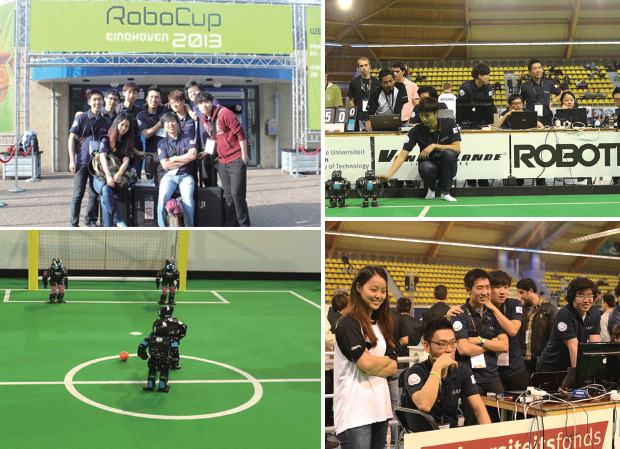 KUDOS, the robot club in Kookmin University, realized brilliant achievement by advancing to the top 16 participants in the RoboCup for the first time in Korea.

RoboCup is an annual event for the robot enthusiasts worldwide. Aiming at ‘evolution of a robot,’ it intends to produce an outstanding robot soccer team that can defeat the World Cup winners in 2050.

Under the supervision of Professor Jo, eight students majoring in different fields are the members of a robot soccer club (KUDOS) formed in January 2013 to participate in the RoboCup humanoid kid-size league. Since the achievement was realized through their dedicated efforts amidst the hectic lecture schedule and assignments, their advancement to the top 16 is more meaningful.

Reflecting their personalities, the members of KUDOS were highly motivated by their great passion towards this event, saying that it was a valuable experience in developing excellent teamwork that can strongly unite the members as one.

[A creative man is the new power of the future.] Professor Ho-seob Yun, ‘the green designer’