Focus on Leatning no Grades 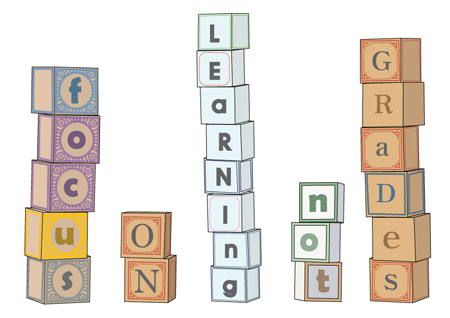 Are you stressed out about your test scores? Does receiving any grade less than an A+ cause you to cry and be depressed for days? Then you’re probably too obsessed with grades. This may sound odd coming from a professor, but I think it is true. As a teacher, I sometimes regret that I have to give grades at all. The highest goal of a liberal education should be learning, not receiving the highest score possible. Of course, grading is part of the reality of modern university life in Korea, but for many students, it is more of a hindrance than a help.

Because of this, a number of foreign universities have even stopped giving grades to their students or have deemphasized the importance of grading. Rather than letter grades, they propose using so-called “narrative evaluations” that describe a student’s performance without assigning a specific number or letter grade.

The modern system of grading is a relatively recent invention. It is believed to have first been implemented at Cambridge University in 1792. Before that, teachers and students got along just fine without grades. None of the famous teachers of antiquity gave grades to their students. For example, Jesus did not give grades to his disciples; neither did Plato in his famous Academy, and yet their pupils still managed to learn and receive a quality of education that is arguably far beyond modern schools today.

I will always remember the grading policy of my Latin professor when I was a university student. On the first day, he told the class that every student would receive a grade of no lower than a B minus, as long as the student came to class regularly. This is a rather radical grading policy for sure, but now that I am a teacher myself, I understand why he had this policy. It allowed students to focus on learning without worrying about their grade.

Far too many students are only concerned about the grade that they will receive on their report card, but do not make an effort to learn. It is possible to go through years of formal education and get high grades but not retain any information. This happens when a student focuses too much on test taking and views learning as merely a regurgitation of a professor’s lectures. When students do this, they may have a high GPA, but they are really depriving themselves of knowledge and wisdom that is useful in real life.

How can students more effectively learn? First of all, I would encourage you, as a student, to take the onus of education upon yourself. There is a sense in which all learning is personal-- no one can force you to learn. No matter how good your professors are, they cannot make you learn anything if you make no effort. You must have a strong desire to learn or the education process will suffer. This involves more than memorizing. You need to understand the subject and develop your own opinions.

So if you are in a class that you are not particularly interested in, what should you do? Take a moment to reflect upon the subject and put it into a greater context. It may not seem relevant to you right now, but it may be something that will greatly benefit you in the future. As a former student, I can tell you that there are many classes that I wish I had taken more seriously.

For example, when I was in high school, I took two years of Spanish. At the time, I had little interest in the subject. Living in the midwestern United States, there were few Spanish speakers to converse with, and I had no plans to visit any foreign countries. However, several years later, I had the opportunity to visit Spain. Though I had scored well on my Spanish exams, I did not really make an effort to use the information that I had studied. So when I attempted to speak the local language, Spanish people could not understand what I was saying. It was quite an embarrassing situation. If I had known the usefulness of my Spanish studies when I was a high school student, I would have made more effort to learn the language, rather than merely attempting to achieve a good score on the examinations.

The same is often true of my students in Korea. They give great attention to achieving a certain grade in the class, but then give very little effort at learning how to actually speak English. So I would encourage each one of you to view your education as something more than a number on a paper. This is your education. Don’t waste it!

Polanyi in Davos: For Whom the Bell Tolls?