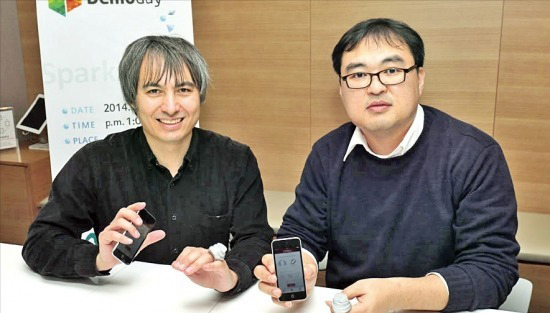 There is a moment when saying ‘I love you’ is not enough. That’s why there is a proverb ‘Out of sight, out of mind.’ Professor Yong-sun Choi of the Department of Art & Technology in the School of Integrated Knowledge of Sogang University – also a graduate of the Department of Fashion Design / class of 1996 – said, “According to the facts revealed by scholars, 60% of non-verbal means is used when conveying the thoughts and feelings of people.” Last October, he established a British corporation Feel-U, which develops wearable devices, together with Professor Adrian David Cheok who was an academic advisor in his graduate year.
We met Professor Cheok who is the CEO of Feel-U like Professor Choi at ‘the 3rd SparkLabs’ Demoday’ that was held at Olleh Square in Gwanghwamun, Seoul. It is the place where a ring-type wearable device called ‘Ring U’ was first introduced after completing its sample.
They said, “Ring U, the ring on your finger, is a product that conveys emotions through light and vibration to the ring of another person in a remote place by simply pressing it” and emphasizes, “Beyond the limits of writing and words, it will serve as a momentum to enable better communication.” It intends to be released in the market within this year.

Convey your mind to the one you love with a ring
The sample of Ring U looks like a candy ‘jewel ring’ that was once popular among children as it contains LED (light emitting diode) for lighting, motor for vibration, and electronic parts for various information processing as well as connectivity to smartphone and Bluetooth. Professor Cheok said, “Of course, it won’t be introduced in the market as it looks now” and added, “We are still working to reduce the size and improve its design.”
Its operation method is simple. Once the ring is pressed, its signal is transferred and through the internet, it connects to the smartphone of a person far away. Then through the ring, light and vibration appear. Professor Choi explained, “During, my doctorate, I studied ‘Huggy Pajama’ that delivered the feeling of hugging a doll through the pajama of a person sitting far away. This idea was applied into a small ring.”
Is it possible to transfer indefinable sensations of a man through mere light and vibration? He emphasized, “The intensity of the light and vibration shown in the other person’s ring is designed to vary but it is true that such technology is at the beginning stage” and added, “However since it is possible for me to know the other person’s thought and feeling in real-time, it still is worth trying.”
If a ring blinks red when working or studying, it means that someone is thinking of me. Professor Choi added, “Regarding the color expression and emotional relationship, the other members of Feel-U are conducting further research.”

Specialization in Seoul, London, and Tokyo
The members of Feel-U are scattered in Seoul, London, and Tokyo. As Professor Cheok moved from National University of Singapore to Keio University in Japan and then to City University in London, his students got scattered as well. Professor Choi who majored Fashion Design in Kookmin University first met Professor Cheok when his ‘Mixed Reality Lab’ was in Singapore in 2007. As Professor Cheok and his lab moved to Keio University, Professor Choi moved to Keio University for his doctorate course. This ‘Mixed Reality Lab’ is famous as the company that developed the taste and flavor transferring technology through a smartphone.
Professor Choi said, “Design is developed in Seoul while managing the hardware in London and software in Tokyo” and explained, “We process our project through a video conference once every two weeks.” Currently, we are busy searching for a factory that can manufacture our product. Including Foxconn, we are discussing with Taiwanese, Chinese, and Japanese businesses.
He said, “I used to focus on research and now I started a business. I realized that operating a business and manufacturing a product is a big deal” and added, “I hope Feel-U will become a leading business in the world when it comes to wearable devices that deliver non-verbal sensation.”

Graduate students in the School of Advanced Materials Engineering, awarded an honorable prize