Popjussi’s Burst of Cheers in an Art Museum

One day, artist Yeon-Doo Jung, a professor in the Department of Visual Communication Design, came across Crayon Pop’s guerrilla concert while he was passing through City Hall. What he found interesting was a group of male fans aged 30 to 40 who were cheering for Crayon Pop enthusiastically. Unlike other K-Pop girl groups, Crayon Pop wears training gear and helmets and jump until they sweat. Behind them, Popjussi, these male fans aged 30 to 40, were supporting them by wearing sweat suits and helmets just like Crayon Pop. “Why did they become ardent fans?” A curiosity and fascination with Popjussi was born and became the artwork「Crayon Pop Special」(2014). At Plateau, the Samsung Museum of Art, Popjussi danced and rooted for Crayon Pop as if they were at the concert. Their performance was captured by Yeon-Doo Jung’s camera. It is displayed on the white wall in the museum now. Alongside their performance, a big empty stage with flashy lighting is ready for Crayon Pop’s appearance.「Crayon Pop Special」portrays ordinary middle aged men’s passion for their life and their stars.

Professor Yeon-Doo Jung, an acclaimed worldwide artist, is holding his solo show entitled《Spectacle in Perspective》running until 8 June at Plateau, Samsung Museum of Art. It is his first solo exhibition in his home country in 6 years after he was selected as the Artist of the Year by the National Museum of Modern and Contemporary Art in Korea, 2007. Being considered one of the most important Korean contemporary artists, he has exhibited his works in some prestigious places like the Museum of Modern Art, New York. This exhibition follows Jung’s artworks from his early photography works「Hero」(1998),「Evergreen Tower」 (2001) to his recent media and performance works「Vergil’s Path」(2014) and「Crayon Pop Special」 (2014).

As you walk into the museum, you might wonder “where are the artworks?” since there’s nothing but Rodin’s sculptures such as「The Gates of Hell」 and「The Burghers of Calais」. However, when you use a 3D device ‘Oculus Rift’, Jung’s new media work,「Vergil’s Path」, can be seen. All the people in,「The Gates of Hell」 and「The Burghers of Calais」 turn into real people. For this work, he made the models pose in the same body posture as the people in Rodin’s「The Gates of Hell」. He drew and took photos of all 246 poses, and converted them into “alive” graphic sculptures. While he was staying in Japan, he met a masseur who was visually impaired. The masseur’s hobby is taking photos. He documents his daily life capturing sounds and feelings on film even though he can’t see the world. The encounter with the masseur made Jung think about “what we see”, and he began his work「Vergil’s Path」.

In his dark room, his early photography works 「Hero」(1998) and「Evergreen Tower」(2001) are displayed.「Hero」depicts a boy riding a motorcycle at high speed like a “hero” in the movies. However, when you take a closer look, you realize that he is a delivery boy wearing fake Adidas shoes. Yeon-Doo Jung portrays the boy’s innermost desire to be a hero while riding a motorcycle and his tough attitude full of confidence.「Evergreen Tower」is also an interesting piece. 32 families are standing in a living room and posing for the camera. As they live in the same apartment, ‘Evergreen Tower’, the house structure is the same but each family reflects individual style. Viewers can feel the joy of ‘peeping’ into somebody else’s house.

The event “Plateau’s Slow Postbox” is the one that you should not miss in this exhibition, too. Interested in dreams, fantasies, the memories of ordinary people; Yeon-Doo Jung continuously works on the theme of dreams, and brings imagination to reality. For this exhibition, he positioned the postbox so that viewers receive the postcards written by themselves after one year. They write what they hope from “myself in the future” on the postcards, and the museum sends the letters one year later.

“For me, art is a way to communicate with people, and artists are people who pose questions to society” said Yeon-Doo Jung, when asked what is art to him.

“As for my life working as a professor and artist at the same time, it isn’t hard at all. I don’t think of teaching and art as separate. They are both embracive experiences. I like meeting students the most. My art is based on meeting people and the energy from interaction,” added Jung.

“People go to art museums to see what artists see in the world: the artist’s perspective. It’s like a ‘window’. I can see his warm attachment to life and world through his ‘window’,” said Jung’s colleague. Like his colleague mentioned, artist Yeon-Doo Jung explores the world with his warm attention and draws attention to ordinary people’s dreams.
The exhibition runs until 8 June. Admission is 3,000 won for adults. Hours are 10a.m to 6p.m. Tuesdays to Sundays. Go to City Hall station, line No. 1 or 2, exit No.8 and walk for 5 minutes. For more information, visit www.plateau.or.kr or call 1577-7595. 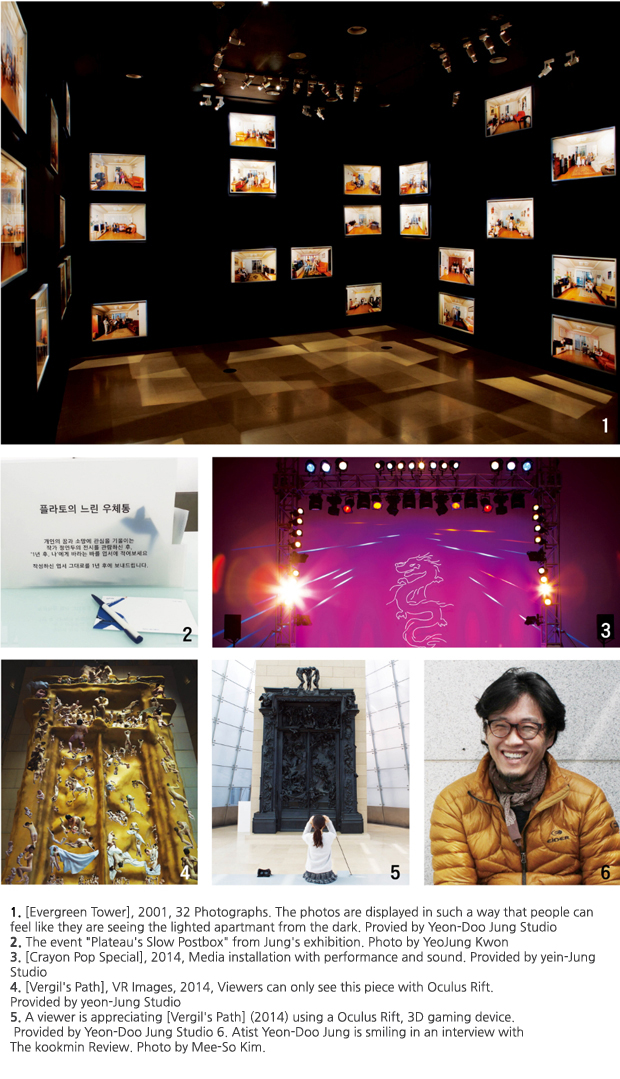