This contest provided an opportunity to those who dreamt of becoming a specialist in the field of future landscape design industry to introduce their creative ideas and a total of 134 teams from 13 countries including Korea, U.S., France, and Belgium participated in heightening the immense interest in the design industry throughout the world. 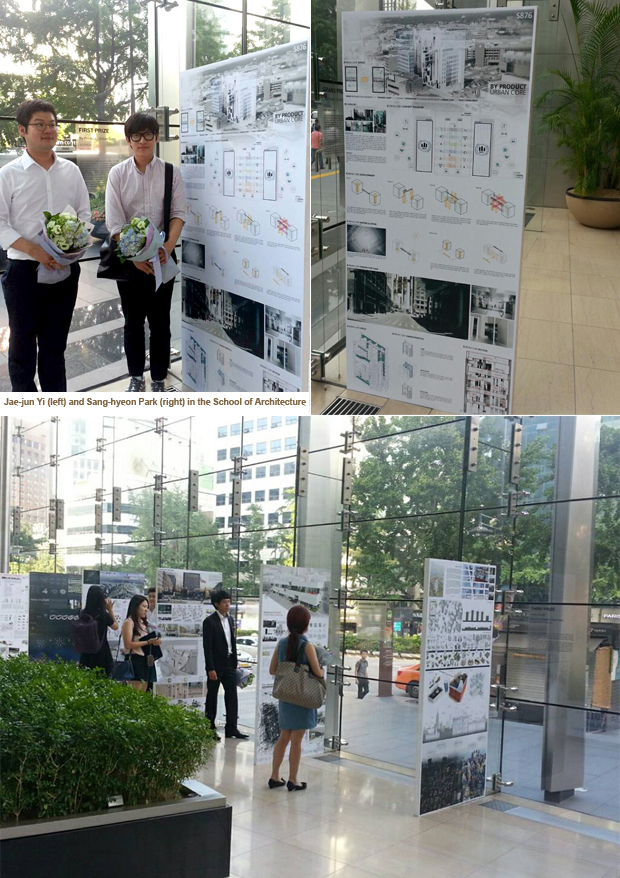 From the past until today, cities have grown based on the development of civilization. Cities repeated expansion and contraction and at the end of the modern society, high-density cities were created. Such was realized because of technical development. Based on this social phenomenon, a high-density city with concentrated high-rises got increased. Thus, we started thinking of the space between buildings that is generated due to the high-rise and concentrated buildings, without considering about a new land to be used as residence. Actually, this space is inevitably created through the construction of buildings and since such space possesses a great deal of potential, various ideas can be proposed.

When it comes to reorganizing the space between buildings, we intended to utilize the facility space that is being increased within a building due to high-rise trend of construction. Since a high-rise requires a variety of facilities, such building is divided into the main (area where people are living) and sub (facility) spaces. In other words, sub-space was generated to support the main space and in a high-rise, such phenomenon is more evident. Eventually, ‘the sub-space’ had been considered to serve a role of supporting the primary function of the ‘main space (mandatory roles).’ Therefore, we intended to propose a new design by utilizing the additional space outside a building that is inevitably generated due to high-rise construction (the space between buildings) and sub-space within a building (facility). Such approach to design the space between buildings is different from the plan that intended to solve the issues raised about disconnected community. Simply put, Urban Core is not only a plan that focuses on a single community but a plan that aims to reorganize subsidiaries (facility, structure, core, and space between buildings) that are increasing geometrically in high-rises.

CEO of Samsung Everland Bong-yeong Kim who attended in the award ceremony held on August 22 in the Korea Chamber of Commerce & Industry said, “It was a meaningful opportunity to witness the sensible and creative ideas of the students who will lead the future landscape industry” and added, “To cultivate the passion and challenging spirit of the young designers, Samsung Everland promises to expand the opportunity of new communication exchange through dynamic events like this.”

The award-winning artworks will be exhibited at the lobby of the Samsung Building in Taepyeong-ro until the 30th.