Recently a dense gray post with a height of 85cm won a prize from the iF design awards in Germany, from among worldwide design awards. This environmental friendly aluminum post made by a design company in Korea is a structure called a bollard, which blocks vehicles from entering onto a sidewalk. This is a public structure already set up in some cities like Seoul. This means public structures,which make up part of Seoul’s scenery, achieved recognition as excellent designsin worldwide publishing.

Bench, streetlamp, bus stop, bollard, trash can, newsstand, even distribution box (facility control system box)… recently, those who carefully look around cities in Korea like Seoul say,"Streets are managed better than ever before."The people who have transplanted‘design DNA’in cities which were mixed up, are a designer group called ‘Design DaDa’ (president Suk Hun Park, 44), which is a specialty company for public design with 18 industrial designers, including President Park. They changed over 70% of the public structures in Seoul and the new city of Dongtan. Now they are designing some of the capital regions like Namhansanseong, a provincial park. 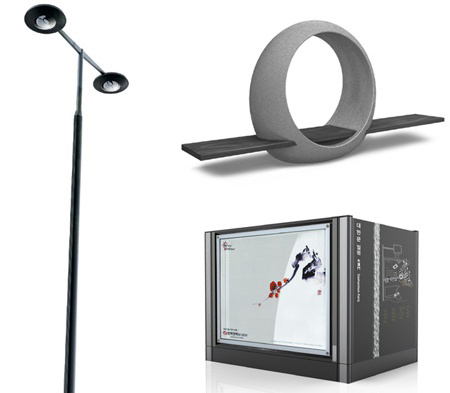 President Park who we recently met said,“We are thinking that when roads, bus stops and squares, which we pass through every day,are designed beautifully,they can be a benefit that everyone can enjoy.”

President Park, who graduated inIndustrial Design atKookmin University,participatedby chance in a public establishment design guidelines contest in Seoul when he won the award. Since then he has been working with'public designs’. He immediatelycreated a company called ‘Design Dada’ with other designers,and when they traveled around for public design in developed countries like Japan and throughoutEurope,they werestunnedbecause of the diversityof scenery. “What was the biggest problem of our city was not having unity and compatibility in design. When we went to this region, this sign; when we went that region, that sign…because it was so disjointed, it was visually complicated making it difficult to harmonize with it.”

‘Design Dada,’upon getting a reward from the contest in 2007,got a public facility contract for the new city of Dongtan, and has been working actively in Seoul public facility designs since 2008.

Their first project were bus stopson the main roads around Songpa-gu and Sinchon. This design of a wooden roof with a simple assembly shape is remarkable. After that they participated in many contests for public structures like streetlamps, trash cans, benches, etc. in Seoul,and changed the face of the city. For example, a kiosk with crude, poor container boxes was turned intooneintegratedto considersweating merchants and citizens who found it uncomfortable to walk, by putting an outdoor fan on the roof.Flower benches (planters) in the square of Gwanghwamunwere also their work. They explained,“We designed those benches for supplementing the city’s square that had no trees.”

We are asking President Parkabout thephilosophy of public design. “Public design must not be proud of its identity. It must be a hiddenexistence, used for relieving the complicated sights of the city.” The city scenery design project from ‘Design dada’has spread to other provincial cities. Recently, they have been working with design guidelines in Changwon, Nonsan, Cheonju, etc.“If we make only one, we would like to make a city where everyone can rest anywhere on benches, where streets will remain for 100 years, without danger. We will participate in the history of a city like that.”
Prev